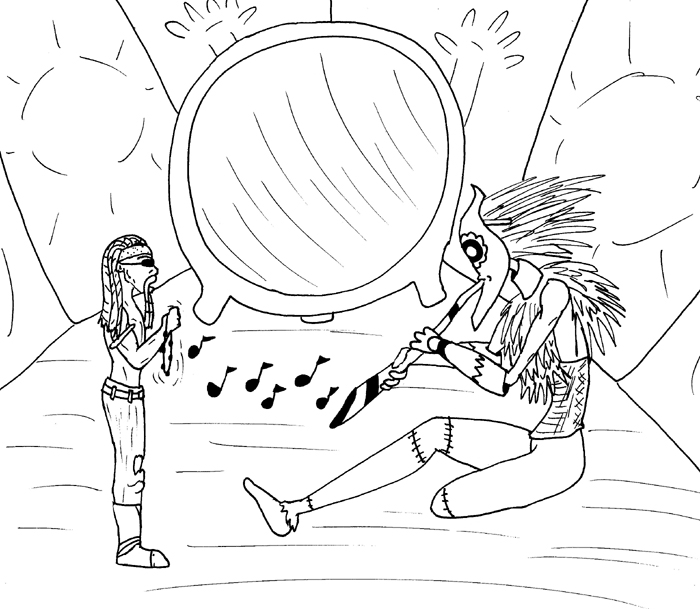 Tulsan was led away by several of the Mimi, who burbled to each other in their incoherent language. With Rottkap attending the party, he hadn't the benefit of her translations, but the underground fae people seemed to be aware of the limitation, as they did not seem to address him directly. Some of them, however, did gesture to Bali-la's necklace around his neck and he already knew they were possessed of some interest in it. Why, however, escaped him.

For his own part, he was curious about the Mimi people, as they were a part of the old stories from his aboriginal ancestry. Or, to some degree. Once, everyone was more spread into individual tribes of origin, each with their own fascinating tales of creation and how the world came to be. But with the end of the human world, those distinctions had faded with the reduced count in overall human population. In Xibalban Australia, the native Aboriginal people had actually fared better than others, but the end result was the same. Humanity's numbers were shattered. Those who survived, would either join small villages like Karolina's, ally with the now defunct Marcus army that Tulsan was once part of, or join a Xibalban tribe proper, feeling the inner instinct within as his cousin, now known as Beltresz, had. There were stragglers and hardcore survivalists out in the wilds, of course, but they were few and far between.

But as far as the topic went, Tulsan was raised with no distinctive identity to his tribe, only that he was a son of this great southern land. His father Jarrah considered the matter of little import. "We had our time. Each with our own faction and identity. It gave us distinction, but in some ways, it was also the convenience of our tribalism. Conflict. Meaningless disagreements projected onto a larger scale. Now, we are one people. Humans. Because we cannot be anything else, unless Xibalba calls us away from it. We do not have the luxury to divide ourselves any further as we once were."

Following the Mimi as they led him, they introduced him to a rounded room composed of the artistic stelas they made. These ones bore simple repeating pictures of suns and hands. A single mirror, shaped almost like an oversized compact, rested against a wall. There, they burbled, pointing at his necklace, and then to the only other person in the room, a Mimi who sat playing the didgeridoo. He was dressed in long pants and shoes, with a straw mantle, and hollowed bracers made of tree branches. His face was particularly peculiar, as it looked to be a reddish spindle mask with flower-like eyes. Or so it seemed, as the figure played, the lips of the mask moved.

The other Mimi left at this point and provided no particular direction for Tulsan. He watched the figure play, as his instrument made the traditional buzzing grunts and audible sound undulations common to it. Strangely, this particular Mimi seemed indifferent to Tulsan's presence, practically ignoring the man.

Confused as to why he was here, he suddenly began to feel his necklace vibrate and hum with internal energy, as if it were reacting to the tune of the didgeridoo. It felt strange, so he took it off and held it in front of him, wondering if the Mimi would react. But he did not, instead continuing to play a song of no seeming beginning or end.

It was then he noticed the mirror began to ripple when the necklace had been raised inadvertently closer to it. Testing the matter, he withdrew it briefly and found the mirror's surface to settle back into a solid form, where once it moved like lapping water.

This time, he raised the necklace once more, only closer to the mirror this time. And there appeared the image of a sultry sky within the mirror, as if he dispelled the reflection. It was clear now that the two items interacted. In fact, it was so transparent, it looked like he could walk into it...

It was only now that he glanced back to the music playing Mimi and figure finally responded with a gentle nod and a gesturing to the mirror with his horn.

"So, this is what you intended. But why?" he asked, not particularly expecting an answer. And none was given. Still, his curiosity compelled him, as he realized this mirror was in fact a portal and the necklace, upon subject to music, was the key. He could think of only one other time where anything even comparable to this happened. And that was with the necklace's original owner, Bali-la.

Remembering that the Mimi were gracious in their hospitality, but also sought to teach the sons of Australia, he nodded back to the musician and boldly walked into the mirror, wondering what would happen next.