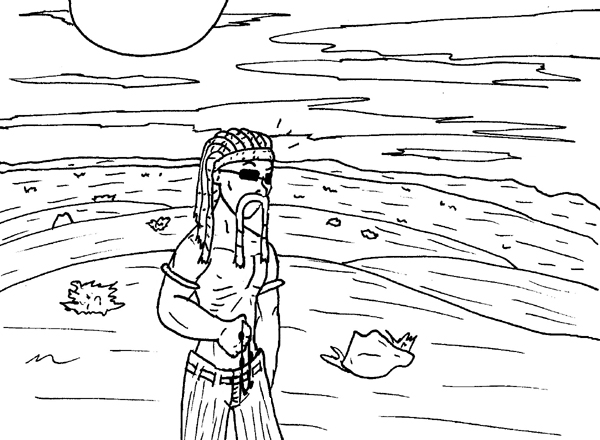 Emerging with nary a blink, but with the sensation of having daydreamed at a relevant moment, Tulsan emerged into a vast barren land of sand, arid soil, and scrub brush. The air was hot and dry. And unlike the surface of what he knew was home, here the sun was blindingly yellow and the sky was a pale blue was creased clouds stretching out in all directions.

Still holding the necklace in his hand, he took a moment to gather himself. What or where was this? Behind him, the giant looking glass was gone. There was neither a Mimi, nor any tone of distant music to remind him of where he came from. It was as though he simply existed here the whole time. Of course, simple memory told him otherwise.

Yet, what of this landscape? It reminded him of several things. Of stories his father Jarrah told him of the time of human dominance, when Xibalba was Earth. When the sun wasn't black and the sky wasn't orange. And as he looked at the beads in his hand once more, it made him think of the Dreamtime and the spiderwoman who gave him the very trinket he held.

He had gone this far, inspired by her final words before she abruptly departed from the knowing world. But he still didn't understand the relevance of most of it. He knew what she asked of him, to help some spirit based Xibalban of a significance before his time, or something to that effect at Uluru, and to take Karolina there for whatever she could do. It was going to be a long trip to complete that favor. Beyond the apparent benevolence of the deed, was there any reason he was doing this? What Bali spoke was her last words, even as her mind seemed to fade into that trance, and even Karolina, whom she spent more time with, didn't really seem to know any particular meaning behind the request. So why? What did he... what were they missing about this scenario? The journey had a rambling unclear quality to it.

And now he was here. Was this a figment of Earth, before the Herald Event? Maybe. It seemed desolate, but beautiful. Not that Xibalba was different in that regard. And didn't the necklace take a person to the Dreamtime? Yet, this place was mundane in all ways, whereas his visit with Bali revealed a more distinctive oddness to things.

Soon, however, a figure appeared in the distance. It stood, waiting. Perhaps watching him. Wondering how much the Mimi were affecting this place or experience, he decided to investigate, as he felt lost in both space and self.