153. Dreaming of the Mountain and the Flower 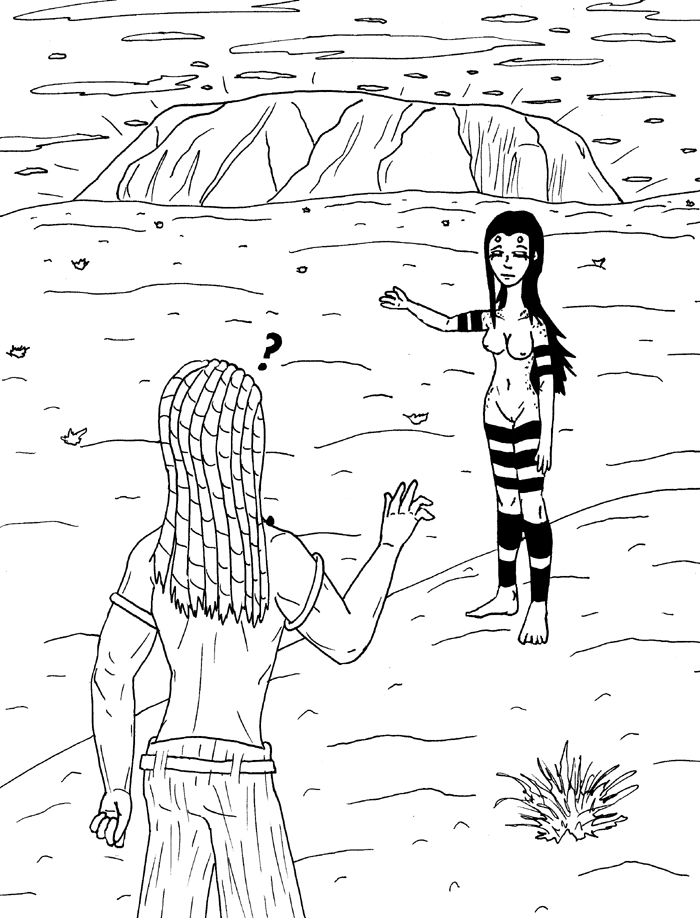 He approached the figure, who stood ever still, ever silent. Upon cresting a short hill, it was there he saw her once more.

The Bell Flower. Bali-la.
The very same he watched walk into the sunset within the Dreamtime when they saved Astrile together, to embrace whatever is considered the equivalent of facing the end of one's days in the world. It was a curious and bittersweet fate for an otherwise ageless race (as were all on Xibalba now) who almost universally would die from violence first. He didn't understand it well at all.

Yet, here she was now. Standing still. Staring. Blank.

She looked much as he remembered her humanoid form, save for a lack of any modesty (apparently one truly couldn't 'take it with you') and vacant white eyes. There were other details missing as well, and they were small but telling. She didn't blink. Her stillness was almost statue like, instead of the subtle fidgets all beings had. And her chest failed to breathe.

Had she not gently raised an arm to gesture behind her to the horizon, she easily could have been mistaken for an inanimate object. But even that brief motion seemed alien now.

In the distance, it was there he saw the vision of a mountain. It reminded him of a molar tooth in some ways, but they called it the Navel of the World for some reason. Ayers Rock, aka Uluru. It was the grand destination, without a doubt, and the very same that Bali-la beckoned to he and Karolina seek for the Xibalba who supposedly awaited them there. He had never seen it in person, but it fit the description his father gave to him before the journey began. It was both mundane and yet oddly majestic in ways he couldn't quite explain, beyond a feeling in his core.

Distracted by it, he could feel an image or an impulse in his mind. It developed from a murkiness born of his subconscious thought, but ultimately became tangible. He felt certain he could use Blood Sensing to find the mountain more directly now. It was as though a missing puzzle piece, once imagined from being the last remaining shape amongst all the others, had been found. He had only to reach for it, and complete it.

Feeling emboldened, he looked back to Bali-la, and remembered once more how he got here. Again, where was this? Why was she here? Was he imagining her or was she some kind of specter in his vision quest? His thoughts briefly went back to earlier, when Ishmael and Karolina seemed to put together that the spirit of Bali somehow led the former to them. So maybe she was trying to help, even now.

But... she was dead still. Not like Siouxsie, where the body of someone was reanimated. Or a shadowperson of some kind, as they had described Atacama from Karolina's ritual. This was someone he knew in passing, but acted noble before she left, and made an impression on him. And upon Karolina, no doubt an even strong one.

He went to reach out to her, only to pause, as Bali just stared, mute and without reaction. She was both familiar and haunting. Only her wild mane of black hair blew to the east in a lonely wind. He didn't know how to react to someone like this. What was beyond the living world of Xibalba as he knew it? What happened to those who walked into the sunset, driven by a death spiral trance? Even Xibalbans were said not to know, only that they would be called, and so the dance of life would end.

Often muted feelings rose in his throat and heart. Things Xibalba typically had scoured clean of him in the past. And he didn't know what to do with them.

"Bali, I..." He stammered, not even clear with himself of what to say.

So, he stood there. And she did the same, not even lowering her arm, as if it needed no rest.

"Are... are you okay? With whatever happened to you?" He graveled out with his low deep voice. He felt like a child trying to understand death for the first time. He was no stranger to the topic, but he felt utterly ignorant and naive now.

She gave no answer, nor even a sign that she heard him, despite being only twenty or so feet away.

He took a deep breath.

"We're doing as you asked. Karolina, myself, and others... I don't fully understand why you want us to meet this Xibalban at Uluru, but I guess you were the altruistic type. Karolina would lead me to think that, at least. And... what you did for Astrile was... well, I haven't forgotten it."

He rubbed his brow. Why was he feeling sad? It made no sense.
"I wish I had more time to know you. Watching you go all of the sudden... well, I feel like Karolina should have been the one to be there with you. Not a stranger like me. And, um... I should have been a little less fake and a lot less cold when I first met you. That accent I tried pulling off... I don't even know why I thought that was a good idea anymore." He chuckled awkwardly to himself.

"Goddamnit... what... what am I supposed to say here? I don't know. This isn't me. Right? We're not old friends. We just had our little adventure and... that was it." He gazed at the ground, glancing upon the black bead necklace around his neck that was once hers. "This pendant. I get that it was some kind of bond between our ancestors. And some underground fairies, the Mimi, seemed to have taken an interest in it... which is, uh, how I'm here. I just... I don't know, feel like Karolina should have it, no? You two were close. Meeting you, from what I've overhead, made her into a whole new person."

"I think you'd be proud of her. I'd like to imagine that, anyway. I don't really know."

At this point, Bali had finally lowered her arm from presenting Uluru, as he noticed when he looked up. He couldn't read her. Was she happy? Sad? Her entire body felt like a mask.

"I'll see this through," he concluded. "Don't worry about that. It's the least I could do. Frankly, I don't understand anything that's happened since we met. I felt bad, admittedly uncharacteristic of myself, when I learned Astrile was slowly dying of shadow poisoning. I didn't like any Xibalbans prior to that. But I knew she wasn't a threat, nor did she try. Maybe I just pitied her? Eh. And you, well... why didn't I meet any of you earlier in life?"

He sighed, beginning to feel mentally and emotionally exhausted. He had done nothing but talk and with nothing being fed back to him. "I guess there's nothing else... you're a strange one, Bali. Strange, but good."

"Before I go back... is there anything? Anything at all that you want to say? To me, to Karolina... whoever. I don't know if I'm imagining this or this is real or what in the world is happening. But I'm willing to bet I might not meet you like this again any time soon. Or perhaps, ever again. So, I'll ask once more... is there anything I should take back."

They stared at each other for what seemed like a solid minute.

Then, Bali moved her hand slowly, but gracefully. A very small smile could be seen on her lips.

Once to her eye.

Once to her heart.

And with both arms, she slowly spread her hands wide, all encompassing.

As his vision began to fade and he heard the distant sound of a small bell chiming over a soft wind, he recalled her very last words to him before she had walked into the sunset. They still held.

"Tell them I loved everyone. I did."

For her silence, nothing new needed to have been said. The message still held.
Only now, he finally could feel it.

The ultimate end of a quest to the navel of everything is the self.