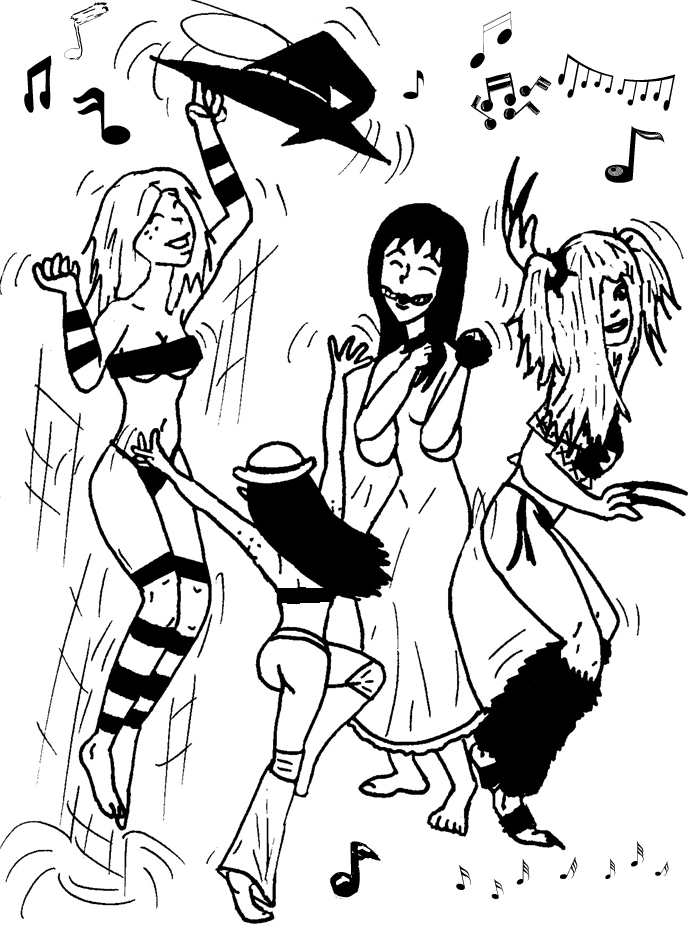 You know, for all the mysticism, adventure, and danger I've experienced since leaving Adelaide, sometimes the basics are pretty exciting too. After Siouxsie and I shared a rather large slice of cantaloupe, it was difficult not to feel the energy in the room with all the Mimi and Rottkap dancing.

We joined our little friend on the dance floor and I'd swear I didn't know where she was getting the moves she was pulling off from. Didn't she just get her legs?? She only had a mono-pod to bounce around on before. I've been walking for most of my twenty plus years and I couldn't fathom how she was so energetic and graceful. I bet Bali would have loved meeting Rottkap like this.

"How are you doing this?" I asked her above the music, admittedly impressed. She was bopping back and forth, doing pirouettes, and all kinds of moves I would have associated with someone who spent years learning fancy footwork.

"It's easy!" she shouted back, quite happy sounding. "Just don't think about it and go with the music!"

"Don't think about it...?" Heck, I was having a hard time just trying to envision not thinking about it! How does one turn off that part of their brain on command?

"You have to let it happen! Kara, no one cares here if you can dance or not, just move and groove. You gotta be able to feel some kind of beat in the air, right?"

I did, although I couldn't follow the music exactly. It reminded me of the waves of the ocean I washed up on. Coming and going, sometimes slowly, and then sometimes crashing with force. It was chaotic and-

Just then, Ishmael came by and placed a mug of spiced sangria in my hand. "Rottkap has a point. If you're overthinking it, it won't flow. And I can see it on your face. Look, not to step out of place here, but you have to embrace the moment. Don't wonder about it, just let your feet and your hands move with the sound. And hey, if all else fails, have a few of these!" She grinned and joined Rottkap.

Ishmael wasn't quite as frenetic as Rottkap was, but this likely wasn't her first dance either. Raising her talon tipped hands in the air, she shook her hips and took confident lithe steps that seemed to be flirting with no one and everyone. I blushed for a moment, if just because she was a lot more, shall we say, physically matured and she wasn't afraid to follow the rhythm in a more sultry way. I know she drank a few of these mugs too, although she didn't seem drunk either.

I began to take a few drinks. It was sweet with all manner of fruits and spices, but I couldn't place more than a few of them. Hey, if it could help someone loosen up, maybe this was just what I needed. It definitely went down a little easier than that Pepper Brew stuff Brand made, but then again, I liked sweet things a bit more than beer. All in all, it wasn't bad.

And now, Siouxsie, who had been watching our friends quietly, grinned and got involved. "This... look fun!" she exclaimed. Bless her, she wasn't particularly agile in her movements or doing anything exotic, but she didn't blink for a second when she got out there and did this cute little lateral shimmy with her arms and head. It made me think of someone playing the maracas. Really, she just did the same few moves over and over, but it was world's above anything I could do on the spot. Or so I thought.

Well! This wasn't going to do. Even my zombie friend was moving and shaking out there, while I stood there like some flatfooted voyeur, overthinking. With the taste of the last drops of sangria on my tongue, I began to feel not only the music, but the confidence of my friends. Didn't I leave Adelaide because I was living such a stodgy boring existence?

It was important to remember such things. Maybe just tonight, at least, I could stop trying, stop worrying, and definitely stop over analyzing. I immediately made for the drink table and got myself another sangria. I power chugged that bad boy as I returned, to Ishmael's applause. "Do it, Kara! You show that cup who's boss! Ha ha!"

Wiping my chin, I smiled, and took my hat off. Just for tonight, I wasn't going to be the mediocre shovel witch on some scary strange journey. I would be Karolina and I would be dancing at the last goddamned party in Xibalban Australia for several hundred miles. Heck yeah!

So, I'll admit the sangria helped at least. Over the next hour, I just followed the sound, not my own anxiety and determinations. And I loved it. I understood why Bali seemed to love dancing. It was a stress breaker. Sure, I didn't know what I was doing whatsoever. I mainly jumped around, pounded my fists into the air as I cheered to the music, and spun my hat around on my finger like a hula hoop. But it was so liberating! I'm not sure I ever consciously realized how much I just wanted to cut loose occasionally and just have some fun. The adventuring played into that, I'm sure, but there were no enemies here, no threats. The Mimi danced. We danced. One hour turned to two and then several more. It was a sweaty haze and exhausting, but none of us wanted to stop for long, beyond getting another drink or snack.

I'm not sure exactly how long we were at it, but I could see why the Mimi seemed dedicated to this, from what Rottkap had mentioned to me. The world under the orange sky is a dark place. It's unforgiving, grim, and flat out depressive, if not scary.

But tonight, I reached a new plateau with myself. I think this was part of what Bali-la wanted to see in me all along. The ability to feel like a living breathing person. Not the shovel witch or a remnant of my terrible former self. There were no maudlin or traumatic stories to tell. No anxiety, fear, or doubt.

Just Karolina and the ability to feel her friends, new and old, all around her.

Wheeeee! Nice interlude - time to relax, heal body and spirit, and prepare for what comes.

Aye, just a something a bit less dark for the moment. It can't all be unrelenting.