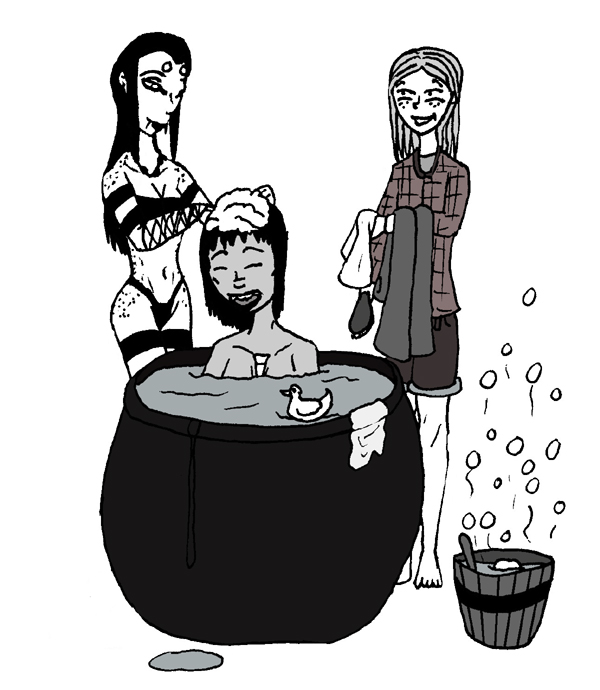 The next day, she awoke to the sound of birds beyond the frame of her window. The rain had stopped and the little creatures were surely splashing nicely in the puddles, if not drinking their fill. And beneath the tower, another tone emanated. It was the ethereal melody of that unusual singing she heard last afternoon. Bali-la was awake in the cellar, to no doubt.

Noticing the bag of 'strange fabric' still left in the room from yesterday, Karolina partook of another apple to start the day, and proceeded to get dressed. Feeling uncommonly relaxed and casual, she donned an old blue plaid flannel over an undershirt and hiked up a pair of cuffed khaki style shorts. The act reminded her to bring Siouxsie a change of clothes, so she made a quick grab for some raiments that she felt content never to get back again.

Far downstairs, she found Bali performing a song for Siouxsie, who seemed enraptured by it. The zombie woman was no longer in a web (indeed, it was strangely gone altogether), but she was still otherwise cocooned and in visibly good spirits. Karolina paused to listen to the odd syllabic song, letting the seeming nonsense sounds and intonations flow through her. Was it some kind of Xibalban language, she wondered? But she corrected herself, recalling that the village people of Adelaide told her that everyone spoke the same language since the Herald event. Odd how the world worked, Karolina idly observed.

Bali took notice of her host and with a smile, closed out her song in a way that seemed as though she planned the notes to conclude that way. "Good morning, Karolina. You look content."

"Hey Bali. I slept really good. I feel great. How about you?"

"I'm glad to hear that. Mm, mine could have been better. It's not a knock against the accommodations. I just don't sleep as well as I'd like," said Bali.

"Sorry to hear that. Hmm. What about her?" the witch asked, gesturing to the zombie.

"Ah. Well... I'm not sure, ha ha. We spoke for a bit last night before I retired. I woke up several times, but she wasn't so much sleeping as staring off into space rigidly. I can tell you that she wasn't responsive in the least. I think she's capable of entering some kind of torpor state. Or she's a really deep sleeper and can do it with her eyes open."

"Huh. There's a lot we can only guess about her. Oh... uh, maybe I shouldn't be talking about her like she's not here. I'm sorry, Siouxsie. That was rude of me."

The zombie looked up with an oblivious grin, as if not aware of anything until she was addressed. "Freeeend," she slurred throatily.

The zombie just stared, her attention wandering after a short period of time, as if the question had never been asked. There was no sign that she understood it, let alone had a response.

Bali gingerly stepped closer to Karolina and whispered in her ear. "Just to let you know, she's not able to understand or process certain things from what I can tell. At least, not yet. Particularly, she isn't good at responding to questions requiring self awareness. She'll blurt things out sometimes, but she's not part of the 'I think, therefore I am' school of existing. I'd say just give her time. Actually... you said you dealt with her a little bit when you first raised her. Was she like this?"

Karolina pursed her lips, pondering information that she had long made efforts to forget. "Well, maybe a bit. I don't remember it too clearly now, to be honest. She had longer hair back then... I recall that more than anything else. But I could get simple responses out of her."

"Mm. Let's just take it easy on her now. She had been in a frenzy state for a scary amount of time. Some Xibalbans don't come back when they've been starved like that for long periods. They just stay as wild beasts."

Karolina frowned. But Bali patted her on the shoulder. "Hey, don't worry about that. She could be worse! Do you remember what I said yesterday?"

It took Karolina a moment, but her face brightened as the words came to her. "All we can try to do is make things right sometimes."

"Right!" beamed Bali-la. "Now, what say we give this little zombie a proper bath? Do you have anything for that we could use?"

"Oh yes, absolutely. I've got a cauldron, some old soap... there's a functioning well nearby. We should do this outside, though. The water will be a bit cold. We can pre-heat the pot safely outdoors, you see. The cellar isn't well ventilated for that kind of job."

About half an hour later, everything was set. A large heavy cauldron had been rolled out the protective doors of the light house and with some fire, the two heated it up to at least a warm temperature. It was already hot outside, but the shock of cold water could have been unpleasant, and Bali wanted to scrub the zombie good. While they prepared, Karolina found a spare brush and some shampoo powder that the village's late herbalist had made.

Siouxsie was proving rather patient and easy to work with. She sat nearby, watching whatever moved. Her expression was that of someone discovering many new ideas at once, such as clouds, sunlight, rocks, and water. She had trouble speaking the words that represented these things, but she otherwise seemed to be a sponge, ready to sop up basic information. Karolina found it charming, in a way. She couldn't recall the last time she observed anyone else actually enjoy learning new things. She began to hold the opinion that Siouxsie was, in many ways, child-like. It was quite the different impression she made from the mausoleum the other night!

Bali helped the zombie out of the cocoon and eased her into the warmed cauldron. An old rubber duck was placed on the surface of the water and this seemed to delight her. "Beyrd!"

"That's right, Siouxsie. That bird is called a duck. Isn't it cute? You can play with it, if you like."

Bali worked up a nice lather in the zombie's hair. And Siouxsie just seemed to laugh hoarsely at the feeling. Karolina watched, mostly bemused, but she was also concerned for a time. Her experience in dealing with corpses indicated that a dead body in continued contact with water made for a... disgusting scenario. And it didn't occur to her until the bath was well underway. This was further made worrying since Siouxsie had flesh exposed joints about her arms and legs. Fortunately, nothing so displeasing came to pass. Much in the sense that Siouxsie didn't bleed from those joints, she also didn't absorb water. For this, Karolina was eternally grateful. She also noticed that her skin was strong like someone living. Dead bodies tended to slough. And Bali's hair washing could have normally caused an incident.

But then again, this was all magic, wasn't it? Karolina wondered how the rules worked. Siouxsie was dead, but perhaps being undead changed a few qualities about her form beyond simply animating it. It was intriguing. Karolina wondered again what the spell was really supposed to do... bring someone back to life as she thought? Or had she not messed up the spell and a zombie like Siouxsie was the actual design? She wished her mentor was around to field such a series of questions.

"So, Karolina..." Bali said, interrupting a train of thought. "What's on the agenda for you today?"

"You mean you dig graves every single day?"

"Well, yes. Essentially. My father and mother instilled me with the 'virtues of hard work'. It's kind of hard to shake. And this village never seems to be finished, it feels like. Hm. So, what about you? Heading out today?"

Bali had a funny expression on her face, like that of a Mona Lisa painting. Karolina couldn't place the meaning. "I suppose so. In the spirit of what I asked yesterday, I only intended to stay one day. I feel like I've imposed a great deal as it is."

It hit Karolina then that Siouxsie would be her responsibility going forward. It only made sense, but she hadn't thought that far ahead. Yesterday was a doozy.

"But, I should be getting on soon," Bali said conclusively. "I'm no grave digger, sorry to say. I like to travel the land. See the sights and the people- you know how it is."

The witch felt her heart grow heavy. She didn't know. At all. She had been isolated in the middle of a dead village for years now, organizing and burying the entire populace by herself. And now, her only companion would be a zombie woman who was fascinated by the idea of a rubber duck. She went quiet, staring at the drying earth as she held a change of clothes for the zombie.

"Pass me that brush, Kara?" she heard after several minutes. It seemed to rouse her. Kara? Did I just get a nickname, she thought to herself.

"Oh, um, sure..." Karolina said, briefly shaking herself out of some existential fog, as she traded the cleaning implement. Kara, huh? It had a nice casual ring to it. She never had a nickname before, by her recall. Especially since she was adamant about not having her mother's name for a moniker.

The shovel witch looked off to the side, eyeing up a distant pile of bones that had required organizing. She frowned, as they had been dashed to the dust by last night's storm. The scattered remains were bleached wherever the arid grit of Australia did not cover them. It would take hours just to arrange the pile again in a way that made sense for future sorting. 'All those people, once distinctive, now just lost pieces of a forensic puzzle.' All of them, baking anonymously in the sun under the unearthly dull orange sky of Xibalba. A tiny green bottle fly landed on her eyebrow. But she wasn't in her body and the little creature licked the salt of her sweat without need of discretion.

"Don't leave me here," the witch said quietly, staring ever locked onto those white bones far afield instead of with her guest. "Please."

Bali's hand slowed its washing motions on Siouxsie's back. "I see..."

The shiny verdant bottle fly twitched as it was want to do and buzzed away, flying aimlessly to whatever random eddy of an air current caught its attention.