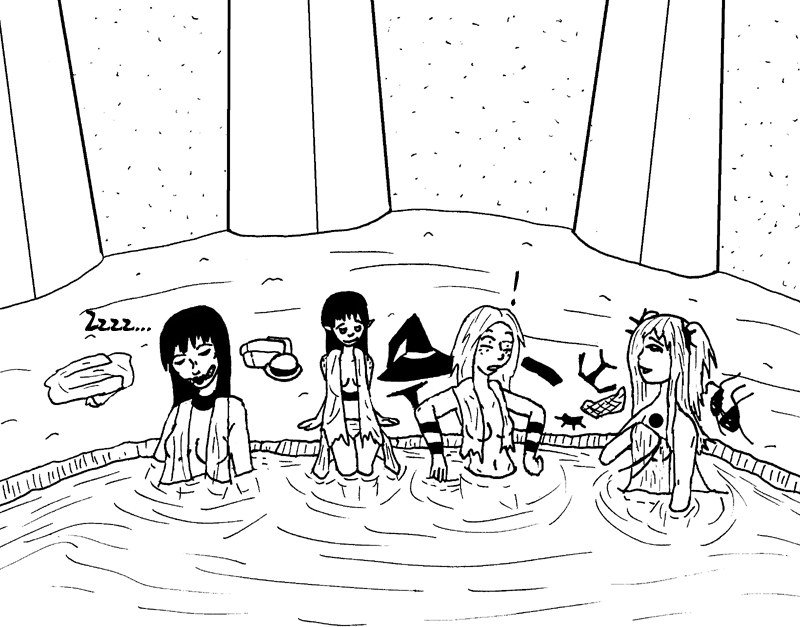 As the night went on, it was inevitable that we would get tired. Dancing for hours is fun, but physically punishing. Eventually, all the drinks and refreshing fruit isn't going to cut it anymore.

Rott was the first to call it and she could see we were running on fumes. As our resident translator, she asked if there was some place we could crash. It turned out they actually had a makeshift guest area for the rare friendly visitors they would meet. We thanked the Mimi again for their hospitality, and they showed us to a little alcove by one of their quieter halls.

By this point, we were physically exhausted. But our spirits rose a bit when we found the little side chamber had not only individual rooms for us (albeit with large Mimi sized doors), and a communal bathing cistern in the lobby. Yeah, after all that dancing around and muscle soreness, that water was looking mighty inviting. With that, the Mimi said they would seek us again tomorrow once we were rested, although I wasn't certain as to what they were planning.

I was also informed that Tulsan was in his own room at this point, but he arrived a couple hours ago. The Mimi mentioned he seemed moody and wanted to be alone. I could fully believe the latter, but I'm not sure how much I ever saw of a mood from him, as he was often rather stoic and practical. Maybe they read into something that wasn't there?

In our rooms, we found very simple furnishings and a few pieces of fabric that looked to be towels. Was this what a hotel from the old days was supposed to be like? If so, we were definitely enjoying it.

Tom and Metis parked themselves in my room for the night. Apparently, they were hanging out by the food table on the dance floor. Metis seemed particularly sluggish and drowsy. I asked her what was wrong, but she waved me off with one of her forelegs, almost embarrassed over something. When I asked Tom about it, he chuckled and said she had 'the itis'. Apparently, my familiar was pigging out on the free meat cuts. I never took her as the type to do that. Huh.

Tulsan didn't make any noise I could hear from his room, so I took this as a sign that he was sleeping. "I guess we can enjoy the pool for now, but let's keep it quiet," I whispered. My friends seemed quite willing to oblidge this, if just because everyone was sort of drained by this point.

We got undressed and slid into the pool. It was a bit shallow, but on the warm side, perhaps fed by some thermal vent. Let me tell you, it felt heavenly. My, well, everything hurt. Feet, legs, back, you name it. Hiking through Xibalba wasn't even as taxing as this had felt. I'm sure my mother would have called it good exercise, at the very least.

I reflected on the last time I bathed in the company of anyone else as I sat there, soaking in the heat. Ignoring that scary underwater swim with Saiya at the end of the sand cave, I thought back to how Bali and I washed off in that little underground creek before we found her. I was particularly sheepish back then, although I guess in the scheme of things, it wasn't some impossibly long time ago. Hrm. Still, it was a nice experience and I learned how not prudish Xibalbans could be, at least compared to myself. I hope I made some progress since then.

After a while of some idle chatter, we noticed Siouxsie dozed off, simply sitting in place with her back against the pool's edge. I couldn't blame her, really. I was probably going to sleep like a rock tonight too.

"I think I'm going to take cue from Siouxsie here," said Rottkap, looking happy but almost deliriously tired. "I'll help get her to bed. Then, I'm going to turn in too. Tonight was a ton of fun. I didn't think we'd ever get to do something like this."

"It was pretty nice," agreed Ishmael. "Maybe we can do that again sometime."

The little fairy clambered out of the pool, waved goodnight, and with some effort, dragged Siouxsie out with her, helping the zombie to a room. "Have a good one, everybody," she smiled. We waved back and I leaned by head against the stone edge of the pool, staring upwards for a time.

Ish and I sat quietly, and I assumed she was just relaxing as I was.

"So, do you like being group Alpha, Karolina?" she asked casually.

"That's good," she sighed contentedly. "I've never really been part of any group for long, at least, not a traveling one that wasn't other Death Clan. It's nice. I like the camaraderie I see in everyone."

I shook my head. "Not particularly. You're more expressive than Tulsan is, at least."

She chuckled. After a moment, she asked, "Mind if I ask you a personal question?"

I sat up, feeling pretty mellow and a bit melted at the same time. "Shoot."

I blinked. "Huh? Oh. Oh, no, nothing like that. He's nice, but I don't think we see each other like that. We're really just working together to reach Uluru. I also know he doesn't see himself as being 'part' of this group in the truest sense. He's very much a loner. I can't say he opens up much."

I paused and smirked at Ishmael. "Why? Are you interested in him?"

She smiled bashfully. "Ah... well, he's got a great physique and he's got a distinctive face I like. But I don't think he really trusts me yet. Not fully. I get it. I'm new and all that."

"Well, that might be part of it," I sighed. "I've come to understand that to some degree he either doesn't or at least did not- I'm not clear which... like Xibalbans much. I think Bali-la got through to him on some level, though. Just give him time. Let him get to know you."

"I see," she said with a nod. She pursed her lips and then looked back to me again, smiling with bemusement. "Anyway, I think I'm going to turn in, too. But you know? If you'd like to join me, I'm sure we could still find something fun to do tonight."

I raised a brow. "Hm?" So, I'm not always the sharpest tool in the shed or the fastest horse in a race, particularly when it comes to social matters. "Do you have cards or something?"

She stood up from the water, holding a towel to her chest and just looked at me with incredible amusement. "You... really don't know what I mean? Great spirits, that's cute. Karolina, I wasn't exactly asking about Tulsan when I was wondering about the two of you." She tilted her head down a bit, looking directly at me.

I sat there for a moment, not following this. Maybe I was just tired or it took me by such surprise before I figured out what she meant. "Wait... what?" My eyes widened and I felt a familiar tinge of anxiety. "But... but... we just met...?" Where did this come from?? How oblivious have I been today?

"What of it?" she asked, sounding like it didn't matter whatsoever. "I'm not asking for your hand in marriage here, Karolina. I just want to know if you would to 'play' with me. It doesn't need to mean anything more than that. I mean... forgive me if that's not your thing. I totally understand. It's just an offer, I'm not insisting you do anything if you're not feeling it."

"I've just... I haven't been asked like this before. At least not by another girl," I stammered, blushing. "You really don't care that we just met?"

She took in a deep breath. "Well, I realize that humans are bit different about it sometimes. Xibalbans... as for us, we're kinda frisky, if I'm being frank. My tribe in particular. Just runs in the blood, I guess. There isn't necessarily this big wall of time, for when the right moment is for us. But you said you were never asked by another girl before?"

I went beet red and looked down, avoiding her gaze. "I, uh... I've come to understand I had a sort of... attraction to Bali-la. I just didn't know how in the world to express it. I was too green at everything in life to really process it."

"Ultimately, nothing," I sighed. "She kissed me once, but it was to save my life from drowning, to be honest. Still, it was like electric. And... I saw her do something to an Ophidian girl once. It disgusted me at first, but I couldn't stop watching. I was really confused about what I was feeling."

"It wasn't sexual. Not really," I said, still avoiding Ishmael's gaze. My memory of what happened in the sand cave with Saiya was still very clear to me. "But, it absolutely felt like it. Bali caught the Ophidian in a web, tied her up a bit... then she was clinging onto her and started feeding... it was intense. I was just watching from the sidelines and the two of them treated it like it was no big thing in the long run, but I never saw anyone... do something like that before." My face was burning hot. "Part of me... wanted to experience something like that with her. I was so goddamned difficult with her every step of the way, but I think that I really just trusted her more than I was ever willing to admit. I just didn't understand anything and I was emotionally rigid. It couldn't have gone anywhere."

"Hmm. Hey... look up, okay? It's all right." she asked, after listening. I did as she requested, feeling embarrassed.

Her expression was soft but more neutral now. "I think I understand what you dealt with. We don't all go into life with as much confidence or perspective as we'd like, particularly when it comes to our opportunities and desires. But, I want you to know... although we're of the same tribe, I cannot be Bali-la for you or anyone else. What you and your friend had is ultimately your treasure."

"But, if you want to think about it and decide you're interested, come to my room in the next ten minutes. I'll stay up that long, at least. I won't do anything you don't want to do, but if you are intrigued, we can take it slow and go only as far as you're comfortable with. Including the stuff you mentioned- it comes pretty naturally to the Death Clan. To me, this is a positive activity and I don't have trouble compartmentalizing that fact. I like to have fun and feel good. I think you're pretty sexy with your striped body, cute face, and your witchy clothes. And I want to say I'm pretty sure I saw you looking at me a certain way a few times today, from when we met to the dance floor. Maybe I'm wrong, I don't know."

"If I'm not your cup of tea, no worries. Just figured I'd make mention of it. We'll all call it a night and we'll meet again in the morning. I won't think any less of you for it. It has been a long day, at the very least."

She got out of the pool, slowly, bending over seductively as she looked back at me. "But I hope to see you soon, Kara," she said with a flirty wink. Dripping with confidence and beads of water, she picked up her clothes and went to her room, closing the door behind her.

Uncertain, I had to decide...