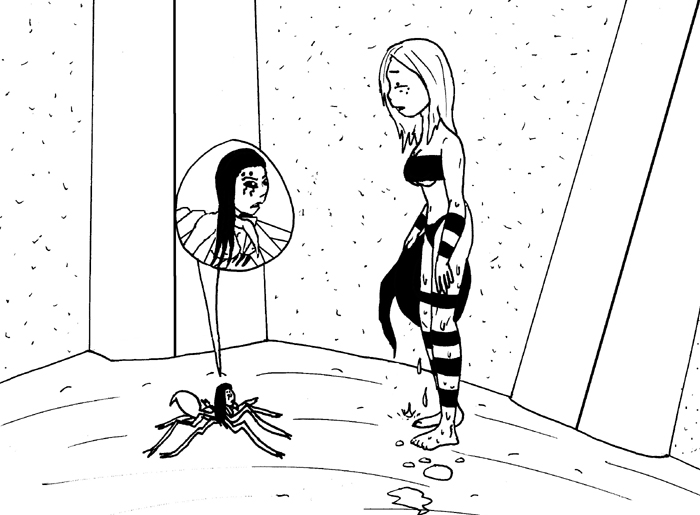 She had climbed out of the water and patted herself dry, although she still dripped upon the stone floor. The shovel witch stood alone, surrounded by the closed doors of her party and the pool itself.

There were many things to consider from Ishmael's offer. Most notably among them being her own unfamiliarity of having a roll in the hay with someone who could only be described as a friendly acquaintance. The Death Clan woman seemed to have no concerns about the ties of familiarity. It was an activity. It was fun and it felt good. No one was seemingly a threat to each other, so why not cap off the night with a romp? For her own sake, Karolina lived a comparatively more conservative life by comparison and hadn't even made a move on Bali when she was around, although that was another story altogether in some ways.

She tried to think about the last time that anyone even suggested such a thing with her. Largely ignored or derided by her peers back in Adelaide, it was hard to be all that desirable to anyone as the resident grave digger's daughter, particularly one who spent hours most every day helping with the family trade. There was one time, however.

To some embarrassment, she couldn't remember the boy's name at this point. He flirted with her seemingly out of the blue, often during breaks when her parents weren't around. Things started simply enough. Some kind words, a listening ear, and really, just someone who was willing to show her some attention. Her father, in particular, had no fascination with the youth, so it made their meetings a bit random.

A bit of time had passed. And while they hadn't gone steady, they were both young, and did what came naturally after a point. Karolina recalled it wasn't just once either, but several times over a few weeks. To her recollection, his family worked in livestock, so whenever the barn loft wasn't in use...

It wasn't the most romantic location and he didn't always say the right thing, but the act itself... the attention, the excitement of it all... well, it was a fun few weeks. But such things weren't meant to last.

Eventually, he succumbed to peer pressure, and would eventually show little interest in her or outright mock Karolina as a backwards weirdo for being the grave digger's daughter. Kids of any age can be cruel and so she never talked to him (or any of them, really) again, as it left her feeling used, as if she were just some curiousity to satisfy their boredom in a dull town. Her parents eventually learned of the tryst and chewed her out at first, but were ultimately glad nothing had happened. She was given a refresher of the end-of-the-world version of the birds and the bees. As for the now nameless boy, she seemed to recall her father threatened to bury him upside down in an unlisted grave if he even stepped in the cemetery ever again. He probably wasn't serious. Well, most likely not, anyway.

From there... it had been a dry spell as far as the company of others was concerned. She couldn't even recall feeling interested in anyone after her rendezvous, at least until Bali-la showed up. At the time, she had grown very suspicious and distrusting of everyone, and that reached back to when people were still around.

So, to be called upon for a little nookie with a relative stranger, well... it took some thinking.

Ishmael wasn't exactly wrong. Karolina had looked at her a few times since they were introduced. It was somewhat with curiosity, but occasionally with some admiration of her confidence and physical features. Also knowing what a spider woman could do, after seeing what happened with Saiya in the sand cave... Karolina had never really forgotten it.

But Ishmael was needlessly cautious in how she spoke on one part. Karolina did not see her as a substitute or replacement for Bali, despite their shared clan affinity. Bali-la was Bali-la.

She thought about how the day had loosened her up a bit and she felt more confident in herself, but here she was now, analyzing everything and feeling uncertain. It didn't set a romantic or sexy tone, unfortunately. She was admittedly intrigued by Ishmael's offer, though. An unexpected night of fun with someone so pretty? And a woman at that? Karolina knew she wasn't against the idea whatsoever after meeting Bali, at least. The idea that she had to pick a sexual identity seemed a bit meaningless and undefined to her, as if it didn't matter. Too little focus was placed upon the topic in her life. And for another thing, what other options could she expect out here?

Tulsan seemed unapproachable. He was in great shape and very manly, but nothing about him suggested warmth or that he wanted to get to know her beyond a practical level for reaching Uluru. Siouxsie was more or less a living corpse and given her mindset, even if she wasn't undead, it would have felt like taking advantage of her. Karolina knew all too well that the zombie didn't understand some things. Rottkap was cute as a little fairy, but she didn't necessarily see the impy little retired envoy in that way. And although Rottkap had matured features now since she was a humanoid, the size difference was a bit pronounced. Rottkap was also very new to her current body and hadn't ever shown signs of any interest whatsoever even before the transformation. So really, if it wasn't Ishmael, what was there? Just forsake that part of herself? She barely even had privacy as of late...

Just then, she noticed Metis had emerged from their room and approached Karolina. Her expression was that usual dour look of suspicion and distaste.

"Oh, hey. I thought you were heading to bed? Tom said you stuffed yourself something fierce at the food table," said Karolina, welcoming the moment of distraction.

Her familiar gazed up at her with typical severe eyes. *Let us speak discreetly, Master.* came a telepathic voice from the spiderling.

*Ah, right. I had forgotten.* apologized the witch.

*Rumors of my food indulgence have been... exaggerated,* claimed Metis, side glancing towards her door briefly. *I merely let Tom think that. I could have continued feasting if I chose. But that is neither here nor there.*

*So, what's on your mind? We haven't really spoken much today.* Or in general, she reflected to herself.

The spiderling sighed. *You, namely. Whether I desire it or not, I am at least always somewhat privy to your thoughts and mood. Doubtless, I would have little rest if I were to listen to your mind go back and forth over such a simple topic.*

Karolina couldn't help but smirk a little. *You're, uh, going to give me advice on my love life, are you? I didn't think someone who was summoned from the aethers just the other day would have much to say, to be honest.*

Metis glared for a moment. *Before anything else, let me address this for you. YOU DID NOT MAKE ME. I was merely called by the ritual Tom showed you. I am bound to you and we have a link. But I was not made of your flesh and blood or anything else, in the way that Tom and Brand are one. Understand this- I existed before you or your predecessor, or even your family were alive.*

Karolina's smirk melted. This was new information. *Huh? What does that mean?*

Metis calmed. *It means although I am your familiar as per the ritual you conducted... no, you know something? It doesn't matter right now. We'll get to know each other well enough in time. I did not come out here to speak about myself.*

*Because you clearly need my help, Master. This floundering you are doing... it is unbecoming. You are overthinking a simple matter. You saw yourself as confident tonight, but now you seem to be acting as you learned nothing.*

*Answer me this. Do you find the female known as Ishmael attractive? Physically or by personality?*

Metis nodded. *Are you curious about a physical encounter with her?*

Karolina took in a deep breath and slowly nodded. *It's definitely intriguing, I'll admit... I'm not sure how-*

Metis raised a foreleg and waggled it disapprovingly. *Ignore your self doubts. Twice now, you have said yes in regards to your interest. I am assuming you are physically capable and not asexual, so why are you contemplating the universe here?*

Karolina fidgeted with her witch hat in her hand. *I don't know... just nervous, I guess. It's been a long time, Metis. Like, a really long time. I haven't even thought about stuff like this much, especially as of late. Are you saying I should hook up with Ishmael?*

Her familiar looked deep into Karolina's eyes. *Not everyone gets someone who appeals to them on a primal level... to ask them something like this. If you cannot take the opportunities that present themselves and play it safe all the time, I do not know what to tell you about how you wish to lead your life, other than it will be dull and you'll spend your last moments with regrets. Maybe nothing of worth comes from this, but who cares? If it doesn't work out, leave her room. But you won't know if you don't try. You are a woman and a witch. If you live your life without any passion, you won't reach any heights and you'll find life becomes a mediocre existence, instead of something that you had the chance to lead.*

*The journey we are on is likely to be long and riddled with danger, Master. The chances that any of us could be killed in the next few days escalates dramatically when we leave the home of the Mimi. Uluru will not come to us. This is a rare peaceful interlude. My advice is to make it a good one, Master.*

Karolina blinked, not expecting to hear any social wisdom like this from her familiar of all people. The spiderling tilted her head, appraising Karolina, and then returned to her room without another word. She was hard to read and clearly more nuanced than the witch thought of her. What the deal with Metis was something to worry about at another time, however.

Reflecting on what she heard, Karolina felt the hard stone beneath her feet, both dry and yet dotted with drops of water. She then turned around, and pattered towards Ishmael's door. She placed a hand upon it, but didn't immediately push it in to open it, instead resting her forehead against the stone for a moment of quiet reflection to reinforce her self esteem.

After a few seconds, she stood up straighter, adjusted her Bali inspired attire, and entered the spider woman's chamber.

Everyone needs to take full advantage of whatever R&R is available. It's all part of an expanded sense of "Charity begins at home", meaning that self-care is vital.