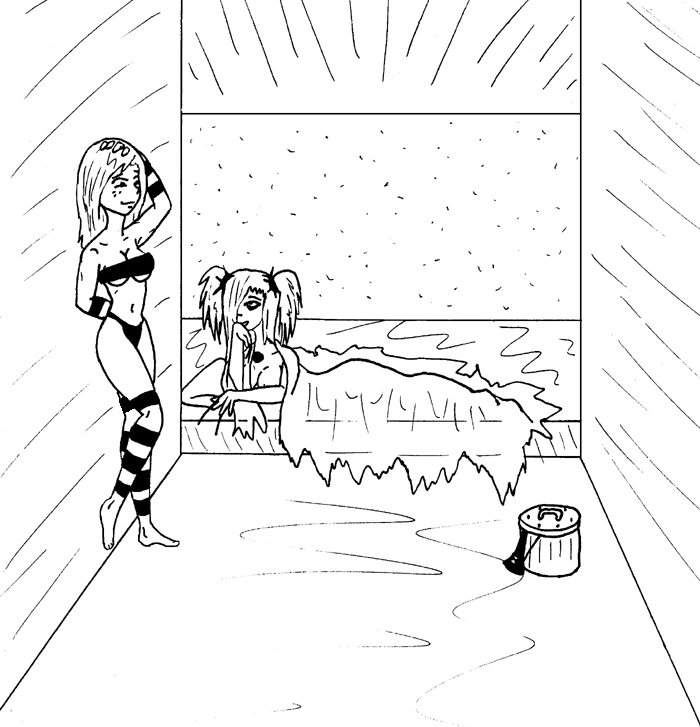 As I entered Ishmael's room, I found a small but cozy little place. It wasn't a particularly big place, as it was basically summed up with inwardly slanted walls towards a wider sleeping cubby in the back. There wasn't much of anything else in there beyond a small bamboo bucket-style container for holding one's possessions, as I noticed a portion of her fuzzy black bra sticking out of it. Huh. I thought all the rooms were built standard? I only glimpsed at mine earlier, but it was more rectangular than this one.

Ishmael was laying down in the cubby, resting her chin on her forearms, with a simple sheet draped over her body. When I walked in, she seemed a bit surprised.

"Oh! Karolina!" she exclaimed, leaning up slightly. "I'll be honest, I didn't expect you to show. I thought you decided to call it a night and all."

I leaned against one of the slanted walls, trying to remain cool about all of this. Smiling awkwardly, I nodded sheepishly. "I wasn't sure I was going to either. Am I too late? Looks like you were about done yourself." I welcomed any small talk she would share with me at the moment. I felt like I was dipping my toes into cold water before I could get used to the temperate.

"No, no... you're not too late. Again, I thought you had decided against a visit to my room tonight. It's been a few since we talked and it was quiet outside the door, so I just assumed you went to bed. Hm. Do you mind if I ask what changed your mind?" she inquired with a cat-like expression of amusement.

I chuckled. "Believe it or not, it was my familiar, Metis... she's a bit more insightful and persuasive than I realized."

"Metis, huh?" Ishmael smirked. "The frowny little spiderling, right? I see. How long have you two been working together? I'm guessing she doesn't usually talk about such things with you?"

"She's actually very recent to our little team, to be honest. Really, I summoned her not long before we met. And no, we really haven't spoken much. It's, uh, more complicated that I realized."

"You know..." Ishmael began slyly. "They say a familiar is an extension of yourself in some ways. Do you think it's a coincidence she turned out to be a spider as opposed to something else like a cat? Or that funny little hand guy that pops up?"

I recalled what Metis had just told me. I didn't make her, so much as I summoned her. But that was something for another day. "I couldn't really say why she appeared. I mean... maybe it had something to do with being around Bali-la? I've not had any particular bond with spiders or anything else back in the day."

I blushed. My admiration for Bali-la. Summoning Metis. And now spending time with Ishmael? Well... "Yeeeah... maybe there's some kind of running thread going on." I blushed again. "I don't know what else I can really say about it."

"Fair enough. Although I would suggest you're learning what you like, perhaps?" Ishmael teased. "Got some Death Clan fever, hm?"

"Hey hon, it's nothing to be ashamed of. Everyone likes something and doesn't like something else. It's not a crime, you know. I, for one, like guys and gals in stripes. Couldn't help but notice you have some there."

I looked at my arms and legs. I didn't even have to concentrate on them at this point to get those black bands. And after Bali-la, I rather enjoyed the look myself. It's not like I had any fashion sense beyond 'rustic looking farm waif'. "I'm partial to them as well. But I like your, ah, circle too?"

She glanced down to the black sphere mark on her chest. "Thank you," she smiled wistfully. "I barely notice it now. But it reminds me of home sometimes."

We looked at each other quietly for a moment, smiling. There was a little tension in the air, or so I felt. I was running out of things to talk about on short notice.

"Ah, if you don't mind me saying, I'm a little surprised you're resting on that slab. I would have figured that you'd have something, uh, else set up. Because you're a weaver?" Gods, I was bad at this.

She perked up that one uncovered eye, bemused. "You mean, that I'd have a web or hammock set up? Well, yes, I certainly could have. Also, I think you were referring to my caste title? It's 'Trapper', although a weaver wouldn't be inaccurate."

"No worries, Karolina. "But yes, I'm sure it would've been more comfortable than this. There's just a sheet over the stone here and one on my back- a web would definitely be better. But like I said, I wasn't sure if you were coming over and I was pretty tired. We Xibalbans are no strangers to sleeping on stone, I assure you. This was just me being lazy, I guess. Ha ha. But you know... it also helps to keep one's options open, just in case."

"Yes, Kara. The kind of options that arise when a cute and clearly nervous witch comes a knocking on my door in the middle of the night. And I'm specifically talking about the kind of witch that isn't sure how she should approach things or how far to take them, so there's a lot of small talk that proceeds her interest there? Does that sound about right, you think?"

All I could do was nervously squirm against the wall and chuckle. "Oh geez. Is it that obvious?" She read me like a damn book. Her confidence was staggering.

Resting the side of her mouth on her hand as a support, she looked at me kindly, even if she saw right through me. "Maaaaybe a little. But that's not a problem. I think I have some idea of how you might feel here. There's no need to worry, hon. Still, if your cheeks keep getting red like that from blushing, I'm going to start thinking you're about to go feral here."

I was feeling hot under the collar at this point. At the very least, if there was no tension in the air between us, it was definitely within me. "S-so, what would you like to do now?" I stammered. I couldn't think straight at all at this point. I was so out of my element.

"Well..." she started, pondering things as she looked me up and down. "Why don't we keep it real simple for now. You look like you're about to explode from stress. So, maybe you'd like to come into this little cubby? There's some nice little corners in here. We can just sit, you know? And just hold hands. Like I said, real simple, no boundary pushing. We won't do anything you're not comfortable with, alright?"

My legs felt numb with anxiety and my body shivered. This.. was really happening. I couldn't believe it.

"Sounds... good..." I choked out, my voice barely reaching past my throat. I nodded, as she beckoned me to join her and slid in the adjacent edge of the cubby corner, awaiting me. On rigid knees, I ducked inside and followed. I don't think I was even remotely this nervous even when we fought the Karahydra the other day. Somehow, it was easier to deal with a giant monster like that, than work up my courage on this new frontier.