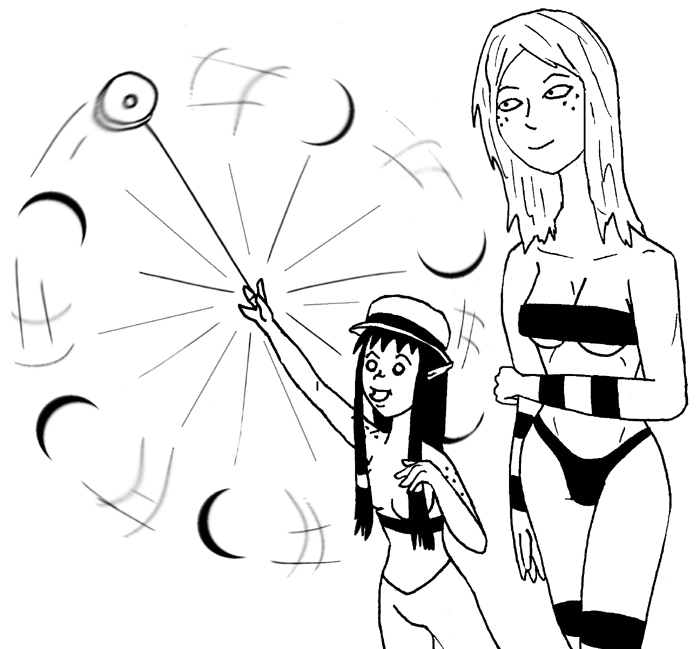 I ventured down the connecting hallway where Tulsan went, but he was long gone by this point. Rottkap, however, was not hard to find at all. I found her at the edge of my sight in the corridor playing with... something? She sounded pretty happy, laughing to herself every so often.

She looked back to me gleefully. "Great! I had a little meeting with some of the Mimi earlier. They're really nice people. Oh, that reminds me. You're supposed to see them too..."

"Oh, I know. I saw Tulsan a few minutes ago and he clued me in. Metis is on her way. So, what was it about, if you don't mind me asking?"

"Nothing too serious, really," she chimed. "Just asking about my background with Zanza-Anzulu and hanging out with you guys. They were pretty amazed the mushroom queen let me become a regular fairy and such. They also thanked me for translating for them- it's true, their language hasn't changed in forever. It actually does precede the Law of Shadows stuff."

"That's pretty neat. I remember it sounded just like burbling noises to me- I didn't hear any obvious patterns that would have sounded like words, though. So, does that mean you can do the same thing? I didn't quite understand how you knew what they were saying."

She tapped her chin, pondering. "How to explain... not to sound conceited or anything, but it's kind of a fae thing, I guess? I don't actually understand much of what they're saying, but I understand what they're communicating, if that makes sense? Most fae these days, as I understand it, just speak whatever everyone else does through the Law of Shadows. But we apparently have our language and I would best describe it as 'empathic'. Much like how the Law of Shadows translates what you and I and most whoever else speaks to each other- it seems we fae just sort of know whatever the other is communicating, so long as we are."

She continued. "Fairies, see, we don't all get born like you do- we're like intangible spirits until we infuse a new body. Some of us, sure, do get born like humans and Xibalbans do, if one of the parents was a fae. But others? Heck, I've heard of fae being born from flowers and trees, and only then do they assume the form of something like myself or whatever. The point is, we share an awakened common ground before we become physical and from that, we just seem to understand each other from that level. I mean, that's my take on it, anyway. I'm no scholar in this stuff."

I blinked. "Really?" How crazy! I had a brief moment of wondering if Bali would have understood the Mimi tongue and for that matter- were her parents other Xibalban/Fae in origin or was she born from a tree like some acorn? It felt like there was always something about this world that I didn't know, let alone had any idea that was I unaware of it. All I could do is try to listen and process it for what it was.

"Oh! But never mind all that," Rottkap announced excitedly. "Look at what the Mimi gave me! I got a weapon, Kara! With some practice, I can help out, just like you and Tulsan!"

"Hm?" I looked down in her hand. It seemed wooden and was shaped like two large cookies put together on the flat sides. Then I noticed a string connecting to her mid finger and I stifled a chuckle. "Oh, uh... what's that?" It couldn't be...

"Have you ever seen anything so cool?!" She was really fascinated with her new possession. "I've never heard of such a thing, but it's called a yo-yo! Look at it. LOOK AT IT!!!"

"Yeah, it's very cool, no doubt..." I was trying my best not to laugh. They gave her a yo-yo? What? Even in my isolation in Adelaide, I knew what it was, and I've never heard of it being a weapon. It made sense that a former mushroom queen envoy wouldn't have much knowledge of it, but still... a weapon? What did they tell her, I wonder?

"This is a lot more fun than Mr Tulsan's javelins. They showed me I could do tricks with it. Like this!" She unfurled the knobby toy with the connected string and spun it about. "This is called 'Around the World'! Vroom, woosh-woosh-woosh! Ha ha ha!"

Well, I had to admit, I wouldn't want to be hit in the head or face with that thing. It probably would hurt, but I couldn't see it working on something like the hydra we faced. Still... I wonder if the Mimi gave it to her to let her feel more secure in a bad time? She was small and while quite a dancer, not visibly muscular. I don't think she'd ever really been in a fight either, at least beyond running. I could see her wanting to feel like she wasn't a liability- I knew that she had some concern like that in her previous mushroom-like body. Maybe she talked to the Mimi about a few more things than what she mentioned to me?

In the end, I decided not to question it. She was my friend and I wanted to be supportive, even if I didn't fully understand it. There could have been more to their motives than my guesses anyway- Xibalba was full of surprises like that. And considering what they helped Tulsan with as well as Rottkap's total approval of them, I didn't think the Mimi were messing with us. Maybe with some practice, such a thing could be useful after all? And the knob of the yo-yo itself was fairly large, bigger than any toy version I've ever seen.

"Anyway!" she said, awkwardly catching it. "I'm going to practice with it for a bit. It's pretty tricky to spin around. I'm still trying to do this 'reel it back' thing they showed me. Just a flick of the wrist, and it's supposed to go into my hand again. But they said it was sometimes used as a hunting weapon waaay back in the day, so who knows. Maybe if I get used to it, I can pull off some neat tricks with it, like they showed me."

"That sounds good to me. Just be careful with it! Those things can be kinda chaotic when they get out of control," I said. I think I used once when I was younger and gave myself a bruise on the forehead. "Congrats all the same."

"Thanks! I'm going to work at it for a bit. And if you're ready to see the Mimi, they're in a room all the way at the end of the hall on the right."

By now, I felt Metis approaching from behind, who glanced curiously at Rottkap's new 'weapon'. *Ah... if you're ready, Master?*

*By all means. Let's see where this goes next.*