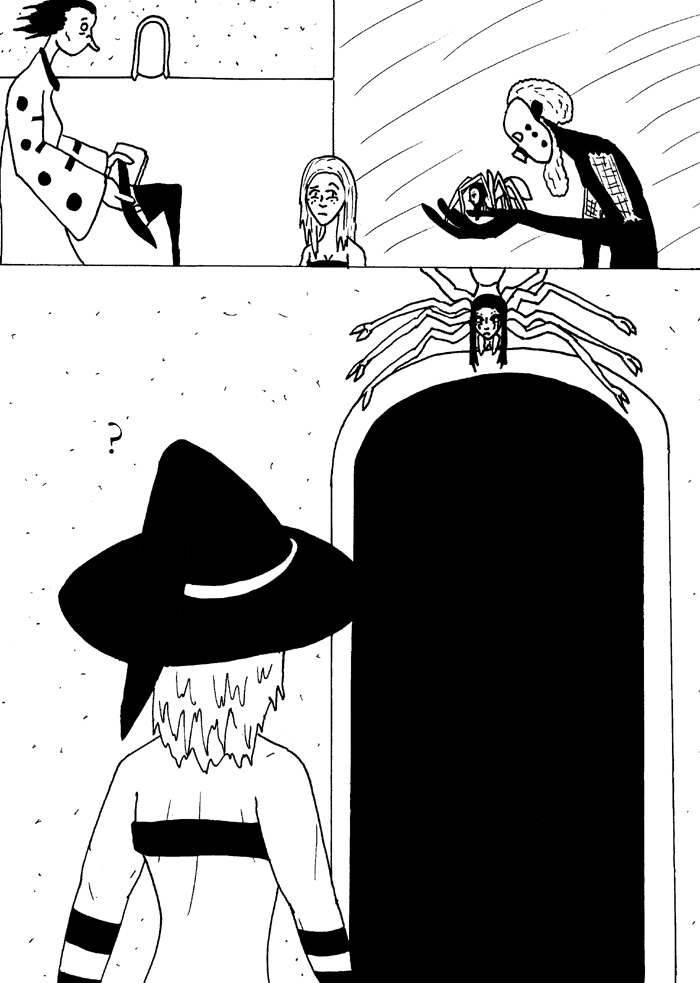 At the end of the hall, I felt that strange darkness suddenly. It was the one from yesterday when we entered the cave that no one else seemed to notice or openly acknowledge. It was maybe a little different, perhaps somewhat less oppressive, but it was there. I felt as though I walked into an invisible cloud, filled with pressure and the threat of existential malice. I slowed my pace, finding two Mimi standing at the bend of the pass; one male, one female.

"Hello. You wanted to see me?" I was under the impression they understood us, thanks to the Law of Shadows, but their tongue wasn't covered by that. Still... I realized I should have asked Rottkap to come along to translate. And that was rather odd, as I thought about it. Wouldn't she have known I couldn't understand them? She knew they were interested in some meeting with me- she told me so, along with Tulsan. Ah well. I guess she really got caught up with her yo-yo and it was my bad for not thinking to ask her sooner. Maybe the Mimi and I could still get some understanding across.

So, imagine my surprise when one of the Mimi picked up Metis in his spindly hand, while the other held my book and hat to take. Weren't those back in the room? And why did Metis seem so comfortable with being picked up like that?

*Master, I will be conducting your business here today. You have... matters to attend. Things that should not wait.*

I tilted my head, studying my familiar, confused. *You? I thought the Mimi were doing whatever was going to happen.* This approach seemed odd.

*They sought my assistance last night, actually,* Metis stated. *While you were dancing and then canoodling with Ishmael, I made preparations. Rottkap assisted us with communication earlier, but was bade to keep quiet about things. The Mimi are genuine in their interest to teach others. It's almost painful in how altruistic it is. That said, they sought insight about you. They have nothing against you, but they sensed an uncomfortable darkness within you that gave them some pause.*

*What are you talking about?* I asked. I felt a little uncomfortable about all this happening without my notice. Not betrayed, just... I don't know the word.

*More or less, Master, what you know in regards to your earlier life, I know. Please do not make me recite the history that Bali told of you. Or that of Adelaide. I am aware of these things and so are you. Regardless, it was in our collective interest to help them, help you.*

I stared at Metis, frowning somewhat. I had an idea of what she was talking about, if loosely. They were uncomfortable with my witchcraft background, it sounded like. And the shadow essence that fuels it. *Fine. Where is this going?* I sighed.

*In the adjacent room, there is a rounded mirror structure that the Mimi possess. Through our discussions, we have been granted access to use it. It is a special device of sorts- worry no further of it, however. You are to take your things, enter the chamber and look upon the mirror. Then? Wait.*

Sounded a bit ritualistic. *What happens at that point?*

*Your past, your present, and your future.* Metis replied ominously. *All things will be decided. Steel yourself and go in. I cannot promise you anything further than the truth will come to you.* She observed me sternly, with her usual unfriendly gaze. *And that truth will make or break you. I will be there, but this is something that truly only pertains to you and you alone.*

*Metis? You're making this sound dangerous. I thought this was going to be some kind of discussion or a lesson?*

She ignored me, hopped off the Mimi's hand, and entered the room, soon crawling up the wall at the far end. There, she awaited me atop the mirror's gold frame. I donned my hat and looked uneasily at my spell book. Something really felt off about all of this... The two Mimi patted me on the shoulder and burbled something incomprehensible, but it sounded supportive. From there, I entered the room and walked to the mirror and Metis alike. It was unpleasantly quiet, echoing the patter of my bare feet against the stone.

The room was un-decorated and square, if sizable. Barren of any other features, I felt as though I had walked into an unfinished tomb. As I approached, the mirror's reflection began to dim. And as I drew close, it turned to a tar-like black, casting nothing back.

I remained looking at it, waiting as I had been told. I thought Metis was looking at me, but no, she too looked into the blackened mirror. *Gaze deep, Master...*

For all her statements calling me Master and her overall cold personality, I felt little trust in her as I stood there. Tom wasn't even my familiar, and we got along far better.

Then I felt it. The darkness from earlier had gone full blast to my senses. As I gazed into the non-reflective inky darkness, I realized that the intensity wasn't necessarily just all around, as if a thing waiting in the gloom.

Like a fire creating smoke, it was coming from me.

I felt myself dragged into the sheer blackness I observed, pulled in by my own weight and gravity to some unknown end, with only Metis to accompany me into the void.

Descent is invariably fraught with physical or psychic peril, or it's of no use.