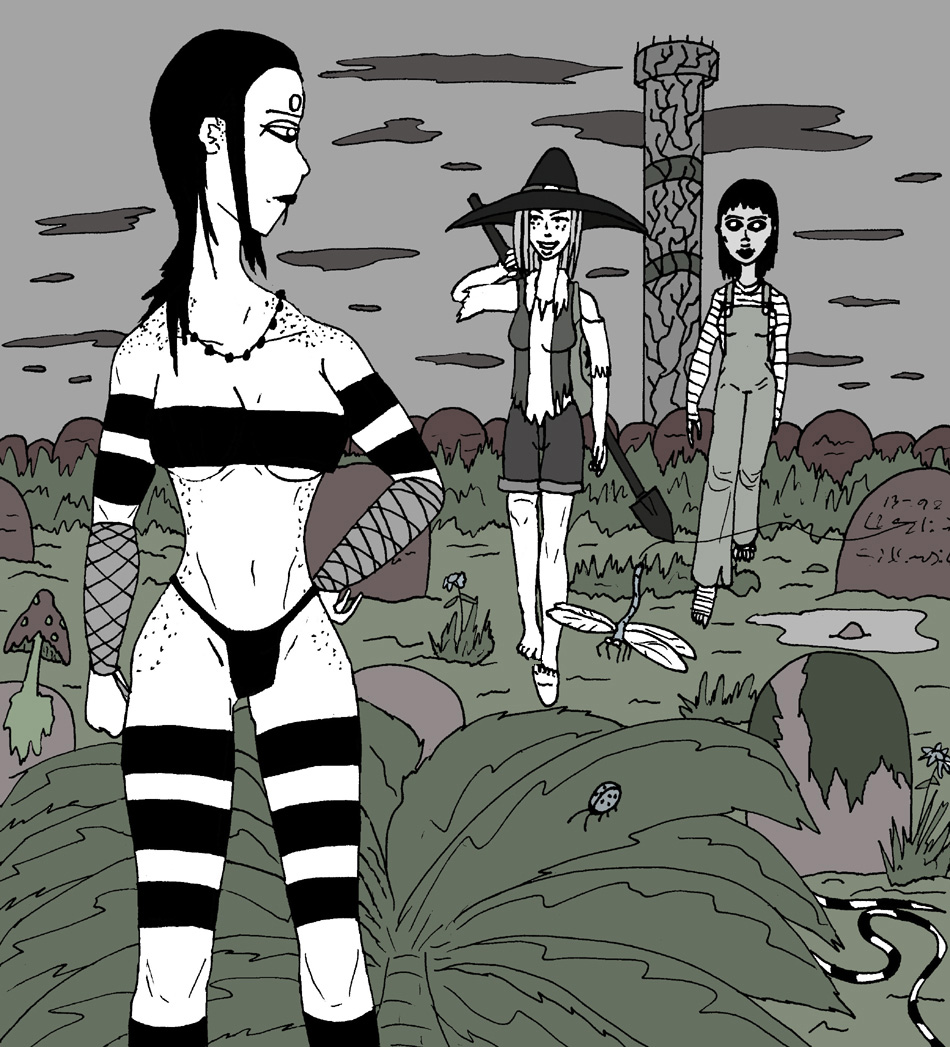 Karolina searched Bali for a response, but the Xibalban seemed to be in no hurry to delegate an answer. If anything, her focus had returned to scrubbing the zombie, who as usual, seemed relatively oblivious as to what was being discussed. The shovel witch pursed her lips, hoping for some kind of acknowledgement or opinion. Bali did not make it quick.

"It's dangerous out there, Kara. You've made it rather clear to me that you're not well versed in life beyond Adelaide. Suppose I take you along," she spoke calmly. "The chances of you dying outside this place are significant. There is no shortage of animals, monsters, and all manner of mundane issues that will precipitate an early end for you."

Karolina nodded, the truth of that statement being bittersweet, but hardly unknown to her. "I know that. But there's nothing for me here, either. This is an existence, not a life. It's dull, predictable, and..." Her face winced, catching her words. "Unsatisfying."

"You are one of the few interesting things that has ever happened to me. A random variable to my day to day life of burying an entire village of misplaced bones. Bali, realistically speaking, I don't think I could ever complete this. I don't know which humerus goes to what forearm. Not after years when I've dug hundreds of graves for those who died intact, versus several hundred who are still scattered all over the landscape. In some ways, yes, I bury the dead out of respect, as I was raised. But in many more ways, I do it out of habit and a need for purpose."

"Resurrecting Siouxsie only confirms that what I wanted is not within my grasp. I can't fix this town. But... maybe I could change my situation. Isn't that along the lines of what you said? Maybe I want to make things right for myself. Live while I'm still alive..."

Bali slowed her at task again, her eyes strangely distant and fixed.

"Hm? Oh, sorry... something you said took me elsewhere for a moment."

The two stood awkwardly. Bali licked her lips and raised her head, thoughtfully looking at Karolina. "What about her?" she inquired in regards to Siouxsie.

"She would have to come with me. Come with us," Karolina announced. "I know it's imposing. But I can't ignore my responsibilities anymore, just because I'm not good with them. I see that now. She and I are a package deal."

Bali allowed a small smirk. "Well, good. Because if you said otherwise..."

Karolina brightened. "Wait, does that mean you'll have me along?"

Sighing in resignation, but appearing no less willing, Bali nodded slightly. "Yes. You can come with me. But there's going to be some conditions and understandings."

"I'll give you one hour to prepare. Take anything that you must have with you, but pack as light as you can. The country outside this town is a gigantic swamp. Don't bring shoes, they're rarely practical. And dress lightly. There's no fresh water well waiting for us out there and the water, however abundant, is not always safe or drinkable. The heat in Adelaide is nothing compared to the wilderness."

"Alright, I can do that. I have a satchel that should work. Maybe I'll bring a change of clothes and a canteen or two," said the witch, organizing her thoughts aloud.

"Secondly... and this is important. You might not understand it, but my kind like having a clear sense of who is in charge when it comes to being in a group. I am your friend, but I'm also going to be the 'Alpha' of our group. I have experience when it comes to being in the wilderness and dealing with others. I will be fair with you, but there may be times I will need you to listen and follow through without arguing about it. And those requests may even be strange or unusual. I need to know that you're fine with that."

"Her circumstances are special. She'll be both of our responsibility. I, as an Alpha, must watch over those in my pack. And as for you, you'll be my 'Second'; so you'll need to watch over her closely. She's not in a position of self determination right now."

"Huh. Alright, I guess that's fair. All that I know about the outside world comes from stories. I suppose it makes sense to follow someone with experience."

Bali chuckled. "You'll find I'm far less than perfect, but I thank you for the note of confidence. And I don't mean to be pushy either. It's, eh, just a Xibalban concept. We're very specific about who is in charge and matters of ranking. Oh, and there's a third note I'd like to bring up while I'm at this."

"Take whatever you need for your magickal studies. I think that's something we should develop while we're out there. I'm going to be teaching you along the way... about the world, nature, history, perhaps even myself... but you would find it useful to understand your craft out there. Mages and witches are uncommon, but they're often respected and practical when they're around. 'If you have an edge in life, sharpen it', as they say."

Karolina nodded reluctantly. She was still feeling quite gun shy about playing with magic at the moment, but she knew a bit of studying couldn't hurt. It seemed that Bali-la wanted her to experience self improvement, she reasoned. Or perhaps make a unique asset of herself.

"We'll talk more about magick down the line," Bali said. "I have questions for you. Much as I'm certain you might about me."

"Very good. One hour then. Gather your items and make your peace with Adelaide... we might not be coming back for some time. I will be waiting on the outskirts of town where we first met."

The witch nodded happily, inspired by the idea of taking a journey and leaving this ruined town. The zombie's bath time, meanwhile, had ended. Siouxsie was swaddled in a towel and walked upstairs to get dressed. The zombie seemed without concern and possibly not even aware they were going on a trip together. Likely, she would not have even cared if they did.

Bali-la watched them go and then stretched in a cat-like fashion with a sigh, wiping the cauldron's water from her hands. Things were moving quickly. It was a welcome change from how it had been for a painfully long period of time. And perhaps it was characteristically reckless to bring the inexperienced girl along, but Bali was sure that one way or other, the Australian human would be useful. It was merely a question of how and when.

Before long, Karolina appeared at the town's edge with Siouxsie. The witch carried the satchel she mentioned under her arm and her shovel in the other. It seemed an impractical implement to tote along, but Bali held her tongue, believing there might have been some significance to the object. Beyond that, Karolina was still wearing her shorts from earlier, but with the white shirt and ragged vest from yesterday, as well as a witch's hat. Bali raised a brow. "Is that dressing light enough?" she inquired.

"Well... I find them comfortable. White reflects the sun and the shoulders are open for breathability. The shorts aren't too long. The hat helps me focus my magick. And the vest is sentimental. It's not that heavy, really. Heh. Sorry, I'm just not ready to go around with my butt showing out of my underwear, little miss-panty-floss," she said with a chuckle.

Bali shrugged with a grin. "Fair enough. So, what's going on with Siouxsie...?"

The zombie was even more covered. She was wearing raggedy denim overalls and her body was otherwise completely covered (save for the face and digits) with bandages.

"Yeah, about that... she saw herself in a mirror when I was getting dressed and she said, "Sick" to me. From then, she insisted on covering up. She found some bandages and started putting them on herself."

"Interesting... okay, but what about the overalls?"

"Those used to be my father's. I told her about the heat, but she didn't seem to understand or care. And she kept trying to dress herself, but she didn't seem to understand that part somehow. She was running around up there with pants on her head! She even thought it was a game when I tried to remove them and show her how to wear them... eh, the overalls are a compromise. I didn't want us to be late and she didn't make a fuss with these."

"No. But I am willing. Let's go! I can't wait to explore what's outside of town."

Bali-la smiled and the three took one last look at Adelaide, with no certain plan of when they might return.

"Bye bye home," uttered the zombie, crudely waving her bony hand. The witch and Xibalban exchanged a quick look, and together, they entered the vast shadowy vegetation filled swamp, a strange child of Australia and Louisiana's union together.