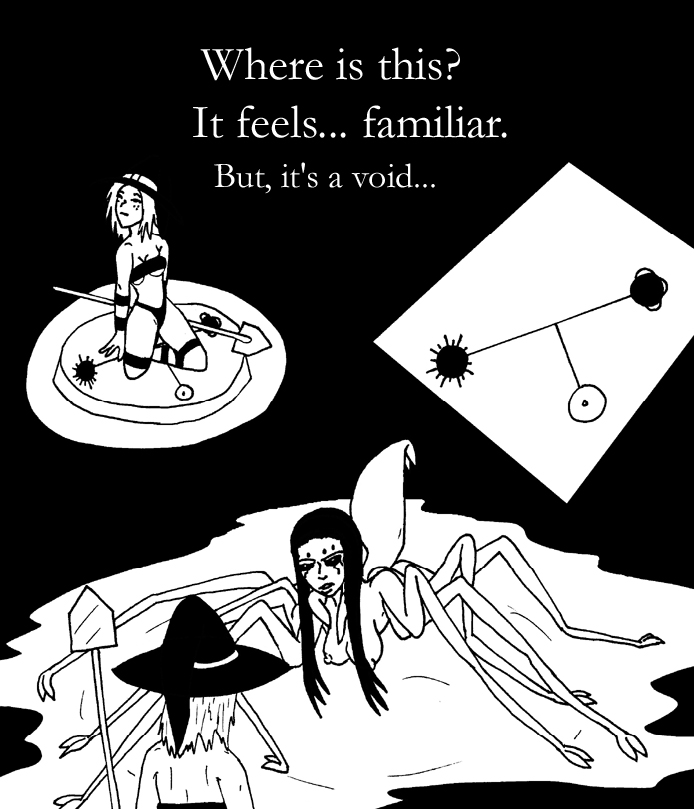 I awoke in a place of utter darkness. Even with the gift Rottkap had bestowed upon me, there was nothing to see. No... it was more than that. There was nothing here. It was a void. Yet, for all it's emptiness, there was a sense of familiarity to it. I couldn't explain why.

I had landed in some bell-like vessel upon whatever constituted the floor. That same bell left the platform I stood on between me and said floor, while the bell itself retreated into the shadow above, beyond my ability to detect. I could see myself and the platform, but little else still. And upon that platform was a strange pattern. It consisted of three circular shapes extending from lines, upon which I stood upon the vertice. From my smattering of understanding from my spellbook, I knew this to be some kind of sigil, but I didn't recognize the signs outright. One looked like an eye. The second shape resembled... an abstract flower with petals, maybe? And the third looked like the spiked head of a mace, not terribly dissimilar from Beltresz' weapon.

After a moment, I realized I wasn't alone in this place. Emerging from an ebony fog stood a giant version of Metis. She looked exactly as herself, but stood wider and taller than myself. My first impression was to doubt it was her, but I felt a the connection of my familiar, however oddly faint.

She just stared at me, sullen as ever.

"What's going on? Where am I?" I asked. I knew she had some understanding of the events here, if what she mentioned earlier was accurate. Hopefully this was true, because I had no idea what in the world was going on.

She looked at me, bleak and humorless. "Even if I explained it, you might not understand."

"Try me," I said with a shrug. Her doubting tone didn't particularly shake me. Metis was Metis.

What? "No? Why not?" Outright refusal or defiance wasn't something she demonstrated before.

"Because it's not important right now. And the answer may come to you later, however non-linear it may be."

I crossed my arms and just studied her for a moment. "Then tell me this... why are you suddenly so large now?"

She seemed to take note of herself and then gazed back to me. "This is how I stood at my greatest strength. You have only seen me as a flickering imitation of who I was- who I am."

I took a deep breath and just stared back at those confrontational eyes of hers. I had enough of this. It was time to make sense of what was going on with her and I, because it never really felt right to me. If a familiar was supposed to be the right hand companion of the witch, then why was she at arm's length, so to speak? All the time. Distant. Unfriendly. Cold. She had made allusions to something being unconventional about our relationship.

"Metis... I think it's time you told me just who or what you are. And I mean that as literally as possible, as well as why you're with me. Don't think I haven't noticed the tension between us."

She looked threatening, but not specifically at me, so much as a tiger looks intimidating by simply existing. If anything, her demeanor was unchanged as ever.

"Very well. It is time for that," she said. "You summoned me through Tom's ritual, this is true. And I was promised to you, through Lord Chernobog, the one who bestows the spells you learn and ignore. And yet... I am NOT promised to you whatsoever. It is very unusual... this situation we find ourselves in. I both am and am not your familiar."

I considered what she meant. I had theories, but I wasn't certain of anything. "Go on."

"I existed in the past, before the return of the Xibalbans... in the Age of Men. I was part of no code, creed, or order. I hunted mankind in secret. Burrowed into their homes while they slept. Did as I pleased and typically devoured them. I have killed MANY humans. Few survived to tell any story of me to their descendants. For all my malice, I was eternally and deliciously unknown."

"I am... rather, was a plague upon mankind. A monster that followed his rise from a dull witted ape who learned tools of flint, to a hapless smart mouthed buffoon. I hunted. I killed. I took. That was my way. The how's and why's of this are not important right now. Know only that I did."

"But, even ageless beasts such as myself might still die. And die, I did. I did not withstand the carnage that was the Herald Event."

"However, like your zombie, I am a spirit given flesh. Stripped of it, I remained still. I wandered immaterial and lost for ages. At least, until an offer was given to me and a pact made. I would be recreated, if to serve as a familiar for the right person. Someone who's path would align with my own. I am more advanced than one like Tom, because I am possessed of myself and of my Master. Tom is merely a figment of Brand, and nothing more."

"Two higher spirits were involved in this, both far greater than anything I had ever been. To wander the land impotently was intolerable. I had to be more. Yet, as a familiar, I operate under limitations and the control of my Master. Such is the price."

There was a lot being said here. Hearing her talk so nonchalantly about killing humans like some immortal curse left me very uneasy. Everything had been so 'matter of fact' and historical. And yet, I didn't understand my role in all of this, let alone what she had meant in regards to our bond.

"I chafe... working for you, Karolina Bailey," she stated with express disappointment. "You're inept at magick by your own lack of ambition and self confidence. You even needed basic encouragement to attend to Nemesis. And worse? For all you seemed to have learned, fate has rendered you ignorant of why you have found yourself in the situation that you are in. Your world revolves entirely around the memory of Bali-la. You even wear her attire and mimic her stripes. In short, you are barely your own person."

I blinked and felt disgusted. "Well, fuck you too, Metis. You want me to try unsummoning you? Because clearly neither of us likes what's going on here. I don't need your judgement or your attitude, frankly."

"I'm not done," she hissed. We glared at each other.

"The problem with you is exactly as I have spoken it. Fate has rendered you utterly unaware. You knew nothing outside of Adelaide beyond the paranoia of your parents and townsfolk. Only with Bali and the others did you learn of how to even function on your own. Yet? There are things your friends cannot help you with. And chagrined though I may be, you are still the acting Master here."

"Can you speak plainly for once?" I snapped at her.

"Then pay attention and cease your inane whining drivel," she retorted. "As I said, I have a purpose here, brought about by two spirits higher than myself. One is Chernobog. The other is a totem. Spider herself."

"Spider sensed you would identify with Bali. And perhaps Nemesis. Your perverse fascination of what happened in the sand cave was telling enough. You, like your ally Beltresz had done... will undergo apotheosis. Maybe you have not actively thought about it, but in your heart, you cannot lie. I, beyond any other, know the fault lines of your soul."

"You are gradually undergoing a subtle process that will erode your humanity. You will become a Xibalban. Of my conflicting purposes here, I am assure you see it through intact. Or as together as one such as you shall become."

I was speechless. When? How? Why? Was this for real?

"Because you are the blankest of slates, little shovel witch. And you crave an identity of your own," she said, answering a question I hadn't truly asked. "The compulsion is there. The fascination roils through you. You cannot escape who you are."

She leaned in ominously close. "After all... and although it's not related to what we spoke of... Adelaide happened, did it not?"