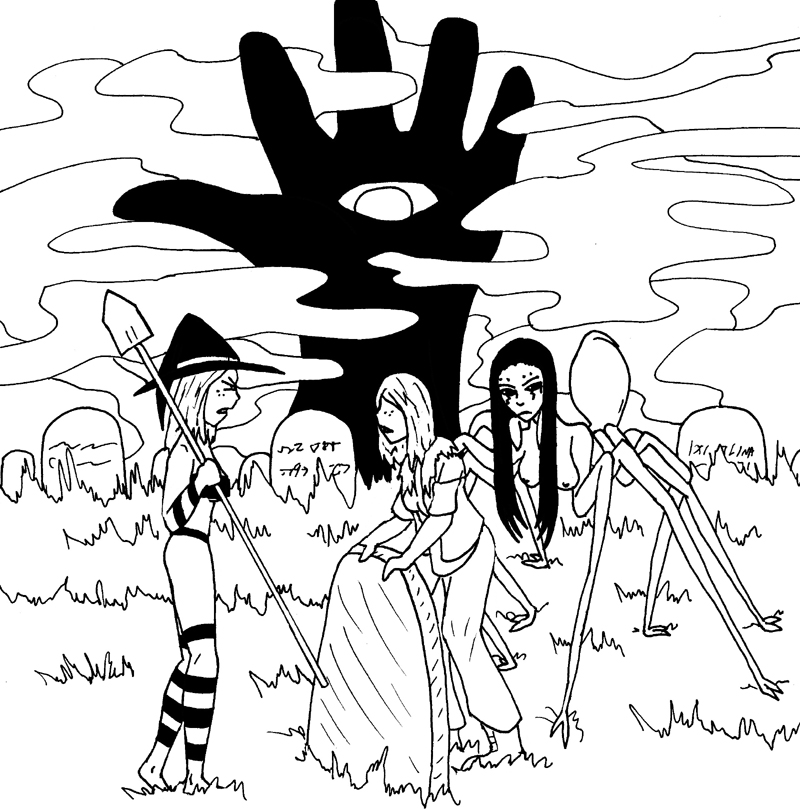 She emerged from behind the tombstone. I knew exactly who it was. From the bottom of my gut, I felt a wave of disgust and my darkness grew. I saw her every day and in every reflection upon a water surface. She was I, and I was her. But we were not the same.

I glanced to Metis, who somberly took her side, watching us both. For the moment, I couldn't read her. I understood all too well by what she meant. She was destined to be HER familiar. I just took over the role by how everything broke down. Metis operated only as my familiar in name, and not spirit. It made sense. Two murder machines were well suited together, conceptually.

She stood there, facing me. She was literally eyeless. But in every capacity, she looked like I did when I left Adelaide. Old hand-me-down clothes and all. Maybe I should have been weirded out by her face. But I didn't care. Not enough to be bothered, at least.

I scowled, as she leaned forward, seeming to study me. I... I hated her. I hated everything about her. This megalomaniacal bitch... the story Bali told me... the geists that walked the land... the way I was... I felt no common ground with her at all, despite sharing the exact same skin. We were different people. That was the absolute point of everything.

"So... you're what I became. I've been inside this whole time. Dormant. Lobotomized from my own body. Left to rot. And yet, to 'see' you consciously aware of me... it's very peculiar," she said.

I just glared. I really, really hated her.

"You took the spider woman's patterns, in a way. You've developed some minor magical prowess... if just barely. Not that I am one to speak... but I didn't need much else," she said quietly. "Eh. I can't say I'm entirely impressed. Bali gave me a second chance and you're what resulted." She shook her head. "You lack certain things I would have regarded as essential to living."

"Like what?" I hissed, clenching my shovel, while trying to keep it looking casual against my shoulder.

"Ambition. You have none. Anything that has ever gone on in your life... someone else enacted it upon you. You're like a pinwheel. You sit motionless and irrelevant until someone blows a bit of inspiration in your direction. Then you spin a little, before relapsing to a stop."

She tilted her head. "Adelaide would have been your tomb if Bali-la didn't come back. You would have stayed there and languished in mediocrity. Never practicing your magic. Just... existing. Almost mindlessly."

"That you have the nerve to say ANYTHING to me is a farce. I know enough of you at this point to feel nothing but revulsion for you. You betrayed everyone around you, especially those who were kind to you. All for the sake of a pittance worth of freedom, built on the bones of everyone else."

She stiffened up somewhat. "You're not wrong. Bali was right to do what she did. I was out of control by the end. Not even truly guiding with my own hand, thanks to whatever Outer Hell is. I guess that's the negative side to ambition. Still... I don't know of too many positive traits I could assign to your apathy."

Gnashing my teeth, I snarled at her. "My apathy? You mean, this broken life I was poured into? I have barely been able to do anything but live in your fucking shadow. I have no idea what memories are mine, a hint of yours, or something Bali-la put in there. And frankly, as much as she could've made me think whatever she wanted with hypnosis... I still trust you even less. I have questions about the past, but I would never accept your take on the matter."

She just stood silently. Was she angry? Resentful? Distant? I realized how hard it was to read her expression due to-

"You're wondering about the eyes, I imagine?" she suddenly said grimly. "It's not a real surprise. The eyes are the window to the soul, Karolina." She took in a deep breath. "There was a price to be paid for what I did. You got all the important stuff. I'm just barely a lingering spiritual fragment at this point. Really, you're the only one keeping me here, intentionally or otherwise."

She raised her head a little. "Bali-la comes from a clan of assassins. Make no mistake of that. You were born from my ashes, but I was reduced to exactly that. I don't... feel anger at Bali for what she did. I... messed up her life badly. I had power, but I was incredibly petty and childish with it. I know what you know now... that she was ancient by Xibalban standards, despite all appearances. By the end, she was just another regret of mine."

"You have questions about Adelaide, right? Yes, I know you won't believe me one way or another, but hear me out anyway. Regardless of..."

She paused suddenly, putting a hand to her brow. "If I had eyes, I would cry now. This really is a form of purgatory. Sorry. Let me try again."

"Regardless of what I was, and what you may or may not have done, Karolina..."

"Move on. As much as you can. You're not me for a reason. I understand you want to fix what I've done. Hey... if you can, go for it. You have my blessing, for what it's worth. I don't have any grand secret I can share with you... some things just can't go back to normal. I don't know how to send the geists away. You can't do what I did. Learn your magic, maybe. Chernobog might have something for you if you get serious for once. Not everyone gets to do that, you know."

By now, I became aware of the giant hand with an eye in the distance. It emerged from the mists to watch us. "That's him...?" I muttered.

I raised a brow. "Meaning what?" I asked.

"I guess you've figured it out... Metis was supposed to be my familiar, at least from Chernobog's blessing. But I never got around to summoning her, nor was I aware at the time. And I wouldn't have trusted her."

"Metis can't exist as she does. She's betwixt you and I, due to a quirk of how it all functions. It's a bad fit. So... you and I are going to have it out."

I squinted my eyes. "You're going to fight me? Because of Metis? Why do you even care?"

"Metis is just part of it," she sighed. "This situation that you and I are in is unnatural even by magic standards. There needs to be just one Karolina. You don't understand... Chernobog has his claws in us, so to speak. You've ignored his book of spells and much of his very existence... he's not some abstract thing. He's real. Even though I was mind wiped... the pact I made with Chernobog remained attached to our soul. That's why Ruukunda brought you the book back eventually- Chernobog made her. He wants you to follow the path that, well, I chose."

"Thanks, asshole. You're telling me to move and then drop this on me," I hissed.

She glowered. "There's no sense complaining about it. Like I said, some things can't go back to normal. You want to assert yourself? Start acting like your own person. You've been told how many times now to study your magic... that's all he wants. Your very existence as a witch, giving form to magic, helps sustain him. You know, for that matter... why haven't you ever seriously studied the book? You have talent... Siouxsie being around the way she is nothing short of impressive."

I sighed. "In the beginning... I didn't feel like it was me. It got in the way of burying everyone at Adelaide. Then later... it reminded me of you. I didn't want to become you."

"You won't." my original self chided. "Can you summon geists? Oh no, you can't. I never learned to do that fire thing you occasionally do with your arms. I never learned that beam spell that repels the geist either. Much as a familiar is an extension of yourself, your spells often are too."

I blinked. I did not know this. Or at least, Ruukunda didn't mention it. Maybe?

"Alright, so... you're doing this for Chernobog then?"

"Partially," she said, calmer. "The other part of me, however... thinks if you're going to be pathetic after being given MY second chance... there's no point in going on for either of us."

"You're going to kill me? In my own head space?" I asked derisively. "After all that talk?"

She shook her head. "Yes, you need to move on. That means going on without my presence. However, if I am able to take you down, you're proving my point. You won't irresponsibly take a bunch of people further into danger. Maybe Tulsan and Ishmael would go on, but the others? I'm not so sure."

"Besides, there's something else about you that even Bali didn't know about... and it's unique to you, not me. I think I can show you. And you can decide if you really want to keep going or not."

"I don't understand..." What was she talking about? Show me what?

"That's the story of your life, Karolina," she sneered, summoning an spade identical to mine in her hand. "Willing clarity is the freedom to tomorrow, my dear pale copy."

We looked at each other for a moment and then took several steps away from where we stood to have a face off. I could finally read her. She wasn't kidding.

This was to the death.

Metis awaited us by the tombstone, saying nothing, but watching intently, much like the giant hand in the background. I suspected Chernobog would claim the loser. And if she won, considering she was trapped inside me, we would both be gone. It's what she wanted, one way or another. A way to end this.

We stood in a grassy field, studying each other briefly. I didn't like the idea of killing another person... but her? Well...