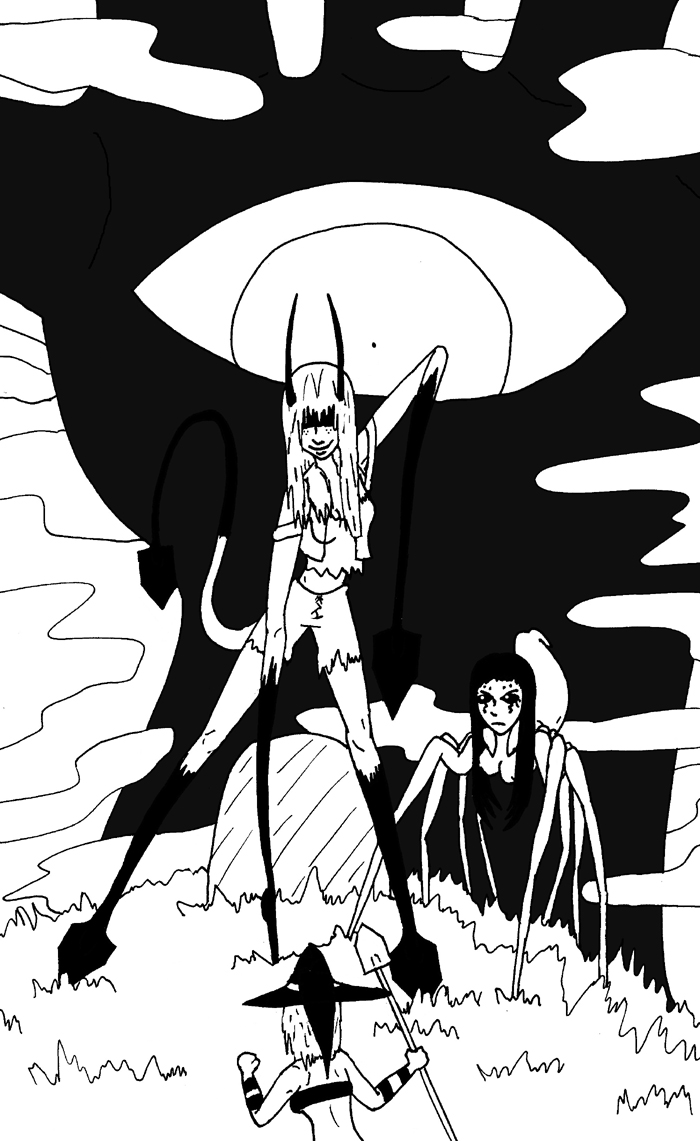 "By the way, Karolina... did you notice in this world how things such as humans and fairies tend to become something else? They feel a pull to something more than themselves. They apothesize, or whatever?"

"Funny thing, that. Humans, in particular... apparently we're considered 'a race of clay'. Sort of an intermediate point between one thing and another, depending on how you lean. People like your ally Tulsan, resist the compulsion, and want to keep their heritage and honor. Xibalba's innate madness doesn't call to him. But then, you have those like your friend Beltresz. And you saw what happened there."

"Where is this going, Kara?"

"Heh. So, it turns out really bad people with no soul, spirit, or anything to ground them... well, something happens to them too. I just didn't know until I, well, was like this."

She started rapidly twitching and spasming, cackling out of her mind suddenly. Her body began to warp and stretch violently, becoming twisted and unearthly. Her limbs stretched out, becoming sharpened like pointed shovel heads. Evil black horns sprouted from her skull. What once was a caricature of a human, was now just a mockery of what we were.

"tUrNs OuT wE bEcOmE tHe DeViLs... WhO bEtTeR tO dReAm Of AlL tHe BeSt WaYs To ToRmEnT aNd InFlIcT pAiN oN eAcH oThEr? In ReTrOsPeCt, It WaS sO oBvIoUs!"

"The heck is this? Gah... you miserable lunatic! Is this how you honor Bali's memory? What she did for us??"

"YoU aRe ThE oNe WhO mUsT rIsE tO tHe FuTuRe ShE gAvE uS. I aM tHe ChAiNs Of ThE pAsT. BrEaK tHeSe ShAcKlEs Or DiE, kArOlInA."

I was alone this time. We had gone beyond the point of reasoning. Further, there was no one to help and my magic was going to be all of completely useless against her. Metis stood behind her, watching uncomfortably. Her bond was more directly to this degenerate version of myself, but Kara seemed utterly disinterested in her. As a familiar, she probably couldn't take any direct action against either of us without an order, or so I assumed. She was a passenger here, in this doomed ship called my soul. If I died here, Kara would go into oblivion with me. And in turn, likely so would Metis. I guess I wasn't the only one who got a bad dealing of the cards.

My back was pressed to the corner and there was no way out, but through. So be it. No matter what happened to me, I had to win this somehow. If not for myself or my companions... then for Bali-la.

"I did not come this far to fail now. I know I've been meek, wishy washy, and problematic for a long time. I can come up with many more things about myself, none of which are impressive. But I can change. I HAVE CHANGED. And I'm just the shovel witch to bury you and everything that you're about! You want a piece of this, you insufferable bitch? Fine. I'll show you where you end and I begin!"

"Let's go!" I screamed at her, feeling deliriously angry!