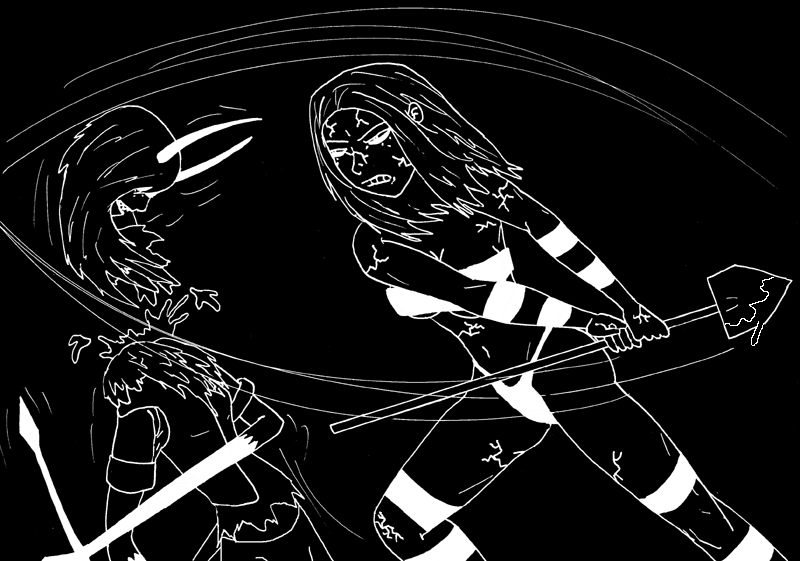 Choking up on the haft of her spade, like Alice in Wonderland slaying the Jabberwock, Karolina beheaded her earlier incarnation, clearing Devil Kara free of her neck with the sharpened edge of the shovel witch's wand.

As the head spun about in midair, spraying whatever ichor a mind centric creature would apparently have, Karolina could hear her earlier self spare a few sane words before she faded into the nothingness.

"Although I dwelled within your body and spirit, I was still not aware of how much you would, or could... assert yourself. You are clearly marked by the spider totem to be one of the Death Clan people. I expected a fight and you gave me an execution instead. It was so unlike you, but... I guess you were right. I didn't understand you entirely."

"It is only by the grace of Chernobog, that you may hold yourself together and pretend. Think of it- why else did I agree so long ago? Otherwise, you will forget. Things will become forgotten and hazy. Thoughts become impulses. Your native skin is breaking through, Karolina. Can you feel it? I'm glad I got to see it just once outside of my time here. But remember, with that, you cannot be the shovel witch. It's too difficult to maintain. And yet, both you and I... are not impressive humans, are we? It's so hard to maintain a balance. Know that in avoiding being like me, you might become the opposite. And you will lose everything still. So, I understand in that sense."

"Take what you can of yourself from this war within, Karolina. And go back out there, both knowledge, clarity and burden in hand. Fulfill your promise to the spider woman."

"But remember this one thing, above anything else."

"Think of what happened to Aunt Ruukunda's arms when she fixed our 'little issue' when we were born. And yet, you played god several times with a poor understanding of a spell and got Siouxsie as far along as she is. And yet, nothing happened to you for your spell misfiring. Yes Karolina... you and I... we ARE the curse. None of this was supposed to happen. It shouldn't have been able to. But here we are."

"Finally, I will say something entirely unselfish for once. As Bali-la bade of you, I also ask you to do something. When you get a chance, look within. Hard. You will see a memory there from the viewpoint of Chernobog within you. And you should know, Siouxsie paid the heaviest price of everyone you know to get you this far. She is one of many, but if you feel guilty about her state of being, you owe it to her and yourself to at least actively know the truth of that day."

"I feel the infinite emptiness calling me. It's been... swell. Remember, be better than I was. There's no Bali-la to give us another chance this time around."