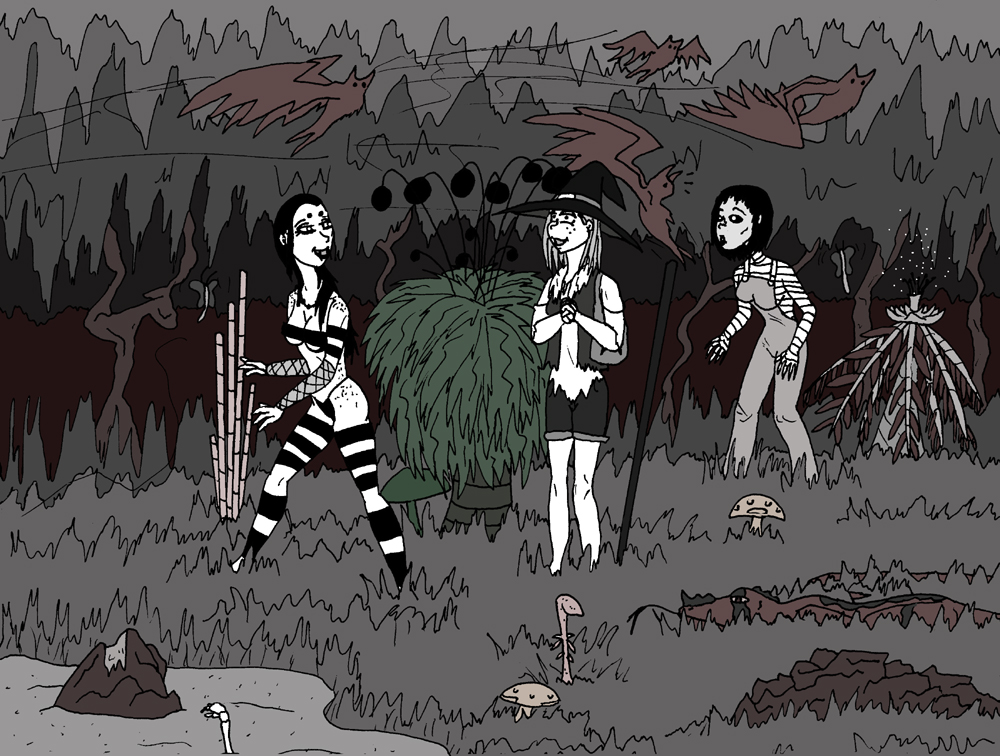 In general, most members of humanity do not enjoy wandering a humid wet swampland, filled with uneven terrain, biting insects, and off putting smells of rotting vegetation in the air. However, in the world of Xibalba, most of those people weren't around anymore to voice their opinions to Karolina. From her past, she knew the swamp as the forbidden place, where only the village's hunters would boldly stride into and come back home adorned with mud and a fresh catch, be it fish or perhaps a snake. As usual, she had questioned them whenever she had the time, but such moments were few. At the very least, she gathered a general idea about the terrain. Traveling in it, however, was proving far more exciting than any story.

As the trio walked with Bali navigating a path, Karolina was quiet, her attention thoroughly caught up in studying every little plant, bug, and bird call she came across. And there was no shortage of any of those. And unlike Siouxsie who was also silent during their trek, Karolina had many thoughts and wonders coursing through her mind.

"Are you still back there?" Bali joked over her shoulder. She knew they were even without looking, as she could hear them easily as they stepped on random fallen branches.

"This place is amazing!" Karolina marveled, taking in all the lush greenery and sights of semi-hidden animals. "It's so... busy! I haven't even seen half of these plants before," she stated, spying a cluster of bamboo near Bali's flank. Like the animals, some plants in the new world of Xibalba had mutated from human times, but it wasn't a flat rule across the board.

"It is nice, isn't it?" agreed Bali. "Not having too much trouble?"

"No, not at all. It's been mostly grass so far. I mean, it is muggy here, but I'm too distracted to care."

"Heh. Well, do keep an eye out as best that you can. I know there's a lot to take in here and this is new to you, but everywhere is basically dangerous too. Of course... some would say that's part of the charm," Bali observed with a more distinctly Xibalban viewpoint.

"Huh? What does that mean?" inquired the shovel witch, pulling her attention from some hand sized butterflies.

"I've been told I can be a little reckless. I like a challenge sometimes. I don't always shy away from danger, that sort of thing. But that sense of adventure is not necessarily unique to me. Not entirely. It's one of the main reasons Xibalbans as you know them actively stay in humanoid form, even if their natural body is anything but."

The shovel witch glanced about, looking confused. "Still not sure I get that, honestly."

"I wouldn't worry about it, really. That's just a fancy way of saying we can feel more things in a humanoid body than, say, an armor covered carapace."

"Ooh, okay. Hm. So, does that mean this is not how you really look then?"

Bali chuckled aloud and waved a finger, as if to clear the thought from the air. "Don't worry. For all pretensive purposes, this is the actual 'me' you're seeing. In any event, I don't want to distract you too much right now. Keep your eyes peeled for anything that might seem dangerous, be it creature or quicksand. Because as beautiful as the swamp is, it's also a garden of death, Kara. There are plenty of creatures out here that won't think twice about going after us if they feel they have half a chance."

"Geez. How do you get used to that idea?"

"You just live within the mindset of it. It's like swimming in the ocean. After entering, you're as wet as everything else around you. An ocean is dangerous- it has riptides, strong currents, and stinging jellyfish. But if you're afraid to go in, you'll always see the worst in it by that perspective. Rather, try to see both what is beautiful and terrible at the same time, if you can. To us, those concepts are almost interlinked at the core."