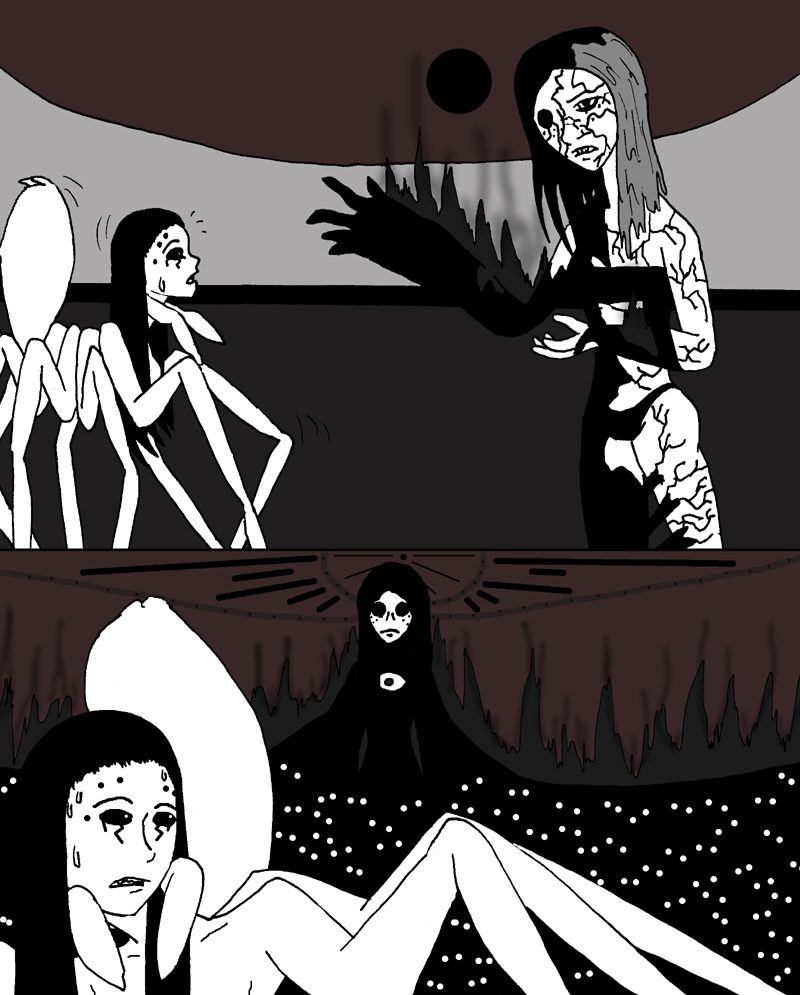 Once the arrangement was struck, Karolina breathed a tired sigh and she took on a distant expression. "So it goes. This dream comes to an end. The mind warps and distorts... I feel the shadows within the world return. This form will break like old porcelain and I will revert to that which is within the unsleeping world. When all is done, there will be but impulses left, for I am not composed as Atacama is."

"Chernobog will restore me to Xibalba, but know this is all I can be- stuck between two states of being- possessing my own shell in a desperate bid to know life. This is the cost of forbidden magicks, Metis."

"Remember all that you have seen here. All that I will forget, and all that we will recall. The part of me that entered with you will know nothing beyond slaying Kara. You are my only conduit to casting off this ignorance about myself in Xibalba. I need to know."

"And recognize this: this vision was not mine alone, but yours as well. We both walk under Chernobog's unyielding black gaze. Surely, you have realized that what was left of Kara was a pawn to this moment. She had no other use to him."

"Chernobog... is always... watching..." she said, as she rapidly decomposed into shadow matter, arising with a gloomy blaze of black fire on her arms, the very same kind that Karolina would occasionally let slip with little awareness of why it was happening. Her form was jet and pitch, revealing no form but an outline as the horizon broke down to a vacant distance, featuring a dismal dull eye within the sky. Further tiny white specks appeared from Karolina's shadowperson body. They were not motes of hope in this oppressively darkening place, but more eyes, hollow and dead within.

As she was, Karolina's mind was lost. A shadowperson could rarely deliberate any true thoughts, only whims, emotions, and impulses. Speech was robbed of her as well, and the eyes sank into a blank white mask, devoid of content, spiritual or otherwise.

Metis felt the vision break down further around her, as thundering indistinct chanting rattling her body from the air, speaking in tongues and forbidden psalms; that of Chernobog himself.

Though she knew herself as an evil spirit, this whole experience reminded her that the fell sea of darkness was impossibly deep, filled with stronger and more esoteric things than herself. And she was just one little creature in that impersonal void of shadow, something she sorely needed to be reminded of for her long existence riddled with hubris. This was not to punish her, however, only to confirm her place in a barely lit universe that scarcely cared about what walked, crawled, and skittered within it.

Like Karolina, the cost of a second chance in that universe had not come with the freedom to whatever she wished. She was Karolina's familiar now, for better or worse, and she could accept that role or be rendered into the nothingness. Anything had to be better than that.

When sight returned to her eyes, Metis stood uneasily within the chamber bearing the mirror that she entered with Karolina. The witch was already sitting there on the floor with her cap and book, looking a bit confused. She glanced to Metis and tilted her head.

"You're... much bigger than before. Like you were in the vision," she said, appraisingly. She had no way to recall, let alone know, that her inner shadowperson self allowed it to be so, through an infusion of potent shadow essence into their bond as familiar and master.

Metis took note of this. Karolina's true self held her side of the bargain. It was great to be of normal size again, instead of that tinier pet-like proportion that she was stuck with before.

For once, Metis did not approach her meeting with Karolina, using a haughty coldness. A deal was struck, yes... but she realized then that Karolina was as cursed in her circumstances as she was. They were living on the mercy of a dark old god that no one cared about. No one would really understand their situation better than each other.

It was peculiar for Metis. The feeling was... an ability to relate? A lone wolf normally, she had never had any reason to recognize that concept in anyone else. But here they were, in the way that they were. And Karolina was on her path to apotheosis... Metis' master would surely manifest a more arachnid nature as time went on. Knowing that it wasn't just Chernobog, but the totem of Spider herself that brought her to this situation as a familiar... well, things were coming together. And now she would be associating with the only person who had the capacity to understand.

Metis knew that she didn't deserve sympathy for her crimes in the past. No one had to care about her. But those days were gone, and would never come back. They were, in hindsight... admittedly empty. She wasn't even sure why she had hunted humanity for so many years, beyond some unthinking compulsion. At the end of the day, she was a beast.

Maybe it was time to change things.

Approaching Karolina, she observed the witch, her usually harsh expression softening a bit as she had been pondering all these thoughts. She knew this person was capable of compassion and kindness. She had treated Tom Thumb, who wasn't even her familiar, with more than a few ounces of respect.

"Master... Karolina... however you wish to be addressed... I apologize for my tone and behavior towards you to this point."

"This is not easy for me to say, but I wish to make amends concerning our, ah, partnership?" Metis glanced about awkwardly. "I think... I think I have a better understanding about you now. I think things happen for a reason, too. Life is not made of coincidences when the spirits are involved, in my belief. And I am but one spirit, and you, another."

Karolina just listened, searching the inky eyes of her now larger familiar. She said nothing, but merely studied her. The bond between familiar and master was now interlinked, as Kara was gone. The two could read each other's unguarded thoughts and feelings. And for her own sake, Metis was being genuine.

"I do not know what the future holds... but I know of the past. And in good faith, I have been asked to share it with you. For there was more to your vision than you recall, I imagine."

"I know I fought Kara... but it doesn't feel like I learned much in doing so," Karolina speculated. "I've been sitting here trying to riddle out what even happened."

Metis slowly knelt next to Karolina. She had never assumed such an obedient pose with anyone. Looking earnestly back into Karolina's eyes, she spoke, "I have seen that which your dream truncated. I bring, for weal or woe, the message of who you are. And my role alongside yours. I know I have been less than amiable and direct with you, so through the bond that we now have in Kara's demise, search my heart. You will know me as your messenger by the time I am done."

"I'm not sure I understand..." Karolina said, a confused expression on her face.

Metis nodded. "I know. But now, you finally will."


(This wraps up the current arc and it will be the last AG2 update for 2020. It's time for my usual winter break. Arachnid Goddess 2 will return in mid January. To whosoever is reading this, enjoy the holidays. We all deserve it at this point. -Chern)

Hey everyone, the holiday hiatus will likely have to go on for a while longer. Unfortunately, I've contracted Covid-19 and I'm thoroughly incapacitated. I'm in no shape to do anything at all at this time.