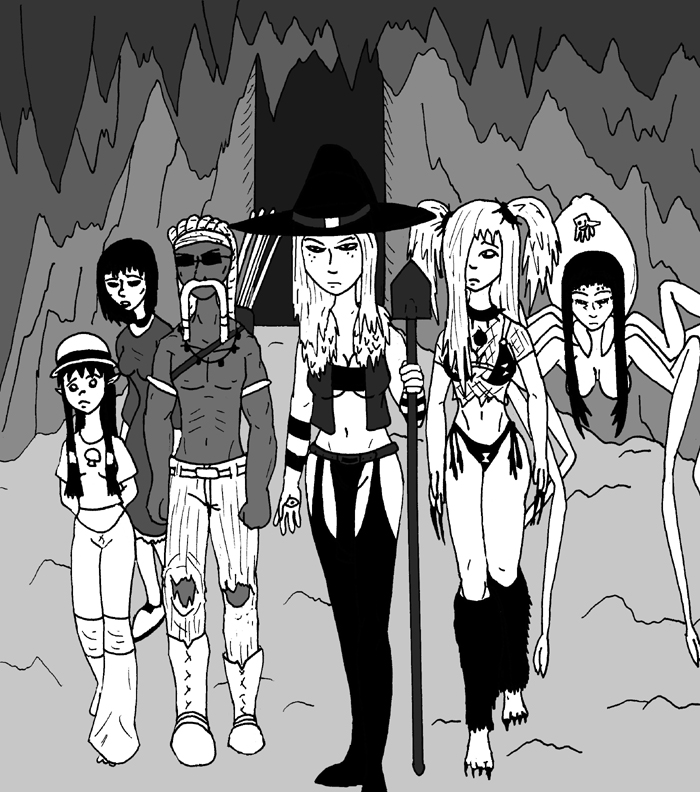 Another day had passed.

The time for partying had long since ended. With the exception of Ishmael, who would seek her enlightenment at Uluru as the spirits prescribed for her, everyone had a meeting of one sort or another with the Mimi. And aside from Rottkap, who had no vision to partake in, none were happier for it. It was the two sided blade of insight, something that transcended any age. In that sense, knowledge did not necessarily bring one joy.

Karolina had come back with a grim expression. In the time since her vision, she spent it studying in relative silence, and used the shadow magick of her witch's cap to update her look. Although she didn't say it outright, she wanted something that touched upon her journey and where she was in life. No longer simply a confused insecure individual, she was the shovel witch who learned from Bali, but knew her own roots better. The magnitude of who she was and who she became... these defined her new attire. It was a touch of Bali and a hint of Adelaide, in essence. And hopefully, something stronger and better for the journey she made from both. But her eyes didn't deny her mood. For all the confidence and self direction she gained, it was worn with heavier, sullen brow. Both Rottkap and Ishmael could practically feel her mood and they knew her vision had taxed her. But she was willing to lead and she was their Alpha, so they continued in her footsteps, certain they might know more in time.

For whatever happened to Karolina, it surely had some effect on Metis. The familiar was now quite sizable, standing almost as tall as anyone of them. But she too, seemed distant. They had no idea of what transpired, only that something did, and neither the familiar nor the witch wanted to speak of it now. Metis had not been close to any of them, which made it all that much more difficult. Yet, there was a sense of less stand offishness to her now. It was hard for them to put to words.

Tulsan seemed the least affected, but they knew better. They had seen him brooding quietly by the pool on the previous day, staring solemnly at his black necklace, the one said to come from Bali-la. Curiously, he did not take point today, but followed alongside Karolina. He too, for all his gruff quietness, seemed less stand offish.

And then there was Siouxsie. She was sporting a shorter bob cut and new shoes, no doubt issued from the Mimi in their generosity. Little did most of them know, aside from Karolina herself, that these things were how Siouxsie was seen with, back in Adelaide, although she still wore the angel's purplish dress. In the shuffle, it wasn't clear what happened with Siouxsie. But something did happen, and it was likely some Mimi-related intervention of her own. Gone was her happy dim smile. Now, just a strangely sad expression. It wasn't even clear if Karolina knew what happened to her, but the zombie was unwilling to speak about whatever she encountered in the Mimi's assisted visions. If questioned, she merely shielded her face in some kind of shame, and shook her head, unwilling to entertain even Rottkap's innocent questioning. Such independence was rather unlike her.

And so... that was the group. For all the fun that began in the Mimi's hospitality, whatever these people had learned did not seem to bring them any happiness. Rottkap shifted uncomfortably as she followed. It wasn't that the group was merry before this, but now? They were positively dour, and Ishmael could only look on with uncertainty as the newcomer. She kept trying to get Karolina's eye, but the witch seemed both focused and elsewhere all at once. What the hell happened?

It was time to leave. Karolina had gathered everyone together and offered little explanation or fanfare for the previous day's events.

"We have a journey to complete and we've sat idle long enough. Gather your things. We march for Uluru," she stated firmly.

This was a stronger voice, less doubting. It was one that came with Metis telling her the truth she hadn't been allowed to remember about herself. Karolina had died a long time ago during child birth. And thanks to several quirks of magic, all that was left was a shadow woman that wanted to pretend to be human and to believe that the life that all creatures take for granted, was hers to enjoy as well.

Yet at the end of the day, that's all it could be.
Just pretending. Held together by her aunt's spell and a dark god's self interested mercy.

But in her wake, none of them knew the one missing detail that set everything in motion. Something Karolina or Metis couldn't have known. Their vision concerned Kara and all that came with it. But what of before even that? When even Kara had been unaware?

The zombie walked quietly behind all of them, unable to meet anyone's gaze.
She was unable to speak of it, not due to magic or any curse, but because the shame was overwhelming.

In her limited state of mind, she had been informed about who she was and what happened in a vision. It turned out even an undead being could feel sick to their core.

At the end of the day... everything was her fault. So, she remained silent, and for once, intentionally played dumb. Karolina had enough set backs in her life. Let the poor thing reach Uluru for whatever it may bring, the zombie thought. And then, maybe then... she would tell Karolina, when the young woman had a sense of closure from Bali's final request.

And then, she would pray that a well deserved oblivion from the shovel witch would come quickly.

Nobody ever promised that initiation would be fun, or even easy, even though the eventual outcome is positive.

Aye. They're mainly in a weird place from what they've seen and learned.

It's what happens to people who pass through Brid's Forge.