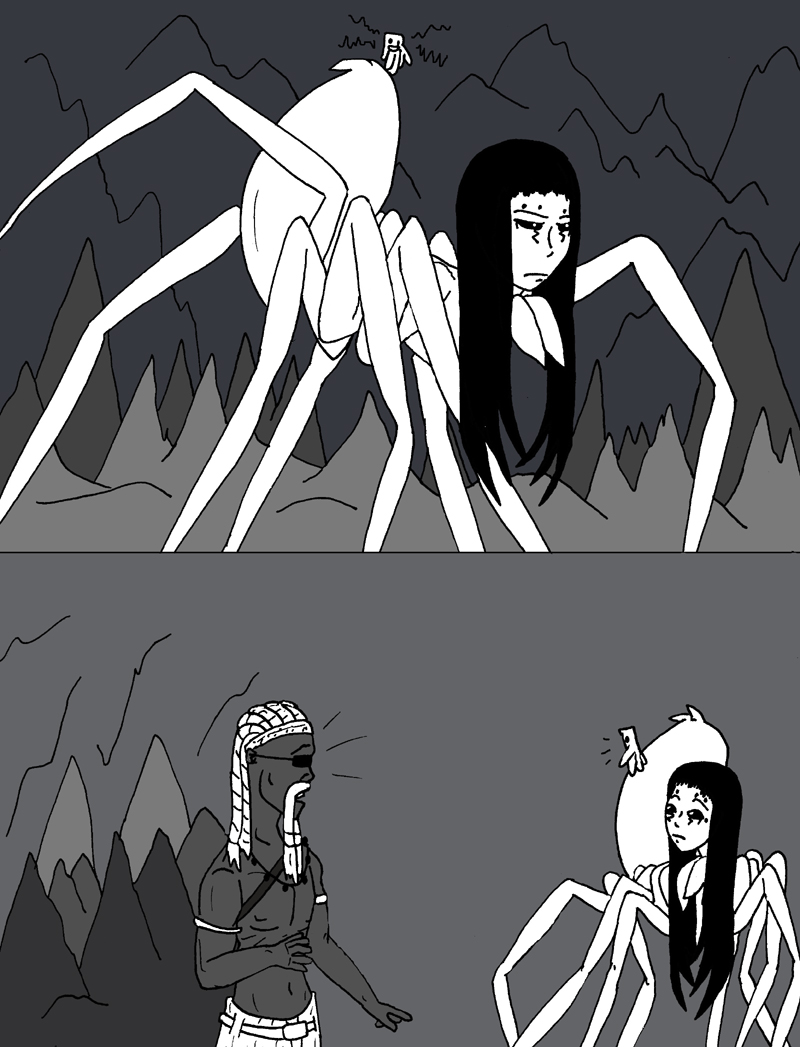 In the front of the group walked Metis, Tulsan, and Karolina, with Tom Thumb riding a somewhat begrudged Metis. They weren't particularly friends, given her tone and his spying nature, but Metis seemed to just go with it. Tom usually rode in Karolina's hair, but even he could tell it was time to give her a little space. Her personal aura was gloomy and dour, which made him uncomfortable.

But before long, Tom startled. Standing straight and twitching slightly, he soon spoke up in his little squeaky voice. "Er, a moment, please? If we could just stop for a moment... thank you. Mister Mune, I need to speak with you."

The aboriginal man grunted curiously and shrugged. He approached, a bit puzzled. "Mm?"

"Ah..." Tom began, "I have received word from my master, Brand... it seems there's a problem back at the camp."

By this point, the others gathered together and began to listen with him. Everyone had some idea of who Brand was.

There was a moment of silence, as people registered this. Tulsan, however, stared. He wasn't outrageously close to Brand by any means, but he knew he was there. "Who or what are they?"

Karolina seemed to rouse from her moody daydream. Down here and in the swamp, they hadn't been a thing whatsoever and seemed almost inconsequential for the time. The closest she'd seen in a while was the Karahydra, which was likely a corrupted monster that became infected.

"Geists?" Tulsan repeated. "How many?"

Tom paused. "A lot. I don't have numbers to provide, unfortunately. They're... trying to hold them off. There are certainly people at the camp, although not everyone stayed to fight."

"What about my cousin? And my father?" he asked, sounding more agitated.

"Still there with everyone else. Your cousin Beltresz is putting up quite a fight, but... Brand says they're not going to be able to handle this many. They're about to conduct a fighting retreat- I don't know where yet. Anyway, he just wanted you to know."

Tulsan gazed at the ground, squeezing his fists.

"Brand's camp?" Karolina said aloud. "Dammit. Goddamned geists... can we get back there in time?" She wondered if Blood Sensing would show them the way back faster and felt very responsible for this, as the geists came from her earlier incarnation.

Tom shared a leery expression. "Now that you know the way, to some degree it would be faster... but the camp would likely be overrun by the time you get there."

Tulsan took a deep breath. "No, this is my... problem. Brand is letting us know, it's a request for help. That's why Tom got my attention. Isn't that right?" He looked at the hand-shaped familiar.

Tom gradually nodded. "I would say it's both, but yes. I'm not clear if he expected you to rally everyone to go or whatnot... only that he knew it concerned you the most, given your family is in danger."

Tulsan sighed. "Karolina... I will deal with this. You guys have to continue to Uluru."

"I'm involved too, Tulsan... you don't have to play the lone hero. The geists are my screw up-" she said, before getting interrupted.

"No, you don't understand," Tulsan groaned. "Out of everyone here, I'm the most familiar with the camp's location. And I'm willing to put a bag of jewels down to say I might be the fastest. I can get there quickest if I go alone. Time isn't something they have a lot of, from the sound of it." He stared grimly for a moment, as if he was about to say something and then let it be.

"Is this wise, Mr. Tulsan?" Rottkap asked. "If there's a lot of them, going alone won't accomplish much, I'd think."

Tulsan patted Rottkap on the shoulder and sighed. "Look, I... have reasons for this. I know things have been tense or awkward between me and the rest of you to some degree- but I genuinely like you people. I'm sorry that I'm usually a bit difficult, it's a hard habit to shake. But being with you has given me a sense of motivation I lacked for a long time. And I feel like we're on a quest to do something important, even if we don't fully understand the end game. I will catch up to you, alright? I won't die."

Rottkap seemed to quiet down. "Okay, Mr. Tulsan... if you want a little faith, I'll give it." She looked around at the others.

Karolina searched his face, but couldn't read him behind his glasses. He seemed almost personable. And at the very least, valiant. She never really heard him speak like this. Was it simply because his family was in danger. "Tulsan, I... I can't and won't stop you. If you think you can save them by going alone, I'm going to trust your judgment. I've come to know you as someone who doesn't mince words. I believe in you."

Ishmael and Siouxsie nodded quietly. "Be careful out there," the Death Clan offered.

"Come back to us... friend," rasped the zombie.

"Trust in yourself, Tulsan," Metis said quietly with a respectful nod.

He smiled weakly. "Thank you, all. Now, if anyone is able, I need to leave a few of my things. I have to go as light as possible. Karolina? You should take Bali-la's necklace for now... just in case, I can't... Rott? Can I trust you to hold my glasses? I really can't replace them if they get damaged."

Karolina somberly took the necklace, stared at it, and bit her lower lip. She nodded, hiding her face under her hat's brim. Rottkap took the glasses, rather surprised, as Tulsan turned around, obscuring his expression. No one had ever seen him remove them before, but still he wouldn't let people see his eyes. Then he removed his boots and dropped his javelins.

"You're... not taking your weapons?" Rott asked, puzzled. "And you're going shoeless?"

"Dropping weight," he intoned. "Don't worry, I have a set of metal knuckles I keep in my pocket. If one of you can hang onto these, I'd be thankful. It's impossible to find boots in my size nowadays."

Karolina put a hand on the back of his shoulder. "Take care of yourself, okay? We'll be waiting for you. And come back to us, that's an order from your Alpha..." she said with a sentiment in her voice. She felt bad he was going to face this problem she inadvertently created by himself and that his family was being threatened for it. But she could also see he was one of them. And maybe he was realizing it too.

For a moment, he flinched slightly at being touched but slowly relaxed. "Yes... I will return as soon as I'm able. Tom! You're with me."

"Me?" the familiar squeaked, not expecting to head into a warzone.

Tulsan just stood there, waiting, not explaining himself further. Grumbling, Tom hopped off Metis and onto one of his dreads.

As he began to head away, he felt Rottkap's little hand on his. "Do your best..." she whispered.

Strangely, his eyes were closed from what she could tell. But he smiled. "I always will. Keep them safe for me, Rott."

And with that, Tulsan began to run back to the Mimi's lair, retracing his steps. The group watched him go solemnly.