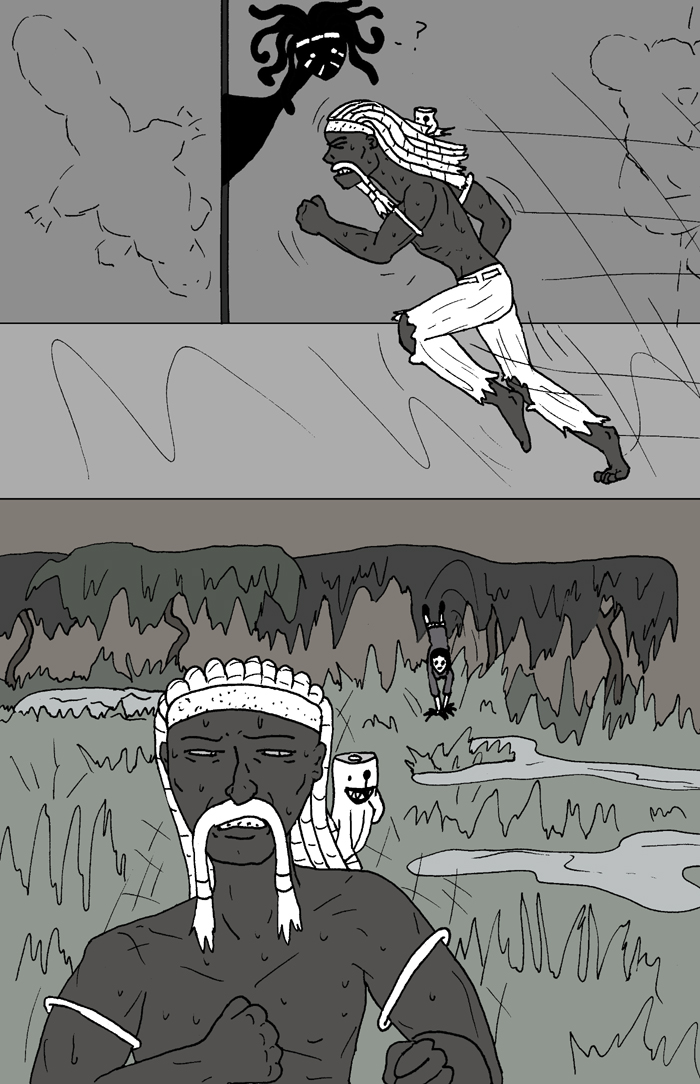 He had not jested in any way, Tom found. Tulsan never really did to begin with, but boastful claims were something the little familiar thought of as being rarely justifiable. Ego was the inner poison of many, after all. This was not one of those times. Xibalbans rarely had the capacity to run like this, let alone a human.

Tulsan had cleared the Mimi's lair in almost no time, which wasn't surprising since the straightest line through their halls, without a detour, was short and linear. He then ascended the cave entrance from which they first came from, past where they met Ishmael, and just... kept going. For hours. Running, running, and more running. The most Tulsan slowed down was to a jog at times, which seemed to be the equivalent of him catching his breath.

"I have questions," the familiar stated, rather than asked. "HOW?"

"How what?" Tulsan huffed, half forgetting Tom was riding on his dreadlocks.

"I mean, aren't you tired? You haven't stopped once. Not for rest or water. You're going to drop dead going like this."

"Thanks for the words of encouragement," Tulsan hissed.

"No, I'm being quite serious. Your stamina is unreal. You've been sprinting almost this entire time. Again, how are you not tired?"

"I move around a lot," offered Tulsan with little revelation. "I don't sit around for too long at any time, alright? On my own, I constantly hunt and track. I'm actually traveling slower for everyone else's sake in Karolina's pack."

"I've heard of Xibalbans who have done the same as you, Tulsan. They still stop to stretch their legs on occasion."

"Why do you even care?" Tulsan snapped, sweating heavily as he ran. "Are you asking for yourself? Or Brand? Because that seems interchangeable to me. If he's got time to ask me inane questions, maybe they're not in any danger down there."

"Then, let me keep things short and basic. Why did you bring me along, if I may ask?" the familiar questioned. "I'm almost useless in an actual fight."

"I don't need you to scrap with anyone. Brand's people are going to be on the move if the situation is as bad as I'm led to think. Because you have a mental connection with your master, I'll know where everyone is, instead of wasting time looking for them."

Tom nodded. "Okay, that's well thought out. But then what? I know Brand asked for assistance, but this... this is a horde of these things, as I understand."

"Then understand I have family, Tom! Do not badger me about this. If Brand is calling in someone from far away like this, he's doing it for himself alone. I don't need my father and cousin winding up as casualties with whatever is going on. Family, like words, means something, Tom."

Tom could see if he kept up questioning Tulsan, it would probably make him more irritable. And the man was already fairly cranky by default, or so was his impression. "Fair enough. Now, uh... why is Siouxsie following us at a distance? Well, she's galloping on all fours, really."

Tulsan squinted, obscuring his eyes from Tom, and saw the zombie chasing at a distance. He shook his head and kept going. "The zombie? I have literally no idea, but I don't have time to stop and ask. And I'm not returning until this business is taken care of. They need to respect that I have to deal with this, if that's what she's all about there. I thought I made it clear."

"By the way, Tom... how are things going for Brand's group right now?"

"Let's see... oh, ah... not too good. They're retreating to a hill. Definitely a fighting retreat. Brand's too busy to talk at the moment. They're looking at roughly twelve to one."

"Huh? You talkin' about their odds?"

Tom shook himself. "I mean, there's at least twelve geists to every person there. Their odds would be considerably less, realistically speaking."

Somehow, Tulsan seemed to go even faster. Tom held on for dear life, as Siouxsie fell further behind, but continued to follow the fast-moving dot in the distance.

Well played, yet again. The text is descriptive enough to stand on its own, and the graphics just add spice. Oh, and there's always just the right abount of character development.