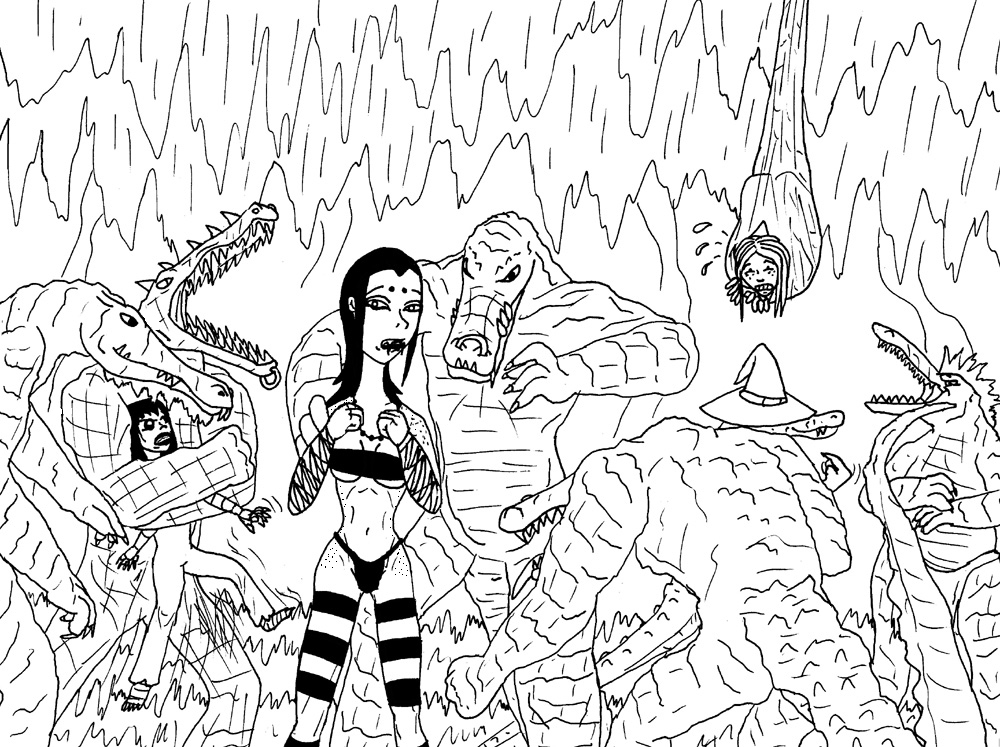 As they ventured, the conversation changed to more mundane yet important topics. Whenever possible, Bali-la pointed out various plants she knew for Karolina's benefit. The Xibalban wasn't an herbalist, but she knew more than the average member of her kind. And maybe one day, Karolina would learn why that was. But for today, it was enough that Karolina get an idea about the basics. Because she was so sheltered in Adelaide, she needed to know what was obviously poisonous and recognizable. Of course, Xibalba had no shortage of things to harm or maim someone, even on the foliage level.

To her credit, the shovel witch wasn't completely ignorant. Although she had never wandered outside town borders, she was allowed at the edge of the swampland surrounding the Adelaide. This allowed her a modest sampled measure of the variety of greenery in the area. Coupled with her inquisitive nature with the returning hunters, she was able to confirm a few notes as Bali-la explained the life around them. Which was good, because there was a lot to take in. Quietly, Bali appreciated the chance to teach the young human woman. It brought forth pleasant memories and in truth, she was no stranger to the art of instruction, although her caste was not that of a Sage.

Still, however experienced a hunter or a friend of the forest might be, one cannot prepare for all possibilities. Or notice them. Especially when lost in thought and tutoring a novice. When danger struck, she saw no signs of them or their traps.

In a sudden moment, caught off mid-sentence on the topic of flowering succulents, Karolina found herself being yanked skyward. With a yelp, her pointed hat fell off and she was brought halfway above to the branches of the dismal swamp trees, as she found herself trapped inside of a net. It looked similar to the silken bag that Bali-la used the other day to carry the apples and pomegranates, only bigger. Tangled and held taut with her head peeking out of a gap in the fabric, she tried to burst out, but the bag proved strong and tough, only stretching but not breaking.

Bali-la heard the noise and was about to turn to look, when she felt a large rough green hand clench over her spotted shoulder. "Don't move..." gurgled a guttural voice. Bali tensed, her fists already up in a defensive position.

Behind her, she could hear multiple individuals issuing out low bellowing groans, as well as the voice of Siouxsie speaking out, "Frieeend...?" followed by "You rough..." and then some irritated hissing of her own. What was happening? As Alpha, Bali tried to take in the situation as quickly as possible, but from what she gathered, it was an ambush and the strangers had the advantage in mere seconds.

Several more came into view on her flank. They were bulky, scaly bodied, and often hunched. Some were far taller than either her or her companions. But the look of them was obvious. Gator people. Crocodile kin. Even gharials. Or as they were recognized in the lands of Xibalba, the Longtooth Clan. They were known to lurk in swamps and wetlands such as this area, and in truth, Bali had assumed they were around even before she arrived at Adelaide. And it had been one thing to venture through their lands alone and undistracted, as opposed to a small group who didn't entirely know what to watch for.

However, she knew only hearsay of their territory. They were a bit different than Xibalbans of her kind, who liked marking their territories as a source of pride and to establish clear borders with neighboring tribes. Longtooths sought to control waterways and mud ridden terrain, preferring their neighbors to only recognize their scaly holdings as fluidic in nature. This allowed outsiders to mistakenly wander into their lands, which gave the Longtooth opportunities to ambush with minimal energy. Such as this moment now.

"What have we here?" moaned one. "A human in the bag, some yellowy barbarian woman... what is this other one with the short dark hair? She looks ill. Mmm, it matters not. Guuhhhh... stand down barbarian. Or the lot of you will be torn asunder here and now."

Bali felt out the situation. It sounded as though there were somewhere between four and seven of them. One Longtooth was problem enough- these beings were known for being bipedal tanks, both strong and tough. No one would mistake them for an easy fight ever. Swallowing hard, she relaxed tentatively. This was not a battle she or they together could hope to win. "Very well... I suppose you were hiding in plain sight, weren't you?"

"Astute," the voice grunted. The Longtooth were experts in blending in their large forms with mud and plant life. They only needed to be nearby, waiting and dreaming in the heat as they were said to do. "You are the Alpha of this group?"

"Then, Bali-la, tell your subordinate held by my brother to cease her struggling. We don't need to keep you alive, you should know."

Bali was allowed to glance behind her, where she observed Siouxsie carrying on like a maddened badger. She hissed, gnashed her bony teeth, and kicked uselessly, all in an effort to turn around in the grip of a gator man and attack. "Siouxsie! Stop. Don't fight now."

The zombie looked confused. "Not friendsss...?"

"No, they are not. But don't fight with them, okay? They'll hurt you and Kara."

The zombie pouted but complied. "You rough..." she elicited to her captor.

"Bali?! What are they going to do to us? Who are they?" called out Karolina, as gator men wrested her and the net down from the old cypress trees.

The human mewled nervously as the net was wrapped around her like a papoose. A gator man slung her over his shoulder and stood waiting for the others.

"What do you want with us?" demanded Bali of one of her captors. "We weren't looking to cause trouble with your people."

"You couldn't cause us trouble if you tried, barbarian," said the voice again. She recognized a Longtooth with a moss-like beard as the one who was still addressing her. "And it matters not what your business was here or somewhere else. You will be brought back to the village and your usefulness will be determined. If you have some skill, we might keep you. Or you might be eaten alive. Xibalban and human bodies are something of a delicacy. We covet meat in all of its forms."

"Not necessarily. But that remains to be seen. Now walk! Their safety relies on your obedience, Alpha."