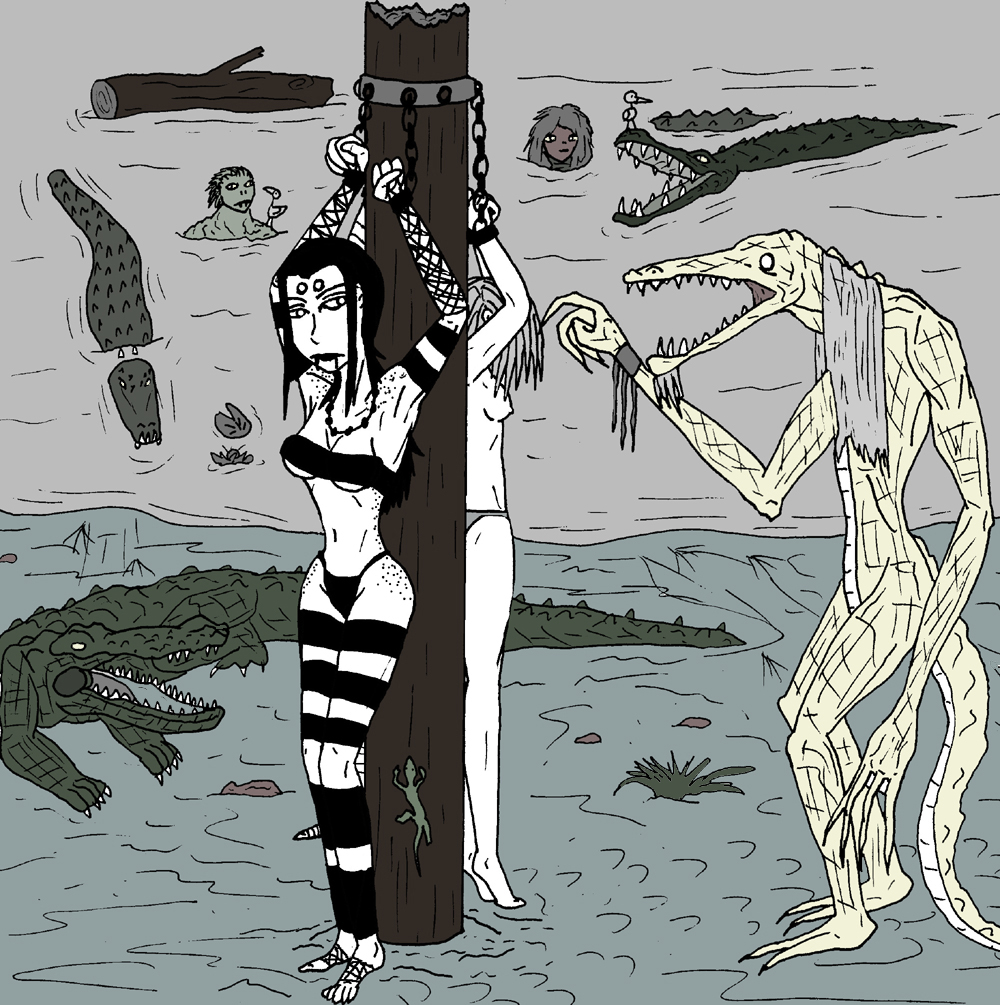 The three girls were taken into a more open marshland, consisting of several small bogs acting as satellites around a larger stagnant pond. Unlike the swamp they came from, the foliage cover was light to non-existent here. Everything was either mud, scattered weeds, or outside forest debris. Of the latter, there was a significant amount of fallen logs, most neither too big or small. Bali figured the presence of those dead trees was intentional, for there was a number of them simply floating in the numerous pools of water in the area. As such, they were perfect cover for the Longtooths in their own domain, as one could not easily pick one from the other at a distance or without a moment of precarious study.

Along the way, Bali caught Karolina's attention, using subtle facial gestures and indications with her eyes. The shovel witch was quite scared and distraught, but did her best to focus on her Xibalban companion's silent communication.

Once her attention was gained, Bali looked pointedly to Siouxsie and then back to Karolina. Making it seem as though she were yawning, Bali put a finger to her black lips, indicating silence. Karolina sniffed, furrowing her brow to understand. She was not dumb, however. Although she didn't full comprehend Bali's intent, it seemed the spider woman wanted her to stay quiet about Siouxsie. Karolina nodded, but her mind wondered what was exactly meant. Perhaps the undead were taboo here? Or maybe letting them know she could raise a zombie would not end well. Unsure, Karolina decided to be generally vague about Siouxsie, as she deduced what was soon to come.

After a certain time of being gawked at by the many tribes people of the Longtooth while they worked small fresh water fish farms, the girls were chained about the wrists to an ancient wooden telephone pole with a banded iron bracket that had managed to stand the test of time. Shackled with their hands above them, they were watched by all sides by gator people and common crocodiles. Some lounged in the nearby pond, while others sat adjacent to the shore. Unlike Bali, almost all of them were significantly hybrid looking when compared to herself. It spoke of their personal preferences and level of human interest.

They met with by a lanky Longtooth. His arms nearly draped to the ground and his skin was a peculiar creme white coupled with vacant eyes. Just as curiously, this particularly Longtooth possessed long grey hair and what seemed to be some form of a chin beard made of scale. His body was somewhere between that of a gharial and a crocodile, if such a creature stood as a man would.

At first, he only seemed to observe them mutely. Bali stole a glance at his dead white eyes and wondered if he was born blind, as the subtle healing nature of the shadows did not protect one from birth defects or, perhaps less likely in this case, desired or self inflicted injuries. There was no pupil or iris within that gaze of his, and it gave him a slight soulless quality. Still, he looked more atypical than outright evil.

Then before long, a number of Longtooth approached Karolina, as though they had been sizing her up all this time and she hadn't noticed. With no explanation or discretion, they began to specifically tear and remove her clothing. Karolina was notably alarmed at this and began to kick and scream, but the barbarians of the Longtooths had little to fear from her. Bali stared accusingly at the pale gharial, who had not gotten involved. If he noticed, he didn't let on.

In under a minute, Karolina was stripped down to her light blue string bikini bottom. She hung her head, her body half naked now, and used her hair to cover her face in shame. Bali could hear the poor girl cry. It certainly seemed like a bullying act and perhaps a prelude to worse things. Additionally, Siouxsie had her overalls removed, but she was still covered with bandages underneath. And in truth, she didn't know she needed to care about not wearing them.

"It's okay, Karolina... they're not going to do anything to you. Not in the way you're thinking, at least," Bali-la tried to soothe.

Karolina sniffed. She had been wincing and clenching, and her eyes had been closed come mid-way through the dehumanizing attack. "Huh?" The Longtooths were gone now, save for that silent creme colored one.

"Xibalbans have a long history with taking trophies and human made clothing for trade or as a prize. There's not a lot of human clothing left after all this time, so it's desirable for them. I know that doesn't excuse what they just took, but they're not likely to take advantage of you. Just trust me on that."

Karolina just shook her lowered head. "Okay? So, we get eaten instead. That's so much better," she noted with bitter sarcasm. "And what of my spell book? My hat? My shovel?"

"Yes, what of those?" Bali said, side glancing to the still silent Longtooth. "Are you getting involved here or do we just smell good?"

"Well now..." The Longtooth finally uttered, raspily. He enunciated primarily with his throat rather than his long jawed mouth, which seemed to move slowly compared to the rate of words he spoke. His voice sounded old, but deliberate and intelligent. "I do believe you were told that being eaten was only a possibility, not a guarantee. First, I am here to ascertain who you are. I am Rathalos; shaman of the Longtooth Clan. How do you identify yourselves?"

"I'll answer for the group, if you don't mind," Bali told him, speaking up without much fear.

"Ah yes, I was informed that you were the Alpha. Go ahead."

"I'm Bali-la... I'm with the Death Clan. Karolina is a human from the settlement of Adelaide. Siouxsie, we met along the way."

Karolina listened carefully to her companion's wording. 'Death Clan? They were spider people like her?' she pondered. She also took into account Bali's fib about Siouxsie. The idea seemed to keep Siouxsie's identity as obscured as possible, noted Karolina. She was beginning to see the responsibilities and importance of an Alpha... Karolina knew she would have either tried being dead silent or blurting out whatever they wanted to know. Here, Bali controlled the flow of information much more skillfully than the witch could have.

"Hmm. Death Clan, eh? So you're an assassin like your broodmates, is that it?" Rathalos said with an unreadable tone.

"Yes and no," Bali responded with a dark expression.

"Everyone from the Death Clan is an assassin by upbringing. That is common knowledge, Rathalos. But it is not my caste. Of course, I could be lying."

"Maybe. Maybe you're not," he said, not missing a beat. "What caste are you, might I ask?"

Bali stared at him coolly. "Courtesan."

The Longtooth scratched his chin, seemingly puzzled. "Courtesan? We have no such caste here... but I've heard rumors about your people, Death Clan. About all sorts of odd little nooks of life your people live."

"I'm sure some of it must be true, too," Bali observed dully. "Is there something more relevant you want to know? Or is casting dull barbs about my clan enough? As last I checked, your people and mine have nothing in common together, nor a rivalry or alliance."

The Longtooth chuckled. "Heh. What a tongue. I suppose I've wandered from more important things. Very well, listen closely, all of you. Your worth to us is based on what you can offer us. If you have a skill, or a trade, or some value that keeps you alive, name it."

Karolina's mind wondered about all this talk. Castes? Clans? It was no time to ask about such things, but she had some idea. The idea of a clan wasn't hard to understand. But it seemed a caste was perhaps an occupation or station in life, at least in regard to one's own clan. Still, what did Bali mean with the talk of possibly being an assassin and yet not? Karolina believed it to be a reference to the Xibalban's spidery nature. They were certainly more assassin-like creatures than not.

And more importantly, what was her value? The implication being that serving this clan would keep her off the dinner plate was quite relevant, as being devoured by a man-alligator was very low on her list of 'Things I Like'. She remembered that Bali said something along the lines that being a mage would potentially earn respect, but her own confidence was sorely lacking in that department. Even what little she did know, she didn't practice very well. After all, she was a gravedigger first and foremost...

"I can sing and dance," announced Bali, with a hint of professional pride. "I have no problem performing these activities for your people, if you wish."

"Hmm... and you, girl?" Rathalos questioned of Karolina. "What did you do in your village?"

Karolina hesitated for a moment, allowing herself a last minute check up. "Ah... well, to be honest, I was a grave digger for my town. I know of burial practices, I'm a hard worker, and I can dig quickly... if I get my shovel back, that is."

"Um..." Bali quickly tried to interject. She knew anything Siouxsie would say would probably not help things right now. "We're in charge of Siouxsie. We watch after her."

"Eh? You care for this person you simply met along the way? That doesn't sound very believable. Let her speak for herself." They all looked to the zombie woman, but the zombie just gazed on absently. "Me Siouxsie," she finally blurted.

"She's, ah, human. Really. She's just low on energy from hunger, is all. Siouxsie's not a big conversationalist, you see. We watch over her out of necessity. She can't really be left alone, you see."

"Frieeeeends..." said the zombie gleefully. They were talking about her! Hurray! Siouxsie is best! Or so her loose thoughts went.

"Interesting. You've taken in a charity case in this human? How unlike your kind that is, Bali-la."

"I am their Alpha," Bali reiterated. "And she may prove useful in the future."

"You're a curious bunch..." concluded Rathalos, deliberating. "I don't think you're entirely telling me the truth whatsoever, but still... interesting. I would imagine a 'courtesan' would be quite good at the art of speaking. Of that, I believe you fully."

"Well... we don't don't need an artist here, to be frank. If the girl there is as hard working a ditch digger as she lets on, we might have a position for her. As for the other one... we'll see."

Bali frowned. "I see where this is going. What's it going to take, Rathalos?"

The gharial smiled a toothy grin. "I may have just the task for you two," he said to Karolina and Bali.

He continued grinning. "Well... are you familiar with the idea of collateral? Guards, take them to a hut, but leave the one with the bandages where she is. I have important matters to discuss with these two."