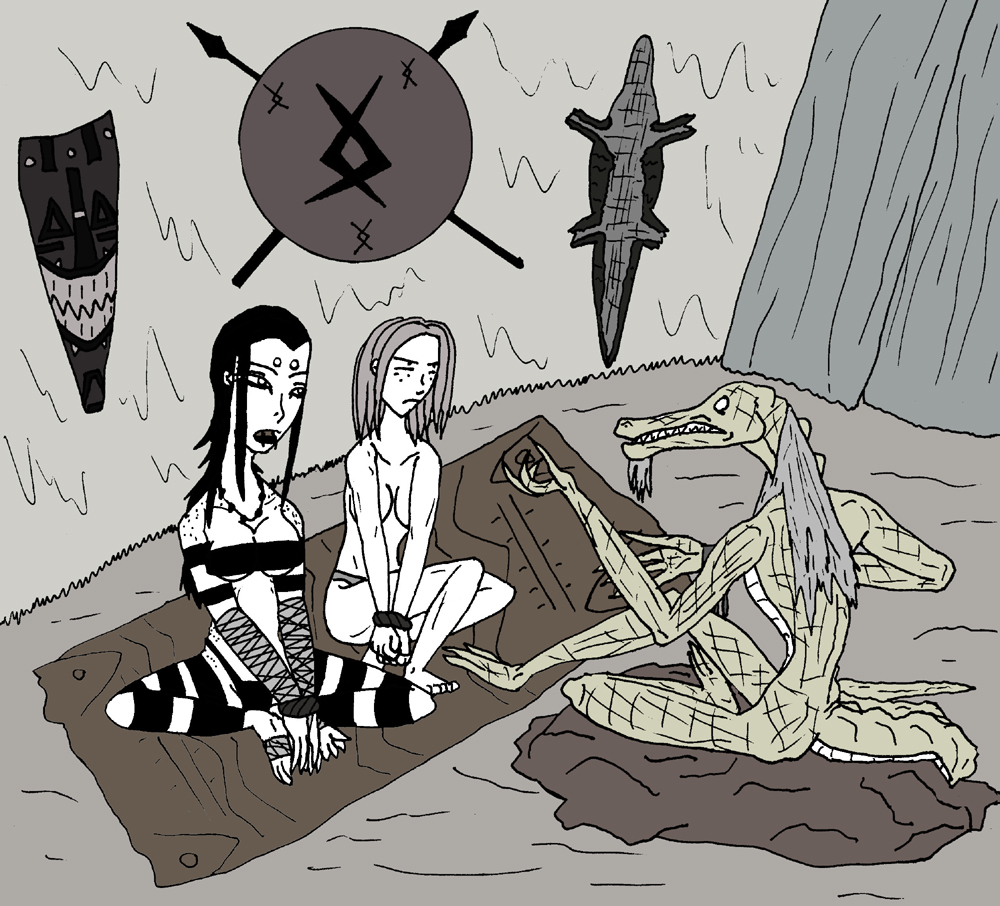 They were walked across the muddy flats of the Longtooth village to a series of isolated huts. The structures consisted of small thatched buildings, primarily constructed from dried river straw and swamp cattails. A duo of the gator people led Bali-la and Karolina inside, but not before rebinding their wrists together firmly with a thick loop of grimy rope, which was likely repurposed from some mooring line from an old human era boat. Vehicles typically didn't exist in any functional state in Xibalba, but their components and debris certainly did.

Glumly, the two girls were ushered inside and made to sit on a crude tribal blanket over a dirt floor. The walls were decorated with masks, crude ornamental weaponry bearing the 'crossed jaws' sigil of the Longtooths, and even a small alligator hide. Perhaps it was some pet and the equivalent of stuffing a deceased beloved family dog. Or maybe it was intended as an insult. Neither of them were certain.

Shortly, Rathalos arrived, circling around them before settling on an uncomfortable looking rock centered in the middle of the hut. The guards then left them in peace. For a moment, Rathalos squinted and studied them, scratching the fronds of his odd chin beard.

Karolina, who was growing irritable for still being half naked and for being sequestered away from the others like this (she still partially suspected the worst), glared openly at Rathalos. However, she still yet held her tongue.

"Adelaide, eh?" Rathalos began, seemingly different, less smug in this hut. "I thought that place was destroyed. Our scouts said it was nothing but ruins."

Karolina blinked. Where was this going? "What? What do you care?"

"Just thinking out loud, I suppose," he sighed, looking wistful. "I'm from Perth, myself. As far as I can tell, anyway."

"Perth... hey, I've heard of that city. My father mentioned it was once the capital of Australia," said Karolina, puzzled and taken aback. "Before the Herald."

"That's right. I was there when the world fell apart," he said. "If Adelaide is in ruins, Perth was wiped off the map entirely."

The shovel witch shook her head, trying to make sense of what he told her. "Longtooths existed in the old capital?"

Rathalos frowned and made a slight dismissive gesture. "No, no... not as far as I know. I meant that I was more openly human back then. I was laying in my death bed at the hospital before the shadows revitalized me of my illness. I don't think it was anything more than dumb luck that I made it through that dreadful week. It's almost a blur now."

Her face was incredulous. "Wait... lemme get this straight. You were just another human, like me. All the way back then."

"And you survived. And became a... Xibalban?"

Rathalos looked to Bali-la appraisingly. "Does she not understand what-"

"No, she's new to this," Bali said, trying to mediate the matter. "She grew up isolated in Adelaide. She doesn't know a great deal about Xibalbans or Xibalba, for that matter."

"Oh my..." uttered the Longtooth, seeming genuinely surprised. "Well! My dear..." he said, looking back to Karolina. "I meant no disrespect. Truth be told, I can barely see either of you very well. The shadows never could clear up my poor eyesight. But to know a human who hasn't taken up with a clan or any other group is, well, rare. You and to a degree, I, are part of a dying legacy. I'm sure you've heard that humanity is fading from the world. Going extinct quietly, as it were. In my case, I couldn't handle Xibalba on my own terms, so I took up with the Longtooths to survive. Granted, its a bit more complicated than simply signing up, but... we had things in common."

Karolina looked lost, processing this fact. Humans were becoming Xibalbans somehow? Was everyone like that? She glanced to Bali-la wordlessly, wondering that very question.

Bali smiled weakly. "I was never human if that helps, Kara. Eh... there's a lot of semantics to it, don't worry about it right now. Why don't we get back to why we're here, Rathalos."

The Xibalban reptile glanced about, sensing the room was settling down, albeit with a somewhat more confused human in their company. "That sounds fine to me." He cleared his throat. "So. I wanted to talk privately. We might be able to work something out together. Not just for your Siouxsie companion, but something that gets you all out of here entirely."

Rathalos sighed, rubbing his shoulder. "We have enemies, Death Clan. Not many, but we have them. Do you know of the Ophidians? They're usually not far from wherever we hold our territories... we do like the same locations, after all."

Bali nodded, slimming her eyes. "Hmm. I'm a bit more familiar with them than your clan, actually. You're both old groups, too."

"Ophidians?" Karolina inquired on the side.

"To continue," spoke Rathalos, "Have you ever known an enemy worth saving?"

Bali nodded with a gleam of experience. "Absolutely. What happened?"

"She's an old friend. Back... well, when I wasn't as you see me now. She helped me make that transition from being reborn in an alien world to where I am now. I would like to repay that debt." He glanced at Karolina briefly, his view lingering for several moments, before turning to Bali once more. "I was never cut out to join her people and eventually, we had to part ways. I lost contact with her for a very long time, but I always remembered that unexpected kindness she showed me. I remember her more clearly than awakening for the first time in Xibalba, healed on a broken hospital bed."

"Longtooths and Ophidians cannot get along. Our rivalry goes back many lifetimes, as I understand it. And it has been suggested to me by those of a higher rank within my people that I should not speak of her in familiar terms, lest I seek to show weakness about myself. Hence the privacy."

"I understand," said Bali in a reassuring tone. "What would you like us to do?"

"Her name is Saiya. Recently, she was discovered nearby by a patrol and driven off into a narrow cave we cannot fit within. Additionally, my people crave the sun as much as possible and would not do well for long down there. I have no report about her making her way back out and I don't believe there's another exit down in said tunnel. You two aren't as bulky as we are, so I would like you to go down there and make sure she is safe. Officially speaking, I am tasking you two to kill her as a sign of warning to the Ophidians against invading our territory."

"But... you just said... I don't understand what you mean,' said Karolina, confused.

"But you do, don't you, Death Clan?" asked Rathalos with a discerning tone. Bali breathed in deeply.

"I do," she concluded. "We can do it. But this will free us and Siouxsie?"

"Yes, if you can manage it quickly. In truth, I have an idea about what she is. And my people will figure out eventually, too. They won't find any use for Siouxsie either, nor will they consider her, erm... edible. I would say you have about three days time to find Saiya and bring proof of her end at your hands. I doubt I can stall judgement over your friend longer than that."

"Is the tunnel close by?"

"Yes, it's not far. I can take you there as soon as you like, if you're agreeable to this."

"We've been traveling for most of the day, but for Siouxsie's sake, we should make some haste. We'll take our chances below. But I have a condition, Rathalos."

Bali nudged her head towards Karolina. "Please return her things. Her clothes, the shovel, everything."

Rathalos frowned. "I will try. I'm sorry, but I don't handle that sort of thing and my word only goes so far. I will attempt to negotiate on your behalf and meet you at the cave entrance. Will that work?"

The two women looked at each other. Although Karolina had been confused many times during the conversation, she understood the goal fully. "It's better than rotting here, right? Let's do this for Siouxsie."

Bali grinned. "I agree. We can't pass this up. That said..." She turned to Rathalos. "Is there anything you would like me to tell this Saiya woman? Mm, I am imagining you two won't meet any time soon."

The Longtooth nodded. "Yes. Tell her... tell her Richard Walker says hello. And he's sorry for how his people treated her. And... that he hasn't forgotten her at all."