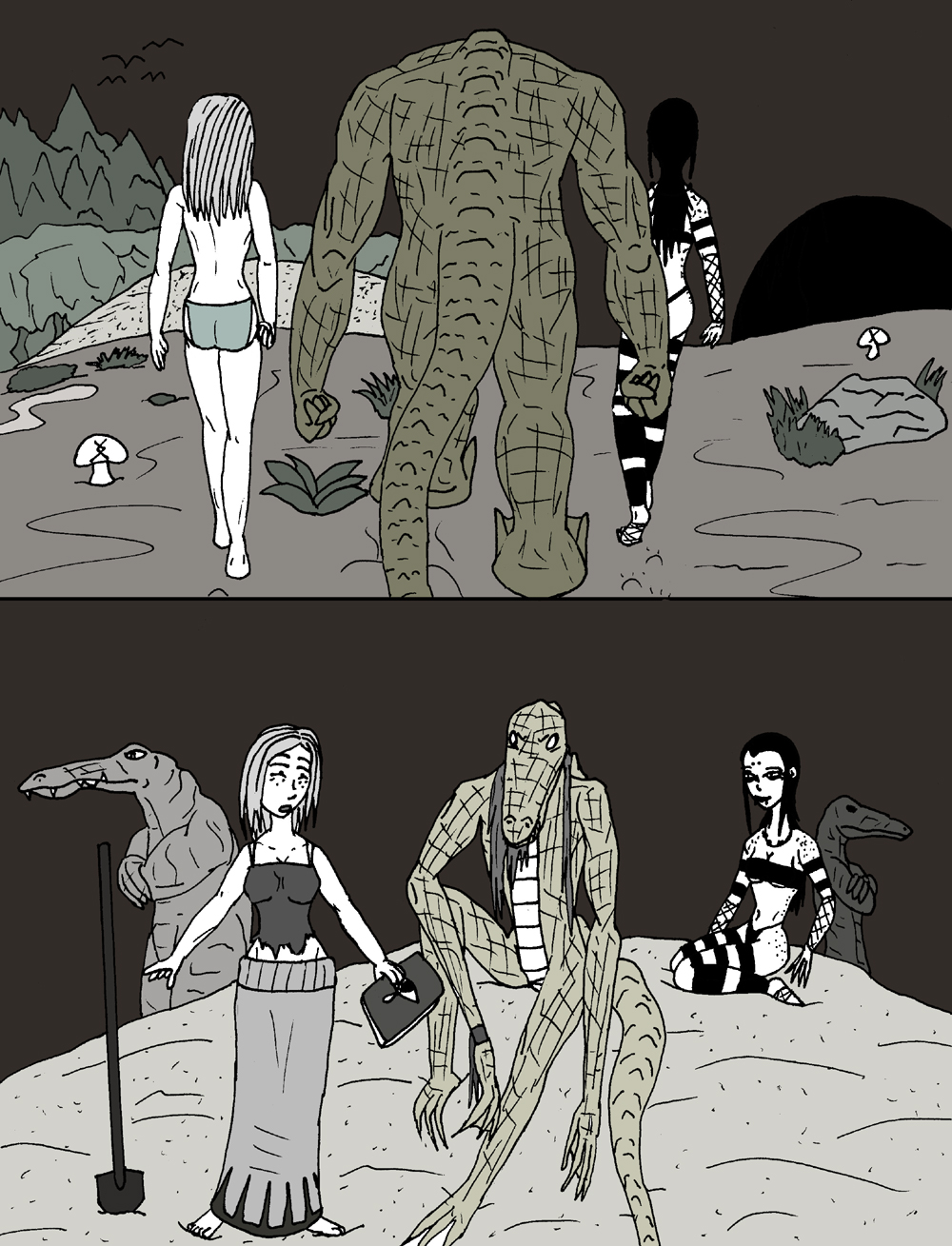 Not long after meeting with Rathalos in private, the wheels of whatever bureaucracy the Longtooths possessed, had turned. Karolina and Bali-la were finally freed of their bindings. While pleased to be unrestrained, Karolina found there was a caveat. They were assigned a massive goon of an crocodilian. He was a huge lumbering mass of scales, even compared to some of the others.

"You are to follow me to the sandy hill cavern," he groaned to Bali. "There, you will wait for the shaman." His voice was utterly devoid of any personal interest and Karolina got the idea he wasn't tasked with this assignment for his brains. Still, she knew his presence wasn't a meaningless one. Not that they intended to break away and skip out on their arrangement, but she knew the base animal that composed most of this humanoid was deceptively fast. Hunters from Adelaide occasionally brought in small gator or crocodile carcasses and told stories not only of the creature's power, but the sudden short bursts of speed they were capable of. One such story followed the death of a hunter in a boat, who was stunned by an unexpected tail whip to the spine for encroaching on the animal's territory. Karolina got the impression the Xibalbans had more than a few aspects in common with their animal counterparts.

With no particular fanfare, they were led away from the muddy main village onto drier land, somewhat elevated from the rest of the area. The journey was quiet, with the large guard speaking nothing and only grunting occasionally. They walked west, following the setting of the black sun of Xibalba. The sky grey from orange to a smoky dusk and it reminded the shovel witch of just how long they had been traveling this day. Her feet were tired, but she dared not speak such a complaint now, nor did she want to appear weak next to the goon or Bali-la. As for them, they seemed to be lost in a daydream, gazing at the falling dark orb. Karolina did not know if that was a coincidence or the nightly sun had some significance to them, but she had to admit it was almost soothing in its simplistic symmetry.

They soon arrived at the location of the sandy hill where the narrow cleft into the earth was said to await them. Several more Longtooths stood a loose guard here and acknowledged them with a nod. In the distance, she could see the mangroves of the swamp and in the fading glow of the day, mountains somewhere beyond. As she observed her surroundings, they were ordered to sit and wait here by the mammoth sized Longtooth, so they did, lacking reason to be quarrelsome. He stayed nearby but did not join them in repose.

Bali looked to Karolina and smiled. "How are you holding up?"

"Maybe a bit tired and frustrated, but I guess I'm fine. Just happy not to be in that village now. How about you?"

"Yes. You took our moment of captivity fairly well. Without making much of a fuss, it allowed us to get out of it easier. I don't know... I suppose I wasn't certain how you would handle such a thing, especially on your first day outside Adelaide."

Karolina chuckled awkwardly after a moment of reflection. "Is... is that a normal thing? Getting captured like that?"

Bali sighed. "I'd love to tell you no, but yes, it is. We were on their territory and we got caught. There was no way we were going to fight our way out of that. Simply put, it happens. Not everything Xibalbans do seems more moral or proper, from what I understand of how human sensibilities worked. We do a lot of bad things to each other, but there's often a chance to change your fortunes in those cases too."

"Well... assuming they weren't going to enslave us to some task like they were leaning, there was the aforementioned 'gonna eat you' routine. See, Xibalbans regularly take captives for food purposes. It doesn't mean they were going to kill us, but we would have been maimed horribly, I'm sure."

"Xibalbans operate under idea that one of the Laws of Shadows, that is to say, what governs the world, can be used to our advantage. One of the Laws is the ability to eventually recover from any wound inflicted by an outside source if you can survive it. Sometimes that means a great deal of will power- to believe you can persevere and hang over. The Longtooths probably would have removed our limbs and left us to regenerate them over time- which would begin the cycle again."

Karolina looked on, horrified and wordless. She knew from her parents that a thing called disease once haunted the bodies of mankind and animals alike, but it vanished due to some strange quirk of the shadows of Xibalba after the Herald event. And as she thought about it, she did remember hearing about someone's missing finger eventually reforming itself after a man had an accident sawing timbers. But to exploit that for cheap food? It was disgusting.

"My god... so we came that close to some kind of waking torture? That sounds horrible!"

Bali nodded modestly. "Not all the clans are so brutal- it depends on their needs, temperaments, and diets. But I want you to be aware of this now, in case anything else happens- these things can happen. Xibalba is dangerous. And I'm sorry for getting you into this situation in the first place."

Karolina was quiet for a bit. "Could it have been avoided, though?"

Bali seemed to think on it, her gaze becoming distant. "What's the saying? Hindsight is 20/20? We can't live in terror of the decisions we make, always wondering if the other path was a better one. Xibalba is not safe, Kara. Nothing we do is safe, nor anywhere we will go. That is the truth of our world. All we can do is do the best we can to assert ourselves over the challenges of the day. I know that's perhaps cold comfort, but I feel it is better to be straight with you now. This is not Adelaide, my friend."

Karolina slowly nodded, trying to take it in. She could only begin to wonder what she got herself into. And yet, a part of her was still content not to suffer a slow dreary existence in Adelaide, burying the lost.

Before long, Rathalos showed up and greeted the two. "Still intent on investigating this now?" he asked Bali-la, noting the time of day.

"We'll manage. We'll probably rest inside. And likely better than being chained up in your village," she said dryly.

"Heh. Fair enough. Well, these are for you, Karolina. I have the book that was in your satchel and your shovel implement. I could not barter for your clothing items back. Original human attire often has too much trade value. As for these things, my people dig fine without tools and we cannot make sense of the writing in this tome."

Karolina somberly took her things back. It was something at least. Both the spell book and her trademark shovel were special to her. "I suppose I should thank you. Still, I'm not keen about parading around half naked. Um, no offense Bali."

Rathalos nodded. "As you say. You may be appreciative, though, for I have gathered some garments for you, made by our own crafters." He then handed her a series of folded cloths tucked under his elbow.

The witch was curious but was quite willing to try them on. Quickly donning them, she had been gifted with a shoulder strap deer hide halter and long skirt with a large quilted waist hem and a simple tooth pattern at the the bottom. It was loose and oddly comfortable.

"This... this isn't too bad, actually," she said, moving in the new clothing. "I think this could work. Hmm. Thank you, Rathalos."

"I hope they are of your liking. I didn't know your sizing, so I merely guessed. You may keep those when you succeed."

Bali-la stood up, dusting the sand off her legs from a prior sitting position. "I appreciate it too, Rathalos. Now, we're going to get started. But make sure you uphold your end of the bargain."

The crocodile man nodded. "I will. But remember, you need to hurry for your friend's sake. I cannot stall my people for long."

"We'll be back soon," she promised. "Oh. And you should give Siouxsie a little meat each day when you get back. She hasn't eaten today and I suspect she's not far from becoming feral."