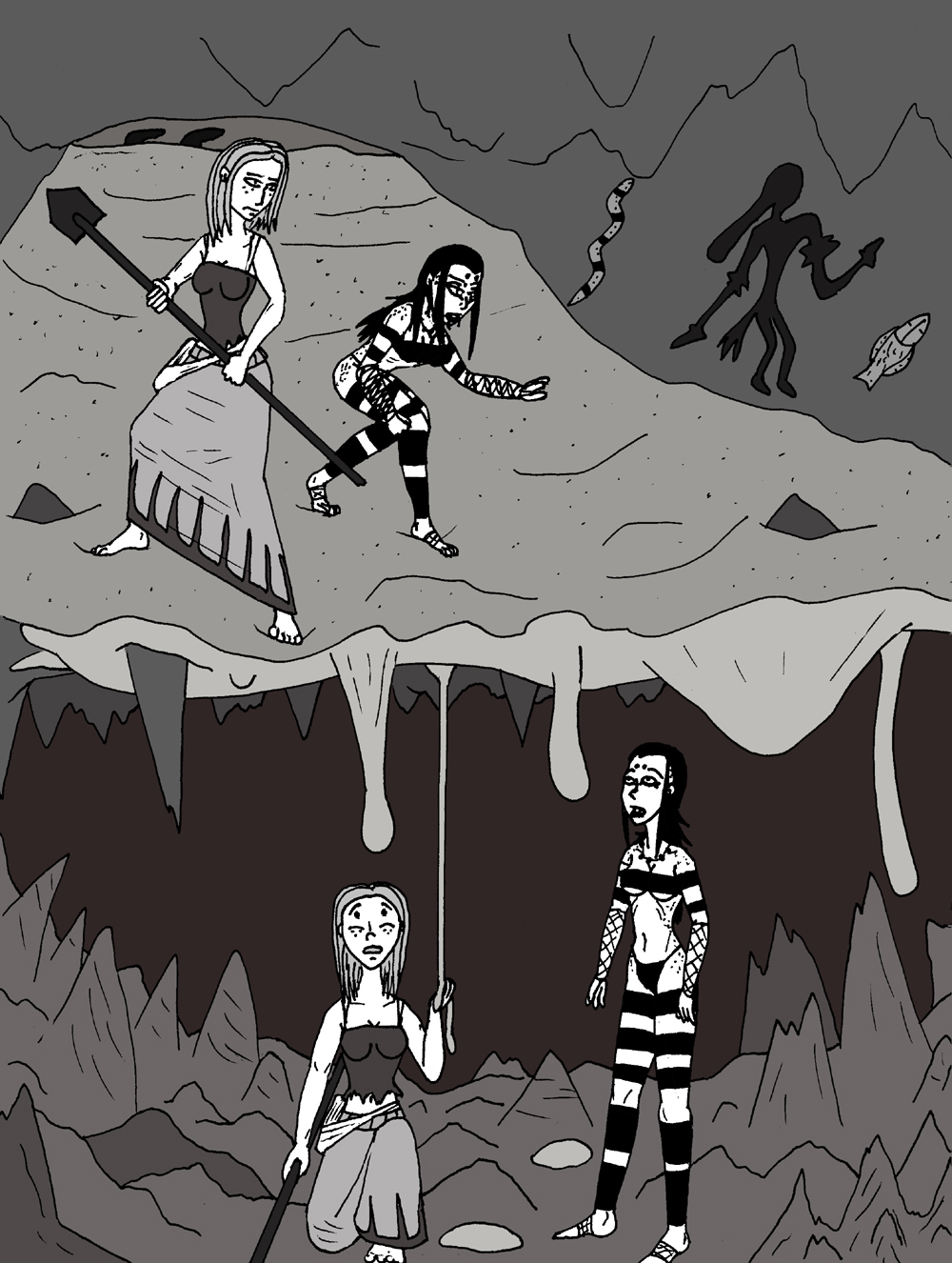 Bali-la and Karolina crawled into the entrance of the cavern, revealing a descending slope consisting of a sandy berm which lead into a progressively more pointed series of stalagmites and a stony floor. The Longtooth guards above watched them enter before fading from sight, content only to leave their positions should the two return successfully. As they entered, Bali-la seemed no less at home here than she was above, while Karolina tightened her grip on her spade, as she often did when nervous.

Caves were not something the hunters or her parents in Adelaide mentioned much, only that they generally weren't safe to enter and it was easy to get lost in them. For the witch, it felt strange to be in such a natural enclosure, divorced from ever seeing a sky. And the idea of becoming lost down here was not a comforting one, perhaps more so than wandering without direction above. Did Bali know what she was doing?

Bali crouch walked as they made their way down the slope, seemingly on guard. "You know, I think those Longtooths could have made it in here if they really wanted to. All this sand would be in their ability to dig through and I imagine they could fit if they entered in animal form. Some of them must be able to shape shift like that, it's certainly common enough."

"That's true. Still, I don't think a modest excursion down here would destroy them. And it doesn't even look like they tried."

"Something else is keeping them out?"

"Maybe. Nothing that lives exists without fear at some point. Let's be careful and stick together. It's easy to get seperated in a place like this. The shadows have a way of displacing people if they stray too far in an unfamiliar location."

Soon, Karolina noticed some cave art. It looked to be made with chalks and other staining minerals. There was a simplistic series of pictures involving a humanoid of some sort, a fish, and a snake. "Interesting. Are these Xibalban?"

Bali glanced them over for but a moment. "No, not likely. Given the style, they're more the works of the Aboriginal peoples from your neck of the woods. Although these might have been painted a long time ago. That said, let's stay focused. Anything could be down here. Caves are hotbeds for trouble."

Before long, the sand ended and the two found themselves solidly in a valley of stone monuments, pointed both down and above. The floor was cool and they could hear the sound of dripping water. Their very footsteps echoed with soft pitter patters and although the two could naturally see in the gloom, it was darker down here still.

Some ten minutes into their journey, something wet and viscous touched Karolina's shoulder. She made a subdued 'eep' noise and looked to the source. There was a long slick string of ooze dripping down from above. It was slightly sticky and yet somehow slippery, like a bar of soap sitting in water. The dripping stuff was amber colored and smelled faintly of sweetness. "Uh, Bali? What is this?"

They looked at the wet string and then glanced up together to find a large swath of amorphous slime dripping down towards them.

When is a large amount of slime in a strange place a good thing?

Admittedly, I can't think of one off the top of my head.