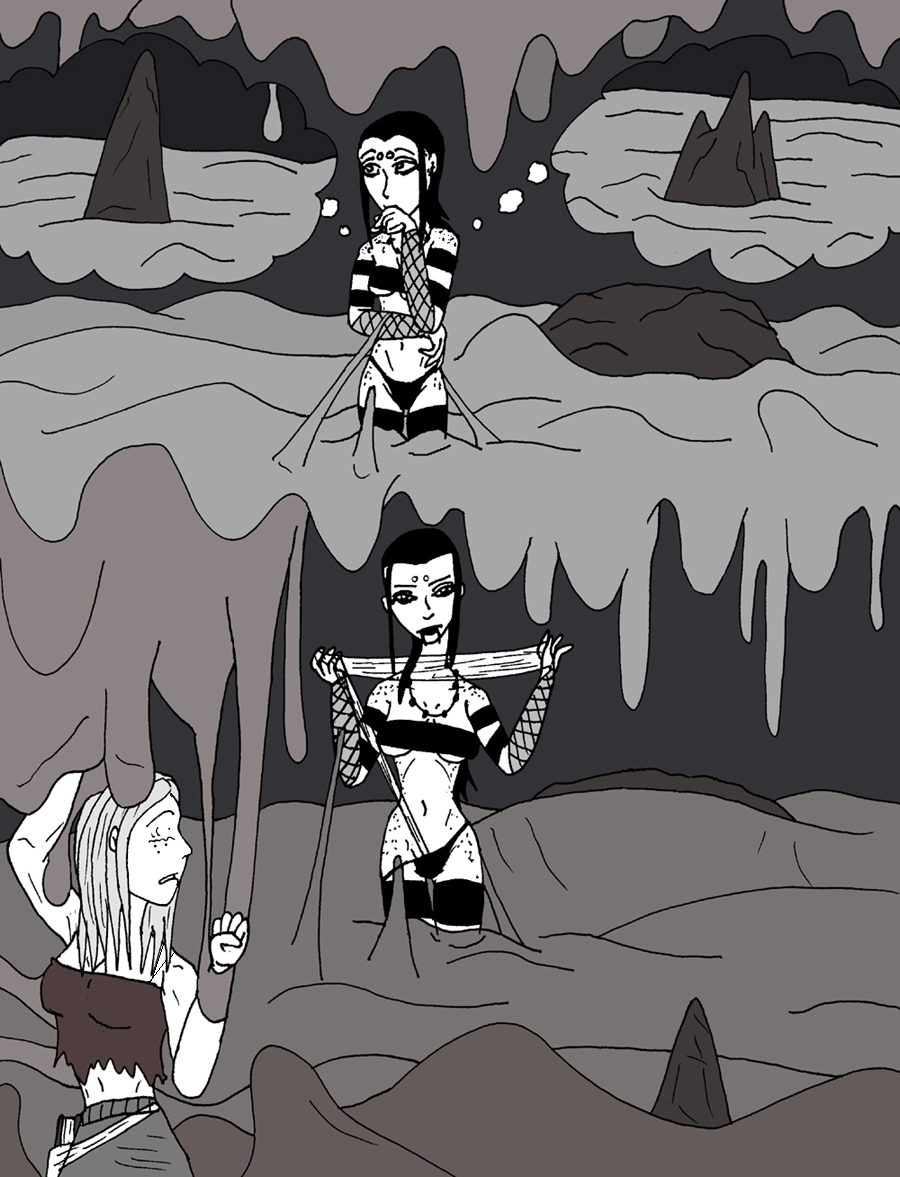 In many ways, the situation was a mess. Bali-la glanced back and forth, remaining cool headed, examining what options were available. As the muck bubbled and slurped at the two, it didn't seem like there was much avail. She could move a bit within the ooze, but it seemed to pull at her if she actively tried to leave it. It was possessed of a slow stubborn motion and was strong enough to at least hold them within itself. So there was time to do something and it was only a matter of what.

Looking to Karolina, the girl flailed and cursed as the sticky sludge slowly dripped down on her from the stony ceiling. Bali wasn't counting on the witch to come up with a solution, at least based on what she knew of her. And the Xibalban considered it her personal purpose to get them out of this anyway. It was an alpha's obligation to her companions to look after them when they could not, whenever possible. That's how Bali saw it anyway. She had known some who took up the mantle of leader and were lacking for it. One's status as leader was empty if one couldn't fulfill it, or so she was known to argue.

Getting back to the slime, time was running out. She knew she couldn't fight the stuff. It was formless, mindless, and probably didn't have any weak spots that she could exploit. She wasn't even sure what it was. Plant? Some animalistic cell colony? A fungus? It was unknown to her. There were many monsters and hazards in Xibalba- running afoul of a creature or a trap was very common, bordering on daily within the wilderness and caves that dotted the land. With that in mind, it was the mark of a survivor to continue on through the world despite setbacks and danger. Surviving was no foreign experience to her and she told herself this would be no different.

So what to do? Her surroundings had precious little to work with. Just the slime and a few pointed stones protruding from the much. And so, realizing she couldn't fight it and couldn't simply walk out of it, it was time to take a chance.

As a member of the spidery Death Clan, Bali-la was naturally gifted with befitting arachnid talents. Venomous fangs. Climbing walls. And of course, weaving silk. On her body, her spinneret glands were located in a place that made humans feel awkward and uncomfortable usually. It was a tiresome notion of many of the surviving humans in Xibalba, but they were still rather judgemental about anyone who didn't quite look as they did. Bali-la didn't dislike them by any means, but she knew Karolina was more than a little confused about where and how Bali spun that web in the light house when she wasn't looking. Until now, Bali had been intentionally discreet.

So it was only too fitting that when Bali slid down one side of her leathery black thong and drew forth webbing with her fingers, the shovel witch happened to be looking back for advice when she saw Bali produce her silk in a very vulgar looking way, as if sexually touching herself. Or at least, it certainly appeared as though Bali was drawing forth her webbing vaginally, as the skimpy underwear did still cover her a bit and the exact details were a bit hard to discern at the time. "Wha-? What are you doing?!" the witch stammered out, as she distractedly wrestled with the falling slime. "That's where it comes from??"

Bali sighed, not making direct eye contact. She hoped Karolina would get passed a sight like this at some point, because she didn't intend to stop for her sake. Weaving was part of her at an integral level. "My spinnerets are just ABOVE what you think you're seeing," she insisted, with the implication she found the inquiry to be tedious. There had been a few times someone questioned her about it, but it was how she was made and it was normal enough amongst her own kind. Some of them, of course, actually did create webbing more directly from their nether regions. They were built to be akin to spiders, not human era superheroes with convenient family friendly powers.

"And as for what I'm doing, I'm getting us out of here. Get ready, Kara. This one is going to be a little rough..." she promised.

The shovel witch swallowed hard. She had no idea what Bali was up to and she was still trying to handle the sight of how Bali made spider webs. But in the long run, she knew anything her friend was up to had to be better than being slowly eaten by the wet slick slime that held them close.