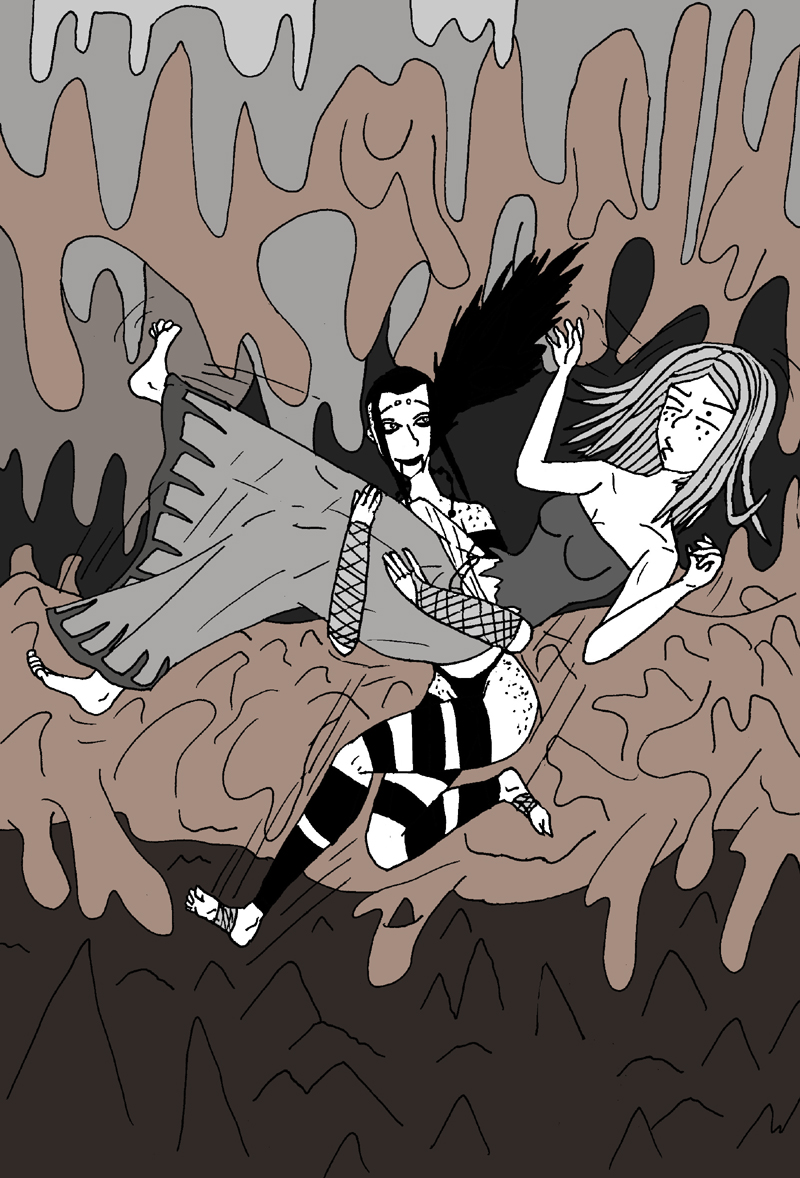 Bali pushed back on the web cord with a slow steady level of force, using the slime's own viscosity to keep a controlled pace. And then, aiming herself at the shovel witch, Bali quickly raised her legs all at once, removing the effective brakes that allowed her and the line to remain further back. The cord's tension was physically driven to straighten out again, as Bali's own weight was not enough to hold it back any further.

She had done this before, although mainly because it was fun to do and not out of any preparation for a situation like this. Still, the tactic worked amazingly well. As the slime mass didn't seem to realize anything was wrong in time, as it mainly concentrated on descending down from the ceiling upon the prey, it suddenly found one of the victims was not only free of itself, but quickly made off with the other. It tried to raise and move pseudopods to intercept them, but the entity was ultimately as slow and apathetic of movement as Bali deduced.

The Xibalban was sling shotted forward and in a mere second, Karoline had only just braced herself when she felt Bali not only slam into her from behind, but immediately scoop her up in the process. The rapid impact jostled the shovel witch, making her lose some of her breath, which also left her momentarily disoriented as she was half aware that she was suddenly flying through the air. It happened so fast that it took Karoline several moments to process it, even though she had a few thoughts on how the strategy was supposed to work. Together, the two were laterally flung just over half a dozen yards to freedom. The ooze collapsed as fast as it could around them, but it was too late. Bali and Karoline escaped and they were not likely to go back for another experience.

Quickly, the two landed on the smooth stony floor away from the slime with an awkward skip, as their legs were still slick with the stuff. Bali crouched down, still holding Karoline, in an effort to control her sliding stop better. And she managed to do so before colliding into any stalagmites.

Setting, Karoline down, Bali stood and stretched her back. "That worked better than I thought it would. Are you alright?"

Karoline, for her sake, was mildly dazed but she soon nodded. "Yes, just a bit shaken up. But wow... I'm amazed you pulled that off." She coughed, getting the air back into her lungs. Bali's body hit with a lot more force than she imagined, as the woman seemed fairly thin. By the look of her, she assumed Bali was relatively soft bodied, but the impact was incredibly solid. And considering how she had been picked up mid-air like that, she developed the opinion that Bali was likely a lot more athletic and strong than she gave her credit for or that her form even showed. But it made sense- the spider woman did live in the wilderness.

"So, take a moment to catch your breath, but we should try to continue before long," said Bali. "We need to find a water source. If not to drink, then to clean up. I don't know about you, but I'm starting to feel a stinging sensation on my legs. That slime is probably corrosive to living things, you know?"

Karoline noticed Bali was right. She could feel it on her arms and legs too, although it was more irritating than painful at the moment. "Alright... that's a good idea. Oh, and... thank you, Bali. I'm not sure what I could have done in that situation on my own," she said with a smile.

Bali grinned and winked. "No problem. I'm your Alpha. And your friend. I will always do my best to protect you."

The two shared a smile together. Karoline nodded to herself. It was good to have a reliable friend like this.