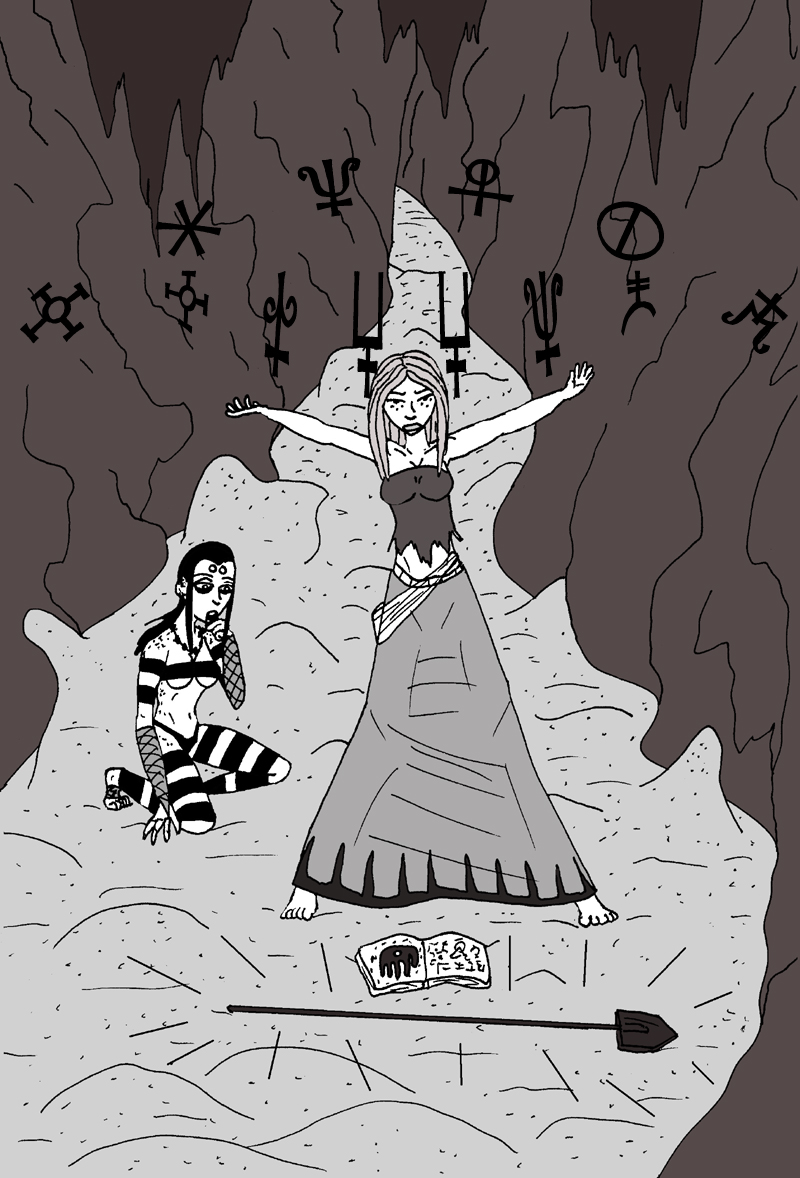 As they searched the depths of the sandy cave for water to clean themselves and remove the stinging residue of the amber jelly, Bali noticed Karolina lost her shovel. "Oh... your spade is gone. I'm sorry," she remarked sheepishly. She rather assumed the shovel was important to the girl. Even in Adelaide, she was never far from it. And after all, she was 'the shovel witch'. "I'll try to find you a new one when we get a chance."

Karolina glanced to Bali, and yet the witch seemed much less bothered by the notion than Bali believed she would be. "Oh, that. I wouldn't worry. Yes, I did drop it back there but I can get it back any time. Honestly, it's one of the few spells I actually know how to do."

Bali was intrigued. What magic DID the shovel witch actually know? So far, she seemed to imply it wasn't much at all.

"If we can take a brief pause, I can attempt to bring it back right now."

"Oh, by all means, Kara. I'm kinda curious to see what you can do. We never really talked about it, with everything going on."

Karolina shared a reluctant smile. "Well, I can't do much. Not competently, anyway. Spells are really complicated, at least, that's how I was shown how to do it." She set down her book and flipped through several pages before letting her fingers rest on a section bearing esoteric symbols. On the adjacent page to those symbols, however, Bali gazed more intently. It was an image of that black hand with an eye in the center of the palm, exactly like the one she saw in Siouxsie Q's mausoleum.

Bali couldn't read whatsoever and she had no comprehension of what any of the sigils meant, but the hand seemed ominous. Almost disconcerting. "Hey, if I may ask, what does that hand print mean?"

"From how I understand it, it's called a Mark of Invoking. My teacher told me that magic of this style requires the image to be present when conducting a ritual using these formulas. In this case, it's the Invocation of Chernobog. I don't know exactly what that references, but it channels the spell's shadow energy through a spirit's realm of influence by that name. I've tried doing this kind of spell without having it present in some form and nothing happens."

"Chernobog..." Bali repeated quietly. "So, it's kind of a password or lock and key symbol?"

"Yes, exactly," acknowledged the witch. "I suppose it keeps accidental spells from being cast by someone who has no idea what they're doing. Any ritual magic I perform from the spells in this book, MUST have the Mark present. The bigger the spell, the bigger the Mark needs to be. For what I'm about to do, having this page open in the book is enough."

"And for something presumably bigger and more complicated, like Siouxsie's resurrection..." Bali recalled with weighted words.

Karolina bowed her head a bit, sighing. "Yes, you understand it. Of course, that's just one part of things. Some spells don't require the Mark of Invocation, but they're not rituals. To explain the difference, ritual magic is largely complex to recite and laborious to perform. It takes time and concentration. Not something I could have done when we were being attacked."

"Interesting. So this ritual you're about to do will bring back your shovel?"

"Right. I'm not really that good with magick yet, but I practiced a few of the more basic spells. Basically, I know how to summon my shovel back and I know another ritual where I can strengthen it so it won't break easily. Mm... beyond that, the only non-ritual spell I can competently do, is used to repel geists. All three of those spells made the most sense to me, considering where I worked all this time. They're were, uh, also relatively simple to learn."

"Sounds practical at least!" Bali cheered. "Do all spell books teach that sort of thing?"

"No, not from what I heard," said Kara, shaking her head. "I received mine in a ritual from my teacher at the time, but I believe spell books are generally personalized by an unknown force as part of the ceremony. It's hard to really explain, but I think this book is supposed to contain spells that would speak to me as a person."

"Huh. I think that adds a new meaning to the whole 'grave digger first, witch second', eh? Well, we might as well get started. I'll watch your back and let you do your own thing."

"Sounds good. Just give me a little room."

Karolina took a strong stance, as Bali crouched down nearby, still eyeing the book and the hand marking. The shovel witch then entered a trance-like focus after several moments of adjusting her footing and breathing. Raising her hands and making deliberate subtle gestures, Karolina began to chant unknown words with growing confidence. To Bali, it resembled a performance, something she found interesting as a courtesean. It reminded her much of dancing and singing, two activities she was very fond of.

In a few minutes, Karolina's shovel miraculously began to appear near the book. It was definitely the same shovel, as the metal was still greasy with amber jelly slime. And before five minutes had passed, the shovel had grown from translucent to solid and intact. With that, Karolina eased her posed, released a controlled breath and began to relax. "Whew... ritual magic is exhausting. But hey, there it is! That's all it takes. Agh... it's all slick and gross. I'm gonna wipe it off in the sand." She crouched down and began to preen her implement in the silicates by her feet.

Although Bali was impressed, she couldn't shake a disconcerted feeling following what she heard. And the more she thought about it, the less comfortable she grew.

There were many forms of shadow and gloom that commanded almost all things in Xibalba. Shadowmen and geists were living embodiments of darkness. It was a form of all existing energy in and of itself. It contained both secrets and potential. But some shadows were darker than others. And while she couldn't put her yellowy finger on it, there was a vibe of ancient darkness in Kara's magick, the kind that Bali deeply wanted to forget about. And here it was, being used as a common tool by an otherwise innocent young woman with a tragic history.

Bali-la stood and composed herself quietly. "We should continue." A small bead of cold sweat ran down her brow, hidden behind her mandible-like bangs.

"Okay!" smiled Karolina, gripping her shovel happily as if rejoicing with a beloved pet.

"If you have any questions, please feel free to contact me at any time.".

Because it looked like it might well be a real language I typed the "spell" into google translate.

One guess what the result was.

It's a Wingdings style font but the letters are keyed to a specific phrase, actually. If you check the story text itself, all her spells actually have a very simplistic rule to them when put together- look at the first letter of each spell word she's pronouncing.