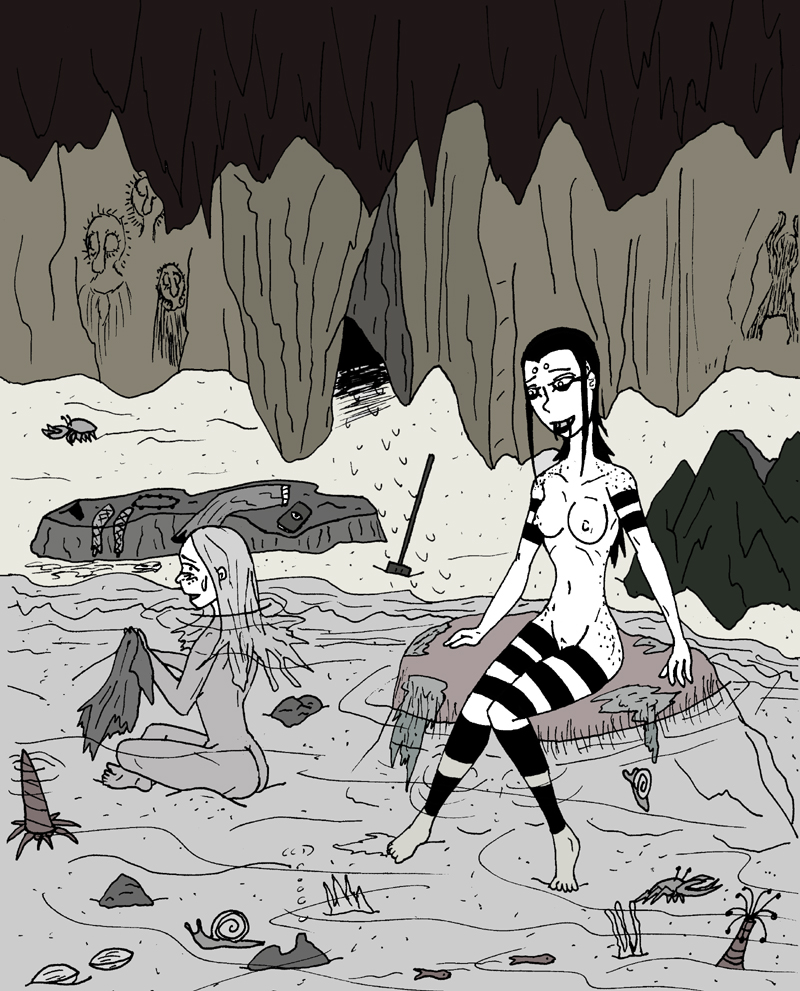 Letting on nothing about her vibe over Karolina's magick, Bali tried to focus on the more immediate goals on hand. So far, there had been no trace of Saiya, if she was even alive. There was every possibility that the amber jelly brought Saiya to her end and there would be no trace of the Ophidian. Bali could only hope that wasn't the case. If they could even find some proof one way or another, that would at least be something. And all of this was assuming Rathalos didn't send them here with the intentions of some convoluted death trap. But the more Bali considered that one, now that the heat of the slime attack had passed, it felt less likely. His story was too detailed and surely, the Longtooths could have killed them without doing so indirectly. Bali didn't know them for their subtlety.

Their other interest, of course, was water. She was certain the cave had some within it. The caves were warm, but not as hot as the surface world was. There was humidity in the air, and Bali felt it must have risen from some depth within the sandy passages. Further, she doubted the amber jelly could have survived for long without a constant flow of moisture in the air, too.

There was also an increasing issue of needing to rest. They had eaten little, traveled much, and drank essentially nothing in all this time. It was almost hard to imagine that they had set out from the cemetery light house on this very same waking day.

Karolina was holding up surprisingly well by Bali's standards. Quietly, the Xibalban respected that. The witch, while visibly not the most confident person, hadn't complained in any meaningful way about the whole slime attack. She did her best to keep it together when they were captured. And the land outside of Adelaide had only fascinated her so far. She was tougher and more adaptive than Bali initially guessed. An admirable set of qualities for an isolated human, Bali reflected as they trekked down sand filled tunnels. She was probably raised quite well.

Not only was Bali feeling respect for the young woman's quiet strengths, but it allayed her own conscience. She did not enjoy the thought of endangering a companion because of her own errors, particularly one so inexperienced in the greater world. The abduction by the crocodile people was particularly shameful for Bali- she was usually quite aware of her surroundings. That she detected Siouxsie far below her in a mausoleum during a rainstorm was testament to that. But the Longtooths had simply laid silent, camouflaged with their environment. For Bali's unique sensing, there was less to work with. The jelly was no different, in many ways.

"Bali? Are you alright? You've been quiet," asked Karolina out of the blue, snapping Bali-la from her musing.

"Huh? Oh yes, I'm fine." There was a brief pause. Both of them could sense each other's slight discomfort.

"Look, uh... the magick..." Karolina stammered slowly. "Does it bother you? Because I know you said some Xibalbans might respect it. But my teacher also suggested that people wouldn't take it so well. Witchcraft has some negative connotations, and all."

Bali blinked and took a moment to consider her words. She turned to face Karolina, who had been following behind her since the ritual. "Oh, don't worry about it. Witchcraft doesn't have any bad meaning to Xibalbans. As a whole, we do respect someone who can cast spells usually."

"Usually? Alright. But what about here and now? And you? I want to know if it bothers you," said the shovel witch with unusual assertiveness. Karolina didn't seem angry, only serious.

"I don't have an issue with magic, Kara. Or you practicing it. It's part of who you are. And I do support you in learning more about it. Remember, I suggested bringing your spellbook along?"

Karolina chuckled awkwardly. "Oh yes, that's true. Ha ha..." She had forgotten. But she was glad she did bring it. Summoning the shovel back without it, while not something that needed to be done often, would have been more difficult. She knew she didn't prioritize the importance of the tome as much as she should have.

"I guess... have you ever had any weird feelings from it? Maybe the whole practicing of magick made you feel different or had you doing something you wouldn't normally do?"

Karolina's eyes searched. "Well, no, not really. Unless you count the whole screwed up resurrection ritual. I mean, sure, the book had strange symbols in it and I don't fully understand even half of it... but I kind of consider it like a cook book, you know?"

"Yep. I just see all those magical formulas like recipes. I'm just a lousy cook, is all. Ha ha ha..." It was nervous laughter once more.

Bali smiled softly. "I see what you mean. Okay. I was just wondering. I thought some of what you were doing was rather interesting, really. It reminded me of a performance, filled with chanting and dancing. I can tell you I'm all about that, Kara! Ha ha. I guess... just promise me one thing?"

"If... if the magic that book holds tries to make you something you're not... you'll stop using it, okay?"

Karolina was slow to respond, processing the request. "Do you think it has that potential?"

The Xibalban shrugged. "I don't know. Just never forget who is the tool and who is the master that wields the tool. Magick is vast. Mmm... I should probably say this, but I think you've got a lot of potential to be whoever and whatever you want to be, Kara. You're a tough cookie, as they say. I had a good feeling about you when we met. And I trust my instincts when it comes to other people. I'm happy that you're joining me on this misadventure. The road gets lonely sometimes."

Hearing that, Karolina absolutely beamed. Looking and feeling humbled, she rubbed the back of her head and kicked a little sand as she averted her gaze. "Aw... that's so sweet. Thank you, Bali." The shovel witch felt like she could fly by sheer joy. Being warmly complimented by an experienced survivalist like Bali-la? It made the entire day feel worth it. "Sorry to question you like that. And yes, I'll swim out of the deep end if I get the impression all this magick is corrupting me somehow. You'd tell me too, right?"

"Absolutely," Bali said, slapping Karolina playfully on the shoulder. "I've got your back."

The two nodded at each other with respect. Part of Karolina wanted to give her a hug for the unexpected reinforcement and morale, but she couldn't work up the confidence to impose. And unbeknownst to her, Bali thought to do the same, but considered that maybe Karolina would find it too forward. For all their time together so far, it hadn't actually been that long.

With a wistful sigh, Bali motioned to continue on, and the duo sauntered further down the winding sandy road within the cave.

After an hour, the two had many several turns as splits and forks began to commonly appear in their journey. Bali would study each passage briefly, as if sensing something Karolina didn't perceive. But the shovel witch remained quiet, content that Bali knew what she was doing or was at least making educated guesses. She felt no need to question her 'Alpha' at this time. Having faith in someone else was still an unused foreign concept for Kara, but it didn't feel wrong either. Giving Bali-la her confidence was akin to strengthening an unworked muscle, but she would do her best.

Soon enough, the two exited the maze of stone and sand. They arrived at a shallow underground creek, visibly no deeper than one's thighs in most places. It teemed with small fish, gastropods, and other water dependent fauna. It was a welcome sight, indeed.

Savoring it for a moment, Bali approached closer and briefly brought a taste of the water to her lips as she crouched down. "It's fresh. Clean, too. Kara, what say we make camp here for the day? There's no sense in pushing on further after all we've done."

Sighing happily and feeling the strain and exhaustion creeping up, Karolina smiled. "I'm all for that! I wanna dunk my head in it!" She buried the head of her spade in the sandy embankment and placed her book on a large flat rock near the creek.

"I could certainly use a drink. And... I hope you don't mind, but I could really use a bath. It's been a very long day."

"Yeah, me- oh, you do? Of course. Should I wait over here?" Karolina gestured to a nearby fold along the adjacent tunnel wall, which was adorned with more cave art of the indigenous Aboriginal people of Australia.

Bali snerked. "You can face away from me, if you want, Kara. Honestly, it's not a big deal. Maybe it is for humans, but we're pretty communal about ourselves," Bali said in reference to Xibalbans as a whole. Or perhaps just the spider clan she was part of.

Bali chuckled again. Humans had some funny hang ups, sometimes. And their reactions often had a way of saying "I want to, but I'm afraid to." She found it sort of charming. And Kara was full of responses like that. She had definitely been raised tough, but without feeling entirely comfortable in her own skin.

With great relaxation, Bali pulled up her bandeau, slid off her thong and armlet wrappings and dunked them in the water, rinsing them of sweat, dirt, and sand.

Karolina stared for a moment, observing the nude Xibalban. She didn't know what to say or what to even think. There, Bali stood like some naked jaybird. Karolina realized she hadn't seen an actual living person without clothes on in what seemed like forever, save for the Longtooths who didn't seem to have any visible gender traits to begin with. Bali, however, despite her sandy yellow toned skin, was built much like Karolina herself. And she seemed to be entirely comfortable, despite being stared at. Kara could even see the spinneret Bali-la had alluded to. It was exactly where she suggested it would be.

Bali smirked, shook her head, and resumed washing what amounted to her clothing.

Feeling dazed, as if in some weird dream, Karolina took a deep breath and sat in the water not far from Bali. It felt wonderful and she was reminded of her many aches and pains from traveling. "Oh, that's damn good... unh," sighed the witch. Taking several minutes to simply enjoy cool water, she slowly began to undress, keeping her back to Bali. And like the Xibalban, she began to wash her attire in the creek while nude.

Soon, Bali was done cleaning. She laid her clothing on the rock near Karolina's spell book and stretched. Then she walked back to a low lichen covered boulder in the creek, which just barely breached the water's surface. She sat down and let her shins splash in the oncoming water flow.

"It's not so bad, is it?" Bali asked with a hint of playfulness.

"N-no, not really." The shovel witch sat in water up to her neck, letting her now soaked hair splay in the current. She kept her back to the Xibalban, but occasionally peered behind her. She had to admit, the Xibalban's body was beautiful, like some lithe athlete covered in stripes and spots. It felt confusing to think that of her, Kara noted, but she was so out of her element that she couldn't think deeply at the time. Her companion was like some living piece of art. And comparatively, she was so... plain?