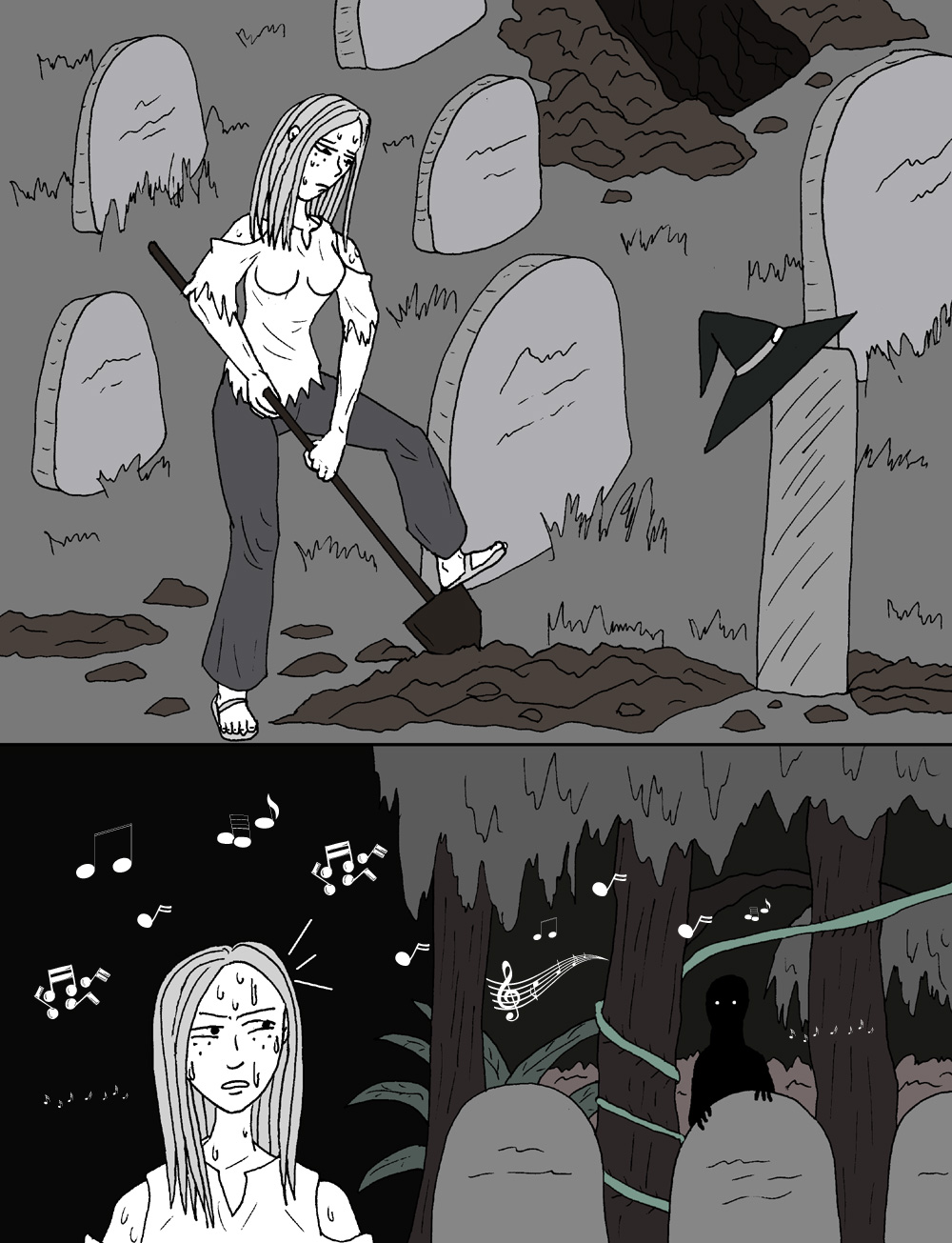 In truth, she had many reasons for why she dug up the earth to inter the dead. Many, many reasons. First of which, her immediate family had consisted of grave diggers for Adelaide in its prime and she had simply been taught the family practice. It was tough, grueling work. And of course, the dead had been thankless in their repose. But it had to be done.

After things had fallen apart and only she remained from her village, the routine itself gave her a sense of solace. The purpose of her work had allowed her a certain respite from the madness of the Xibalban environment. It was willing tunnel vision, surely, but it allowed her to concentrate on something other than lamenting her dead parents. Indeed... burying them had given her a small measure of closure. Once they were at rest, she found it hard to stop as she picked through the rubble of Adelaide beyond the graveyard. Wasn't everyone's death a tragedy, even if she barely knew them? Maybe, maybe not, but they deserved respect too. She wanted to believe that.

She had also been warned of shadow people; said to be the dark ghostly spirits of the deceased. They appeared thin, like a sheet or a piece of paper, and had been known to rob people of their lives through some strange metaphysical infection that converted those touched into more shadow people. They were enigmatic and terrifying, much like everything else seemed to be. Burying the dead, it was thought, would soothe a troubled spirit. She didn't know if it was true or not, but there was no shortage of things to keep her nerves on edge, now that she was utterly alone.

But mistakes had been made once she had been given the title of 'Shovel Witch'. Things she could not easily forgive herself for. That was a whole other story entirely, but suffice to say, the act of giving respect to the dead felt like earning forgiveness for her foolishness. She held herself to be a grave digger first and foremost- anything magical was a distant second.

In her often robotic state of living, which consisted of scavenging for roots and berries when not working, she begrudgingly allowed herself a few moments of lucidity, free from the self imposed numbness of her life. These were often spent in paranoia, watching the tree line outside of town with great wariness. It was there, in the swampy terrain that surrounded Adelaide almost without end, that other creatures roamed.

Usually, they were animals, often twisted into monstrous or giant forms by the inhuman world. Sometimes, she thought she spied upon a shadow person, but it would vanish, as if only the trick of her eye. And then there was always the possibility of Xibalbans, the verminous barbarian tribes people. Many of them were quite willing to prey on humans. They were said to be motivated variously... sometimes out of vampiric blood thirst or hunger for actual human flesh. Other times, they looked to fulfill a peculiar interest in codified dominance, forcing others to serve them for a time. And not that she ever knew anyone who experienced it, but they could be driven simply for sex, for Xibalbans were said to be shape shifters who often wore human-like forms.

They were bizarre, strong, and worrisome. Whereas the beasts of the field would still mainly act as animals no matter how warped, the Xibalbans were intelligent and had their own alien behaviors. Of course, she only knew so much. She had never gone far beyond the borders of Adelaide in all her twenty two years. Much of what she knew was simply passed on by her parents and even they could take the rumors of a third party, only to insist that they were facts.

So often she watched, that it caught her by surprise that one fateful day when she failed to spot the visitor who observed her from the gloom of the adjacent swamp. Indeed, the guest made no serious attempt to hide, but announced herself in song, filled with exotic and soothing notes. It was warm, beautiful, and friendly.

Karolina, ironically, was even more on guard as she turned to locate the unexpected singing visitor. Was it friend or foe?

Glad you are back with more work

It's good to be back, Jerrie.

Jeez. The dank dark. Ominous figures singing sweetly. Friend or foe. Both are known to lure with sweetness.