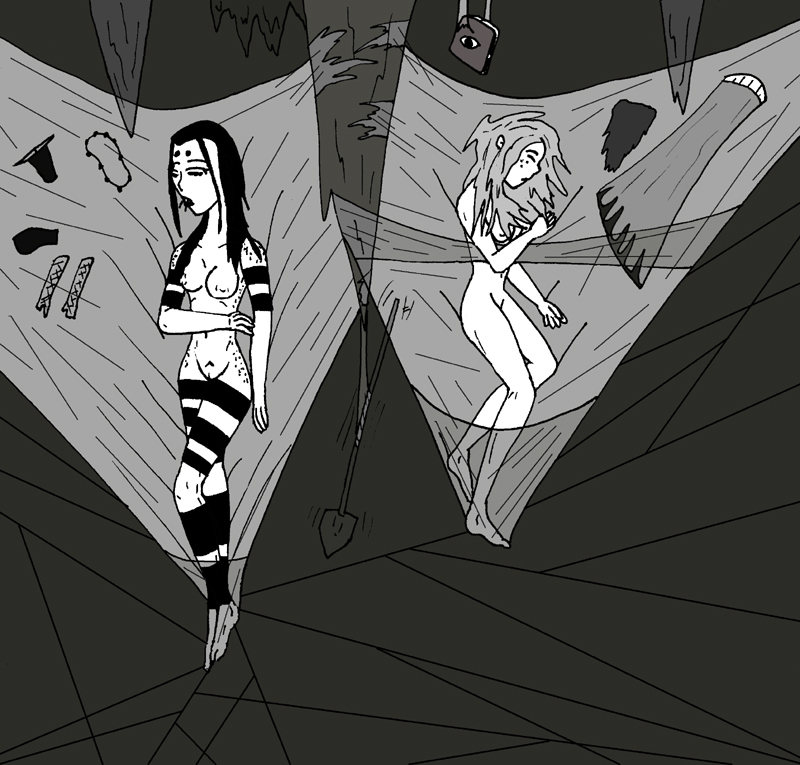 Karolina let the matter die before long with a resigned sigh, never revealing her envy or admiration. While she didn't feel as beautiful as Bali-la seemed to be, she wasn't particularly prone to vanity either. In her growing years, she spent remarkably little time in friendship or rivalry with any of the local girls from Adelaide. As there was always work to do and her occupation's reputation left her estranged from her immediate female peers, she never picked up on their cosmetic interests and competitiveness over appearance. And in this particular case, it was easy to let the concern drop in favor of succumbing to growing restfulness and knowing that Bali was from an entirely different species of being, no matter how humanoid she appeared to be. So for the time, Karolina moved past the tinge of inadequacy, as she didn't feel ugly to begin with and the physical comparison didn't have the relevance to matter.

They two bathed placidly as it dawned on them how utterly tired they were. Hunger was an issue as well, but Karolina couldn't justify eating any creature from the creek raw. She was told in the past about how issues of food poisoning were once lethal, before the shadows following the Herald event infused everything with a certain vitality to survive earthly diseases and ailments. She didn't know much about a time like that, but the the shadows certainly didn't prevent anyone from getting intense stomach cramps from eating bad food either. Having nothing to cook with down here, it seemed there was no chance of dinner. Bali didn't even bring the issue up whatsoever, leaving Karolina to believe the spider woman was possibly a vegetarian, since she had only been seen eating fruit in the past couple of days with those dark colored fangs of her. An apple eating spider? Seemed odd, but then again, everything was colored with that brush.

Once bathing had ended, Karolina let herself drip dry in the warm tunnel air. She wasn't feeling as self conscious at the time as she was before, but she still kept her front facing away from the Xibalban out of reflexive modesty. Bali announced she would set up hammocks for sleep, which would keep the two of them off the ground and considerably safer from wandering nuisances, such as animals. Only, she wanted to know if Karolina was comfortable with the idea, given what the source would be.

The shovel witch shivered for a moment, feeling vulnerable with the idea of sleeping in a spider woman's web. There was a certain imagery about how utterly unsafe that would be- had this been anyone else but Bali suggesting the idea, of course. Still, it was surely an unwarranted fear? She knew Bali was easily capable of supporting them in one such structure, as she reflected to Siouxsie and the Xibalban much earlier in the light house's basement. And Bali's character had nothing to suggest that she would turn on Karolina now, of all times. Additionally, the idea of sleeping off the ground and not dealing whatever vermin lurked around here did sound rather good to her ears.

"I can make that happen," Bali responded, implying she hadn't thought to do so prior. "That's probably for the best. I usually sleep alone, but I don't always have restful slumber. I wouldn't want to accidentally flail an arm out at you, now that I think about it."

She remembered Bali had once mentioned issues with her own sleeping. Maybe she was prone to nightmares? If so, what would a spider woman have bad dreams about?

Karolina nodded. "Alright. Oh, and can it be non-sticky or is that not a possibility? I'm not really clear how that works."

Bali smiled tiredly. "It's a decision I can make. I can do that too, no worries. I'm going to set them up high by the stalactites over here. And then I'm going to spread some lines on the ground, as well. If someone or something comes by, it'll let me know. Do me a favor and gather our things? We're going to take them up with us."

Kara stepped back, appreciative of Bali's rational thinking, as the Xibalban seemed to climb up a relatively sheer stone wall like it was nothing. The shovel witch blinked, marveling at how easy her companion made it seem. From there, she watched a still nude Bali set out anchoring lines from various parts of a nearby wall to the jagged points along the ceiling. Then, she filled with out with a cobweb-like sheet of silk, swathing it about the anchor lines as if setting a bed spread.

And similar to how she scaled up, she was done in mere minutes, before she lowered herself down on a winch-like web cord using her foot and hand. Karolina approached her, holding their clothes, her book, and shovel. She twitched briefly as Bali gently lifted her up with an arm around her bare waist and took them some fifteen feet off the ground. How strong was she to carry her with one free hand and her feet?

Kara was deposited carefully in her own webbed hammock and her non-clothing possessions were secured nearby with web cords. Bali then took her own items (sans the foot wraps, which had unraveled when she removed them for bathing) and retreated nearby to her own web bed.

It was comfortable, if soft to the point of being foreign. Nothing about the silk was adhesive where Karolina lay. And she found Bali was thoughtful enough to leave her with a silken brace she could slip under, so she could not possibly roll off the web while sleeping, although Bali didn't bother with that feature for her own web. There was also a pocketed area in both webs for their feet, probably to help in a related capacity.

"How is it?" asked Bali, as she laid down on her back wearily.

"It's... different. Not bad, though. This... feels kind of nice, really. It's so soft." The web sunk a bit from her weight, but she could feel no weakness in the material. There was no chance of it dropping her below. "I guess I shouldn't look down too much, eh?"

Bali chuckled. "Only if you suffer from vertigo, but I doubt someone who lived in a light house tower would have such an issue. Anyway... if you don't mind, I'm in need of some rest. I'm really quite drowsy. I'm having trouble keeping my eyes open."

"Hey, no arguments from me. I'm feeling pretty sore. And uh, hey... I just wanted to say thanks for everything."

"I know today was filled with all kinds of danger and we traveled a lot, but... it was kind of exciting, really. Thanks for that and for having my back. You stood up for me with the Longtooths and you saved me from that amber gunk thing. I really appreciate that, Bali."

The Xibalban closed her eyes and smiled. "You're welcome, Kara. You have a good rest, okay? We'll be safe here, don't worry."

Karolina stared at the ceiling in the darkness of the sand cave, reflecting on the day's events and how different things had become in but a mere couple of days. She wasn't sure what would happen tomorrow, either. Would they find Saiya? Would they be able to save Siouxsie from the Longtooths? Regardless of the answer, she was happy to have someone like Bali watching out for her. It was going to be an interesting journey, she thought.

Utterly worn out, she gradually shifted onto her side and folded up. Although still nude as Bali, her clothes were also damp and she was too tired to care. They could dry off nearby while she slept. And Bali was no prude, that was obvious. It just didn't seem to matter after sharing a bath with her friend.

Exhausted, Karolina closed her eyes, passing out to the relaxing sound of flowing creek water beneath her.