30. Nure-Onna and the Spider's Web 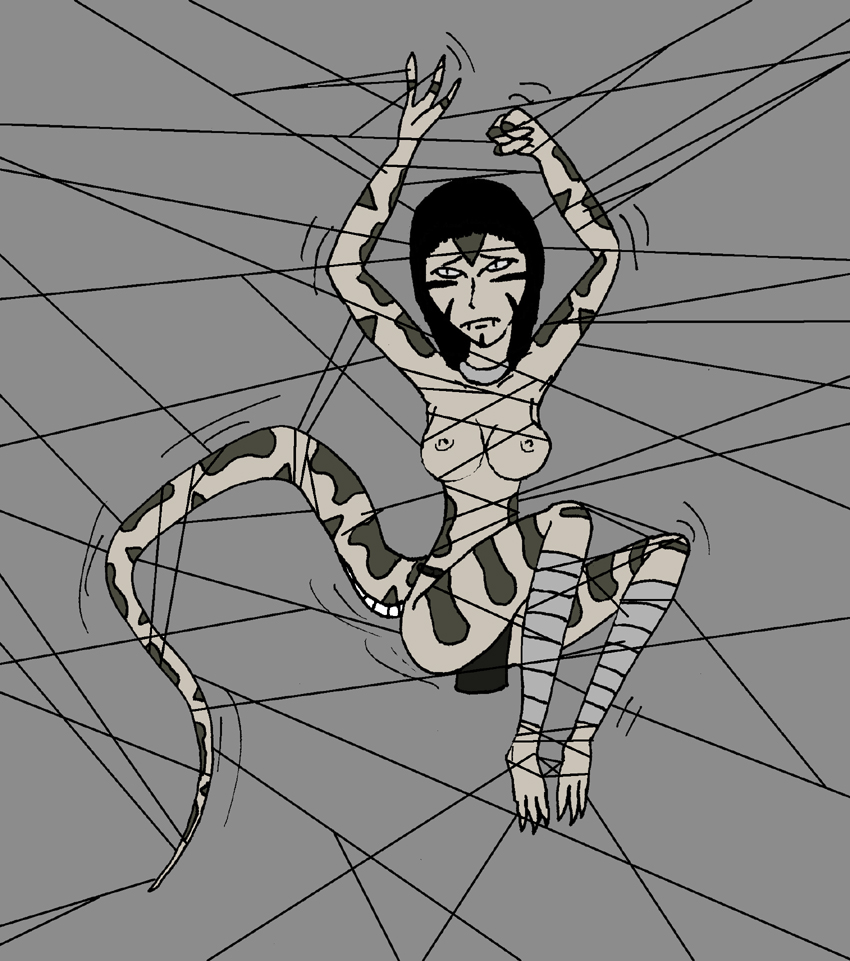 It was a long pleasant sleep, comfortably accommodated on a silken hammock of Bali-la's own making. Karolina rested heavily, free of concerns, aches, and a borderline feeling of being overwhelmed. Regardless, exhaustion makes the best sleeping aid and it was likely not even a bomb blast would have awoken the witch. At least, not for several hours.

When Karolina did stir, it was from Bali shaking her webby hammock. Groggily, Karolina looked at her Xibalban friend, who had since redressed herself since the last time she was aware of anything. "Huh? Bali?"

"Get dressed, Karolina. It seems we had a visitor while we were sleeping," said the Death Clan girl, looking almost annoyingly chipper compared to the human.

Karolina groaned and slowly sat up, her eyes adjusting to the cave's endless shadow. It took her almost half a minute before she processed what Bali said to her. "Wait, what? Are we in danger?! What happened?"

Bali smiled quaintly. "Just get dressed and check it out. I'll leave a rope for you to slide down, okay?"

"Er, um... sure. Be right there." It didn't sound particularly urgent or that they were in trouble. Bali's tone suggested something 'interesting' perhaps. That warranted an extra few minutes, at least.

When Karolina, now dressed and equipped, slid down the silken cord Bali left, she heard two things. One was the running water of the crick that followed the cross way tunnel they stopped next to. Second, there was a persistent low stretching noise, like an old creaking rubber band. It seemed familiar.

Rubbing her eyes, she approached Bali and looked by the water's edge. There, well enmeshed in a tangle of trip-lines and sticky cords, hung a humanoid woman of deep orange flesh and dark splotchy marks upon her skin. She was somewhat more monstrous than Bali, possessed of a long smooth tail, three digits upon her hands and feet, and slivered pupils of yellow.

This person looked at them glumly and perhaps more than a bit uneasy, although she spoke no words. She glanced at Karolina with visible concern, but her attention was clearly focused on Bali-la, whose tripwire-like web she was now stuck in helplessly. She would occasionally strain, pushing or reaching out in one direction or another, trying to break away, but it seemed almost pathetic. Her almost tube-like body would inevitably snap back to where she started, dangling awkwardly, unable to touch the ground. Bali seemed content with the lack of exchange, offering no response, only looking on at her prisoner with a sense of satisfaction. Karolina saw such a thing from her when she watched over Siouxsie that one night, although it seemed more pronounced now.

Observing the captive in closer detail, it was not hard to conclude that this woman had all the aspects of a serpent. Particularly, she seemed to have a mix of patterns about her similar to a corn snake and a Burmese python. Her hair was long and dark, but neater and more straight than Bali's wild mane. Like Bali, she was scarcely clad, wearing only a golden torq around her throat, a fundoshi style loin cloth, and wrapped shin guards.

Curiously, Bali seemed to let the situation to continue to play out, with the spider woman standing proudly as she watched. Karolina didn't quite understand why they weren't... doing anything. The snake woman would continue to periodically struggle with a sad doomed visage, breathing heavily as she did so. Yet, Karolina could feel something unspoken was occurring. There was a vague energy in the air. Perhaps it was something about Xibalbans? Yet whatever it was didn't occur with the Longtooths. Not as far as she could tell anyway. So maybe it was a 'Death Clan thing', but she couldn't tell.

After a few minutes of this, the snake woman seemed to become particularly dour and she stopped struggling, visibly exhausted from fear and expended adrenaline. Bali-la then approached, carrying herself with professionalism suddenly. "Saiya... I presume?"

The snake woman frowned, as if having someone know her name was even worse. "So... you know me? You were looking for me?"

Bali nodded with firmly. "Indeed. I must say, this is a strike of good luck after our last day. You must be skilled or knowledgable to have made it down here. Which makes me wonder how I caught you..."

"Nngh... a certain route was denied to me. So I doubled back here, following the creek to pursue it upstream. I was not of the mind that there was a trap waiting for me since last I came through. And... unfortunately, I cannot seem to extricate myself from your foul silken tethers."

"So... let me guess. The Longtooths summoned you to kill me? I'm to be assassinated now? Or are you going to package me up and deliver me to them?" Saiya postulated with an underlying hiss.

"Hm. Well, let me put it this way, Saiya. In regards to your first question, you're both right and wrong. Rathalos bade me to 'kill' you."

"Rathalos? I don't recognize that name... and what did you mean by that?"

"I'll explain in just a moment. But in regards to Rathalos, I suppose you would better recognize him as Richard Walker."

"From what I understand, yes, although he's more of a Longtooth than the man you might remember. In any event, he wanted me to tell you he apologizes for how his clan treated you and that he's never forgotten you."

Saiya tilted her head. "Then... why are you really here?"

"Officially, the Longtooths want you dead," Bali said, folding her arms casually. "But Richard asked me to effectively just make it seem that I did indeed kill you, in exchange for him helping me out with a friend of ours his clan captured. In other words, we'll be faking your death. All I really need from you is a trophy they'll recognize. I have absolutely no intention of slaying you, Saiya. Frankly, it's just good fortune that I caught you here and now."

The snake woman smiled a bit, breathing a sigh of relief. "I am... grateful. What is your name, spider?"

"Bali-la. Death Clan courtesan," she said politely, smiling as she often did. "It is a pleasure to meet you, despite the circumstances. And this is Karolina, my friend and a human from Adelaide."

"Hello," the witch greeted with a modest bow of her head.

The snake woman seemed to relax in the trap, sensing there was less danger now. "Greetings to both of you. As you know, I'm Saiya of the Ophidian Order. Since we are exchanging caste titles, I suppose it is fair to tell you I'm a 'scout' for my people."

"Ahh, I suspected," grinned Bali. "You were investigating the Longtooths for your people, no?"

Saiya looked bemused but evasive. "That is not far from the truth. Border disputes are common and murky all at once. Well... what say you release me from this web, as we seem to be of the same interests in regards to resolving this issue with that clan."

"In a moment. There are two things we need to address."

"Yes. First, of course, is the matter of what sort of trophy I should bring back to the Longtooths to fake your death? Scales? Hair?"

"Hmm. Perhaps this torq around my neck? They would probably be more inclined to believe you with something quite specific to me. And I know they saw me wearing it."

"And the second order of business?"

"Well... there is the matter of what it will take for me to release you in the first place."

Karolina had been quiet, just focusing on following the intricacies of their conversation which were new and interesting to her. But that last line sounded more than ominous. Was her friend trying to coerce this other Xibalban? It seemed so unlike Bali... although she was gathering her spider friend had some subtle darkness to her. The shovel witch gave Bali a sharp look of concern. "Bali? What are you thinking about here?" She could see Saiya looked visibly less thrilled now.

Bali gave Karolina a coy glance. "Just what comes natural, Kara. I regret to inform you I can't survive for long on just tree fruit. And I didn't want to push my authority on you in this way as an Alpha... I didn't believe you would understand. You're new to our ways and life outside of Adelaide."

Bali contained a sigh, knowing that this was one of many topics that had to be breached at some point. "I'm a spider woman of the Death Clan, Kara. I am not vegetarian. Many of my kind are vampiric, but I am not of that nature either."

Saiya squinted. "Wait... those eyes of yours, Bali. They're... orange? That means... You're not a pure blood Death Clan tribeswoman, are you? You're-"

"I'm afraid not, Saiya. But this is better. I swear, this will not hurt much. Most find it rather... intoxicating."

"Bali?" Karolina called out, lost and confused. "What are the two of you saying?"

Bali breathed in calmly, carrying a vague majesty about her as she approached Saiya. "Orange eyes are the mark of the fae, Karolina. Basically, while I joined the Death Clan, I was born a spider fae. And to thrive, we need to suck out the shadow essence from other living creatures or we'll wither and grow sick. I didn't want to impose on you, Kara. I couldn't bring myself to do it. But I need shadow essence and mere apples won't do the trick. I might not look it, but I'm extremely worn out. I can't put this off much longer."

Bali looked to Karolina, but the girl was unreadable and just cast her gaze down wordlessly. Bali frowned, knowing that it would be hard for an inexperienced human to understand all the unsettling things Xibalbans did, particularly her own clan. But Bali couldn't overlook survival either and as Saiya had been 'defeated', the code of conduct their collective tribes stated to the winner went the spoils.

The Death Clan woman turned back to Saiya, who took a deep breath and nodded slowly. "This is new for me," stated the Ophidian. "Take of my darkness, but spare my life. I won't resist."

Bali slimmed her eyes, fitting that of a predator. "Thank you, Saiya."