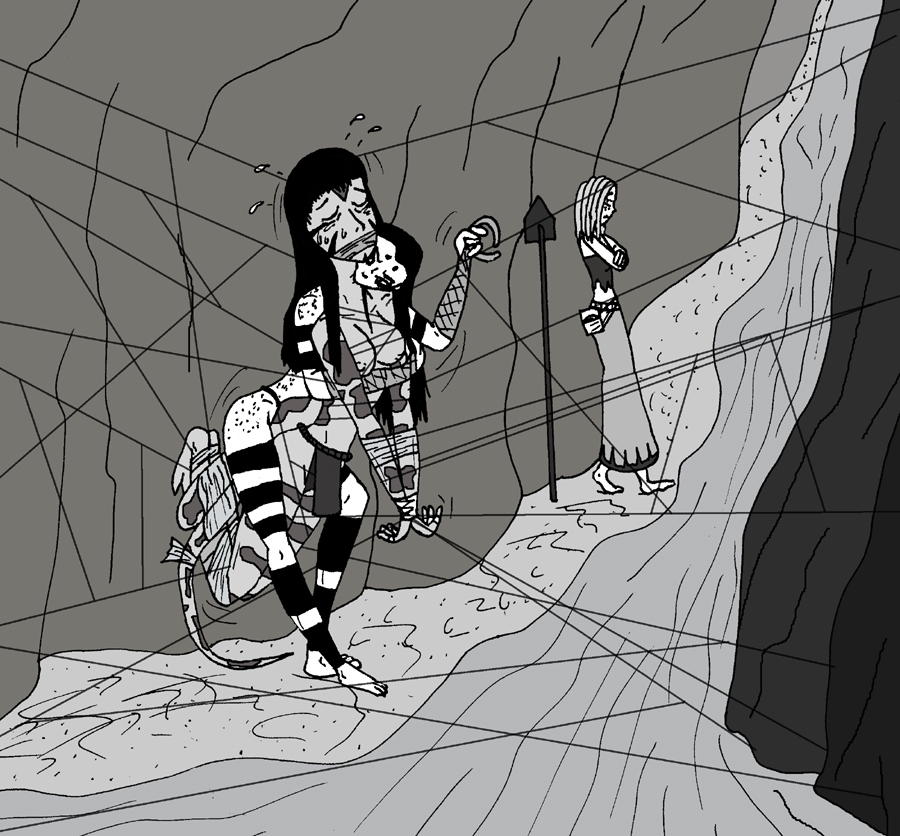 Deftly climbing several silken cords of her own making, Bali loomed over Saiya from behind. The Ophidian bit her bottom lip, wondering how her penalty for freedom would take place. The Death Clan had a well earned reputation for being among the scariest and most unsettling tribe to be captured by, but she had little choice in the matter. Tangled in sticky cords, she had little choice but to accept a fairly merciful exit to her predicament from an utter stranger of a rival group. This was, of course, assuming Bali honored her words. There was no telling with her people.

In moments, finding herself being studied from a stronger position, Saiya found Bali beginning to bind her wrists and shins with new silk. It was wrapped tightly, leaving the snake woman with even less ability to move. "H-hey... is that necessary, Bali-la? I've already surrendered."

"Call it insurance. Some would say I'm reckless. But I'm never truly foolish if I can help it. As such..." Bali drew a swath over Saiya's mouth, sealing her lips shut behind a silken gag. The Ophidian looked more alarmed now, as the spider woman dismantled her ability to speak too. "Don't think I didn't see those fangs. Just in case you had any ideas about biting me back."

"Mmnnnn! Mmmph! Mmmnn!" Saiya protested, wriggling like a fish in a net. The strands stretched, sometimes fraying into more cords from her movement, but they wouldn't release her. Saiya felt increasingly vulnerable, scared the Death Clan woman might truly harm her.

Calmly, Bali then took Saiya's tail and wound it around the Ophidian's legs, after which she bound the coiled tail in place. She straddled over the base of Saiya's tail, practically riding the prisoner and could feel the strength of the muscles Saiya possessed there. All the more reason to make sure she couldn't lash it out or shake Bali loose.

Saiya began to buck and shout into her muffle, making the webbing bounce as she desperately tried to loosen the spider woman's growing power over her. But nothing seemed to work. No movement broke the strands enough and she didn't have anything sharp to cut the webbing with. Bali held and as if ignoring all the protests Saiya presented, she carefully slipped off the metal torq from the snake woman's neck. Saiya felt her throat bared and slowed her struggles to an anxious tremble.

Bali looked at the accessory. The metal was soft and simple in appearance, like that of a giant's nose ring. It would definitely offer some minimal protection to the neck, but she imagined it was likely a trophy Saiya earned or perhaps even something bartered. Xibalbans had many quirks about collecting odd bits and pieces to wear and hoard, regardless of the clan.

"Be brave, Saiya..." she whispered. "As for this moment, you are mine, so try to relax. Forgive the extra bindings, but I take pride in my work and I don't take chances in a situation like this. I suggest you calm down and remember who has mastered you this day."

Still straddling the Ophidian's lower back, Bali enforced a sensation of dominance on her prey, causing Saiya to slowly begin calming down to the inevitable. Gripping the Ophidian with a free arm while the other held the torq, Bali leaned in against that smooth exposed throat, put her black lips to it, and slowly bit into the prisoner.

Saiya groaned, struggling weakly, as she felt a cool sensation enter her neck. Even as a shadow essence feeder, Bali had to poison her prey a little in order to process what she needed, similar to her more commonly blood drinking tribe. The bite stung only for a moment and then...

Kara stood some distance away, feeling distaste at the display. Her new friend was indeed a predator as much as her parents warned Xibalbans to be. Leaning against a wall, Karolina discreetly watched from the side. The sight of Bali preying on this poor girl was difficult to watch, and in many ways, it was simply vile.

The sight reminded her of a time in Adelaide where she found a redback spider had lurked underneath an old chair. A wandering snake, vastly bigger than the spider, had accidentally managed to touch a few strands of the redback's webbing and couldn't slither away from the tether. It tried and tried, but ultimately, the spider eventually crawled down as the snake became weary, where it bit the reptile to death. It eventually packaged up the serpent and began to suck it dry from the head. Seeing Bali-la do this was all too similar.

Kara couldn't put it to words exactly, but it seemed so wrong. Watching the two of them, Bali almost certainly took some horrible perverse joy out of this. She didn't seem like a person anymore, but a frightening spidery monster, who was attacking someone else who was roughly as humanoid as herself. Saiya slowly withered from the venom filling her system, becoming lulled, at times twitching or quietly moaning. There was no escape for her. And perhaps that was half of it- once Bali got you, there was no fighting it. How did anyone fight or escape a spider in their web? It seemed impossible and cheap.

And there was the thought that Bali didn't need to do this, surely? Claims of feeding aside, Saiya seemed perfectly willing to play along with Bali's original need for proof. Wasn't that enough for now?

Karolina sighed. She knew she didn't understand much of anything yet. Shadow essence feeding? She knew from her teacher that shadow essence was a sort of basis for one's magical energy and that it existed in many creatures. But how did one feed on that like some vampire? And what was this business that Bali was a spider fairy? The classifications were getting mystifying. A spider fairy, who was part of the Death Clan, who were part of a bigger grouping of animal-like monstrous people called Xibalbans, which included Saiya... right?

Still... Kara noticed she couldn't stop watching. Why? It was disgusting and weird. The way Bali clutched this Ophidian woman while splayed out over her tied up form... the sounds the captive made... the way bare flesh pressed against barely clothed flesh. The struggling...

Why couldn't she stop staring?