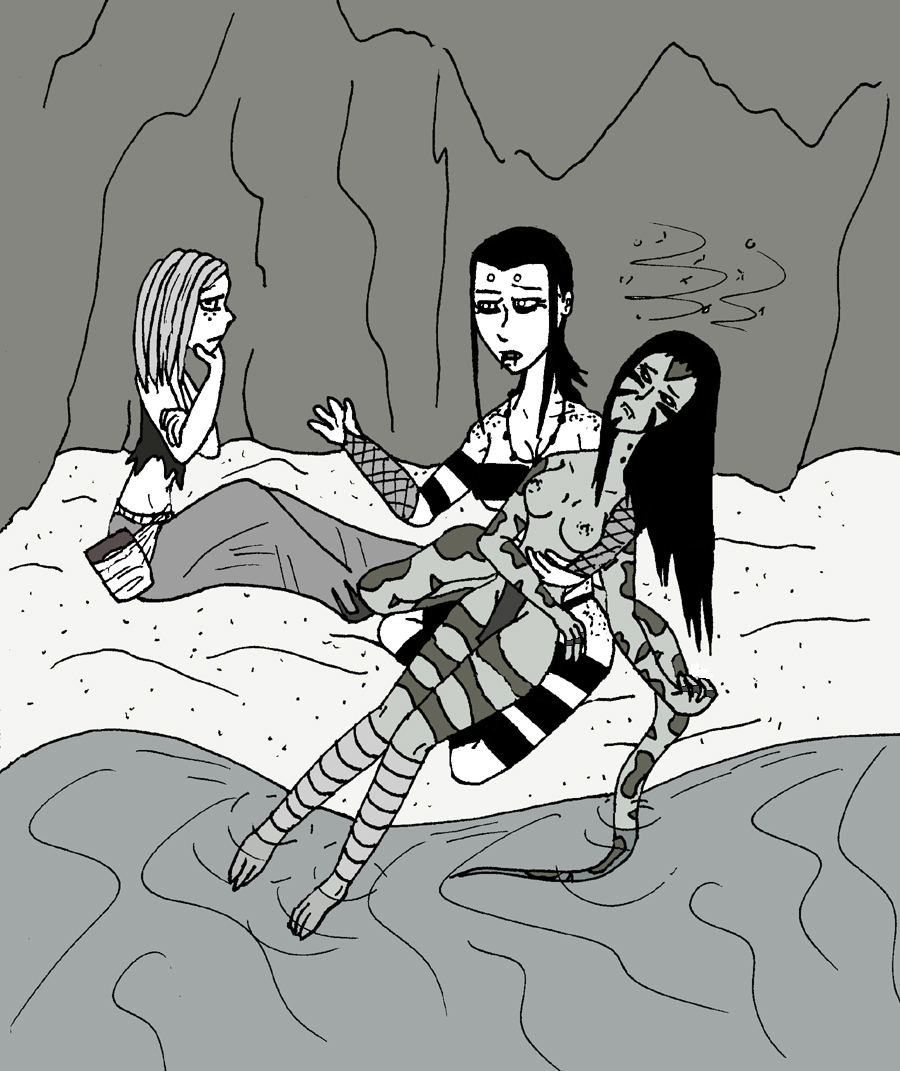 The shovel witch observed, sometimes covering her eyes before giving way to forbidden curiosity... but she didn't interfere. Her thoughts and emotions were conflicting, confused. It wasn't a good state of mind to question Bali, who seemed beyond reproach and unconcerned with anything else around her. And... there was that matter of loyalty to one's Alpha, no? Should she not question the Death Clan woman, she wondered? Or maybe, just not right now? Kara's head felt feverish and her sense of self felt as if it were leaving her body. It was a strange way to begin her morning and more than a little disconcerting. As if a foreign seed entered the soil of her soul, threatening to sprout some esoteric alien plant that wasn't expected to grow in an otherwise fertile garden.

Bali fed on Saiya for nearly ten minutes, as the snake woman moaned and struggled weakly, before she eventually went limp in the spider woman's web, adopting an expression of being lost. She spoke no more words, only making minute utterances and the occasional twitch. Her body and her mind, it seemed, surrendered to Bali's venom and she could fight no more. The spider woman, however, remained taut and rigid in her looming pose over her captive, moving her face and neck only slightly as she drained shadow essence from the Ophidian. She seemed both wicked and lurid, even though she did nothing now out of malice.

When it was done, Bali relaxed, wiped her black lips, and carefully climbed back down the web. Stretching her back for a moment, she then began to release the unmoving Saiya from her restraints, using a peculiar single finger plucking motion to her strands. Karolina didn't understand how exactly that was supposed to work, but it was evident enough that it did. When Saiya was freed from the trap, Bali cradled the captive. Bali sat down and as the Ophidian rested in her lap catatonically, Bali removed her bindings about the wrists, mouth, and ankles.

Despite her predation not long ago, Bali smiled gently and held Saiya in an almost loving manner, quietly singing low soft lyrics composed of unknown syllables. Karolina listened, wondering when she might speak up, but as she heard the song, she felt some of her own stress begin to die down. Maybe... maybe the situation wasn't worth getting worked up over? She wasn't sure.

As Bali sat there as the conqueror with the defeated in her lap, she looked to Karolina with an unsettling business-like expression that the shovel witch had not had much acquaintance with. Bali projected a vibe of existing on the high ground as she gauged Karolina's beleaguered feelings.

After a moment, Bali addressed her first. "So, this bothered you." It wasn't a question, that was certain.

Taking a deep breath, Karolina searched her feelings, shaking her head from side to side subtly. "I... Bali... I have no idea what I'm thinking or feeling right now. Towards you. What you did. What I'm feeling. I'm... I don't know how to react to this. It feels as justified as much as it wasn't. And maybe I didn't... and don't understand you as well as I hoped. Maybe I wanted to believe you didn't casually do something like this to other people. I understand that you have a feeding requirement that is completely alien to me... but it seems like you were doing so much more unnecessarily. And she's not even an enemy, right? I... agh... Bali, I don't want to be a judgemental pest, but what am I supposed to be feeling right now? How should I be taking this?"

Bali looked at her for a long time. Her visage danced back and forth between the serious and the sympathetic. Raising her head slightly, she took in a soft breath. "I'm not human, Kara. I never was. I never will be. I am a spider fairy and I belong to a tribe of diverse arachnid-like people called the Death Clan. You and I... have exceedingly different backgrounds, I'm sure. That is simply how it is. Now, I can't stop you from judging me or my kind. We have rules and methods you will not like. But we both belong in this world, despite what either of our kind may say of the other. We have to live in it together. And as unpleasant and out of left field as this might have seemed... you and I are friends. Are we not?"

Karolina stared and bit her lower lip. "I'd like to think so."

Bali smiled kindly. "Kara, you may feel whatever you need to about me and about this. But know that I'm not likely to stop behaving as I have if a situation like this comes up again in the future. Which it will. And someone might waylay me all the same. As you can see, I have nothing against Saiya. If she was an enemy or something to be tormented, then my instincts would not have me freeing her, let alone keeping watch over her until she recovers. It would not even be a stretch to conscript her to follow me as a servant if I demanded it of her. And unless she could assert herself against me, she would do so. But this is how we function. I must feed. And I have instincts. We all do. You are not going to like all of them, but we don't have your sensibilities anymore than you have ours. I only ask that, as my friend, respect that this is something about me. To do otherwise would be to asked a winged bird not to fly. And I can't live that way."

Continuing, she stated, "And I was being honest with you before. Despite the expectations of how traveling groups of Xibalbans may be with our social norms, I respected the fact that this is all new and frightening to you. And as such, that I would not impose my status as Alpha to suck shadow essence from you. And trust me, you definitely have your fair share." She grinned drolly. "That's something that Xibalbans can sense in others, for the record. You have more than most, probably due to your potential for magick."

It was a lot to take in. And it was hard to separate Bali's dark action from her otherwise sunny personality. But as Karolina thought about it, she could understand what the spider woman told her. Her entire background came from biased terrified parents who shielded and isolated her. Maybe it worked for them, staying close within the borders of town, focusing solely on work. But out here? Was it really worth holding such a banner against the Xibalbans? At least, against Bali? They were friends. That much was clear. But...

"You're right, of course. It's all new to me. It's a lot to take in..." Karolina held her face in her hands, covering a hint of tears.

Bali softened more. "Kara? Oh... are you alright? I didn't mean to offend you... did I speak too harshly?"

Karolina sniffed, still hiding her reddening face. "No, no, nothing like that. I'm just... feeling... a lot of things right now. I'm confused. And I don't know how to react. It's not just about... gods, I don't know what I'm saying here."

The shovel witch looked up at Bali, stifling a need to cry, her face beet red. It was something her parents didn't approve of much in her, so she often learned to conceal it as if she was raised like a boy. There wasn't a lot of room for emotional management in her upbringing. Karolina tried to find words, but she only mouthed emptiness.

Bali took this in, quietly connecting dots. She started to get an idea. It wasn't simply that some lines had been crossed. They had been breached. As a courtesan, she was able to 'cold read' some things in others that weren't said. This was one of those times. And it was not an easy subject. Bali blinked and took in a deep breath. It was time to take things a little slower. "Kara, come here. It's okay."

Sniffling almost childishly, Karolina nodded and walked the short few steps to Bali, sitting down next to her. With her one free arm, Bali wrapped it around Karolina, and the shovel witch buried her face against Bali's freckled shoulder, continuing to stifle her own weeping. Bali gently patted her back, looking sympathetic towards her troubled friend. "Just let it out. We'll stay here as long as it takes, okay? It's alright."