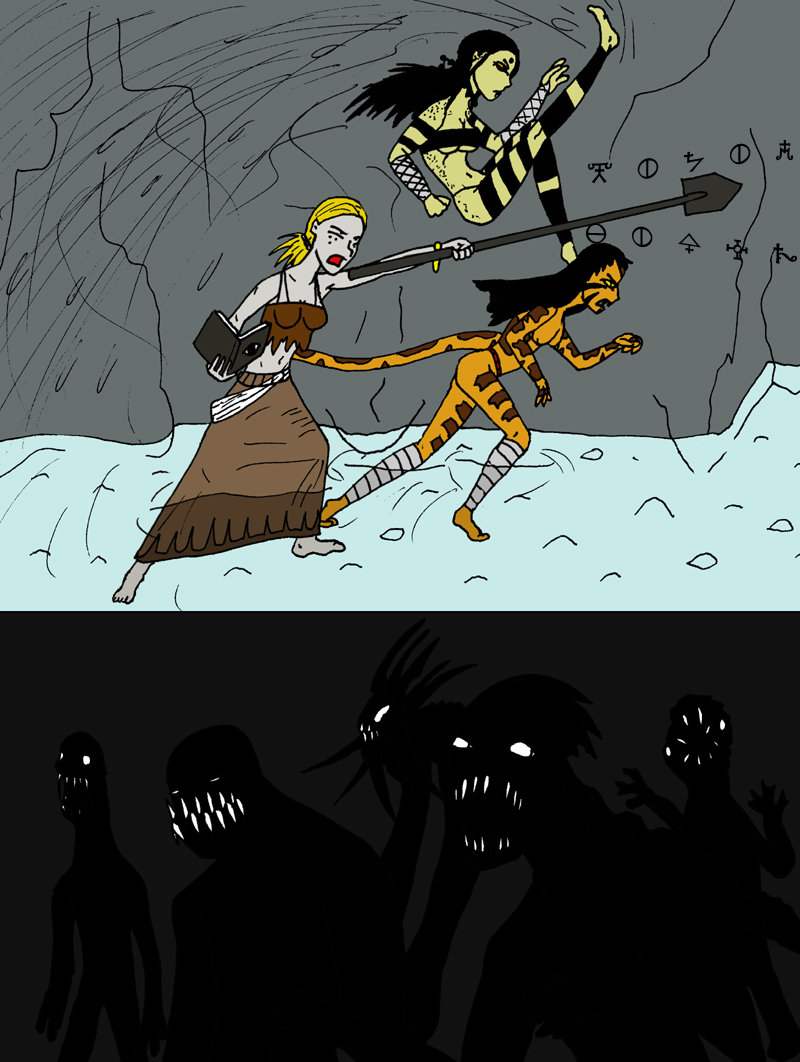 It wasn't long before Karolina could smell the scent of salt water in the air intermixed with musty earth. There was a great deal of moisture in the sandy tunnel and yet, it wasn't terribly humid. It was a balance of something welcome and yet slightly off putting. Still, to encounter salt water was something of a treat. For her entire life, she knew only of limited amounts of fresh water possessed by Adelaide's wells. The briny scent of the sea was something the village's hunters scarcely came back with on their clothes, let alone visited on their treks.

As for swimming, her relationship with the activity was enjoyable, but limited. After watering crops and quenching everyone's thirst, there weren't too many chances to practice. But she had been taught, along with the town's children, due to the possibility of the town flooding during intense storms. After working in the unforgiving sun of Australia, day in, day out, it was more than welcome to enjoy some time being submerged during those few opportunities. She naively remembered that she was almost sad that none of those truly wild floods ever happened in her time, for she would have liked to have seen and experienced them at least once.

"Kara? I just thought of something that might be a problem in hindsight." It was Bali. Karolina was rather curious, since Bali-la was rarely uncertain of herself or her planning so far.

"Well... if we're going to go swimming, I know you can get your shovel back if you need to. But, what about your book? Paper gets ruined in water last I checked." The Death Clan woman looked genuinely distraught at the idea. "I don't want your book to get damaged. And salt water in particular is..."

"Ahh... I see what you mean," said the shovel witch with a quick nod. "Don't worry. It's not a normal book, if you recall. My mentor gave it to me after we participated in a summoning ritual of some kind. It's a lot tougher than you might think. She told me a lot of witches had been known to hang out in all sorts of locales that books would rot in, such as swamps and the like. But a spellbook is inherently magical, it should be fine. I'd be more concerned about simply losing it than getting the pages wet."

Bali had listened intently and nodded her head appreciatively. It seemed to be a load off her mind to hear that there was no issue to begin with. Karolina took note of her concern and smiled to herself.

Minutes later, the smell of salt in the air was pronounced and they could hear the sound of churning water somewhere ahead in the tunnel.

"It opens up shortly after this, if the path held," stated Saiya, reflecting on the odd rerouting physics of underground travel. "Once we deal with everything in the way, you're going to want to swim to a back wall that reaches to a higher ceiling. Look for where the water vanishes under the stone, for that will be our way out. The current is strongest there. And watch your heads! The shadows aren't as merciful to drowning victims with concussions as they are to those with injuries and a stubborn will."

"Kara, I will do everything I can to help you through," said Bali reassuringly, following Saiya's words. "But water is a tricky medium and this might get chaotic. If you get into trouble, try to make a quick screaming sound in your throat without opening your mouth. I should be able to hear the sound."

"Understood," Karolina said. But she took that as a challenge. She was going to make every effort to do this without requiring Bali's help, for Bali trusted her with Saiya's torq. And that trust meant she had an obligation not to be too much of a liability at this time.

However, before they could reach the churning froth of an underground sea, they came to a brief stop and stood tense. Ahead, barely visible in the natural gloom of the underworld, roamed dark man-like forms. They were jet black, devoid of definition, save for vacant white eyes and teeth of a beast. "Geists..." Karolina said under her breath.

She was no stranger to these monstrosities whatsoever. Adelaide could be relatively quiet one night and then become utterly infested on another. They were wandering mindless slaves to their own savage hunger, these apparent spirits of the unresting dead. No one really knew much about them- they arose sometime after the Herald event and only liked to wander during the hours or dark. Or perhaps in lightless areas, such as this cave. They never spoke and only rarely made noise, usually emitting a low frequency hiss or a guttural moan like some mournful crocodile. And they had a peculiar weakness where they seemed unable to process the concept of climbing, which made the light tower in Adelaide an amazing defense against them.

These ones, she noted, were a little different. Still man-like, but more warped and monstrous. Were they of dead Xibalban souls? It was hard to tell. Their outlines didn't resemble anything too obvious. Some were jagged. Others thick and rounded. And some just resembled melting candles in humanoid form. They sloshed through the shin deep water almost silently, wandering aimlessly, save for a vague heading towards the women. Perhaps they were still aimed that direction from when Saiya encountered them.

Gritting her teeth, Karolina finally found herself in a situation within the wheelhouse of her skills as the shovel witch. Feeling emboldened, she raised the haft of her spade, aiming the shovel's flat blade in the direction of these lightless monsters and smoothly slipped her spellbook open in her free hand. Cradling the tome and flipping to a cat eared page for one of the few spells she knew, she began to roughly bark out the magic syllables.

"Rihvel, etun, peshkay, etun, letorl..." Dark runes began to appear in the air around her 'wand', charging up a spell that was much quicker to enact upon than her shovel summoning ritual.

Not waiting for a go ahead from the other, the two Xibalbans seemed to instinctively know to engage the enemy, as Saiya bull charged in as she hissed raspily. Bali-la, meanwhile, amazingly launched herself into the air above the heads of her companions like a rocket with a free standing leap, and flung herself towards the Geists with a bicycle kick motion. The two moved rapidly, much faster than humans would, driven by a once contained explosive blood lust, which was as normal as breathing for the tribes. Seeing the movement of life's essence before them, the geists poured towards them suddenly, as a wave of ravenous blackness had been roused.

I need to stop trying to transalte these....
And I'm guessing that "letorl" is a name of some sort? Because if I try to look it up I just get told I'm spelling "petrol" wrong.

I admire the effort. You're onto something, but it's not quite done like that. Check out my comment on Spelunking Pt.6 for what the real coding to her words is about.

I did read your other comment (after I made that^ one). But by this point I'm having more fun seeing what comes out the other end than I was trying to crack the code.