35. Driving Back the Darkness 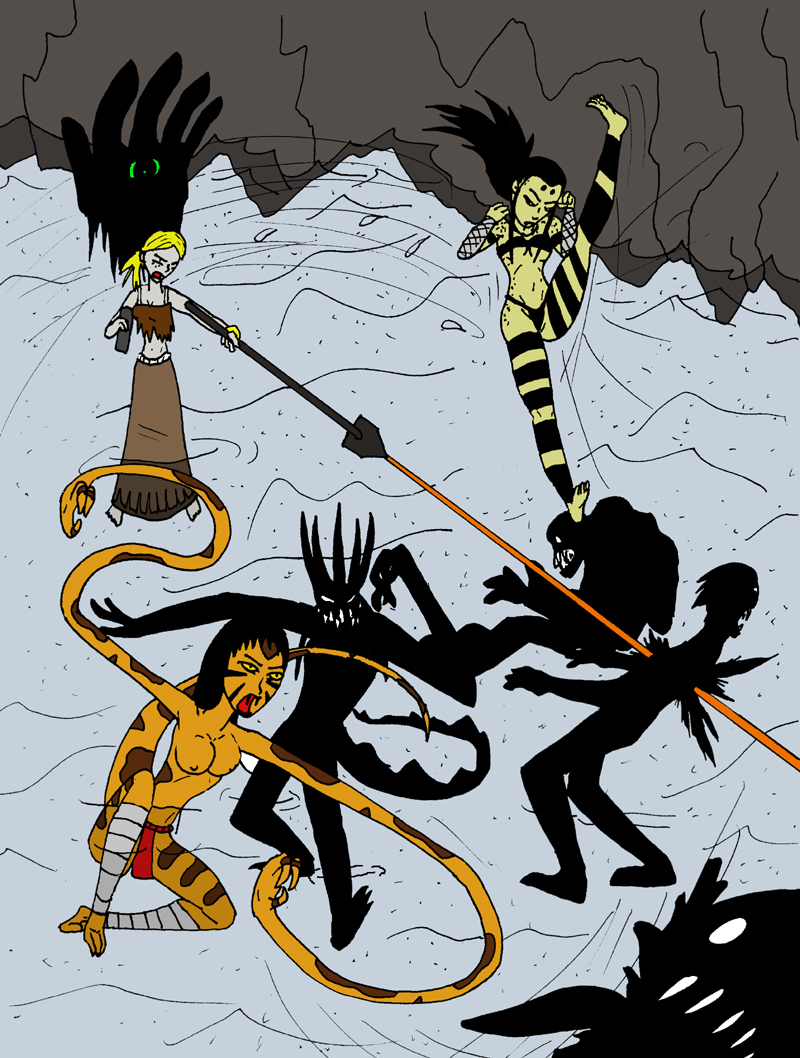 The three women were no shrinking violets as the two groups engaged each other. Saiya splashed through the increasingly choppy knee deep salt waters of the cave tunnel and then crouched upon reaching a modest distance away from the shadowy ghouls. Steadying her footing in the soft cool wet sand beneath the surf, she made quick stretching motions with her arms, as if loosening them up from a pulled muscle. Instead, those two limbs of hers, including the three fingers upon each hand, lengthened and extended outwards, becoming as serpent-like as her people's theme. Her hands adopted a tightened plucking pose, making them resemble the head of an asp. And as the geists approached within some three to four yards, Saiya hissed and began lashing out those now whip shaped arms, striking the geists with a deadly fast serpent's strike. Despite being dead things composed of darkness, they responded to being sharply whipped, as shadow stuff splashed from their wounds and they recoiled from her painful assault. She remained kneeled, holding her position and made a solid defensive asset of her presence.

Karolina was able to easily benefit from this, for although her spell of repelling was quick, it still took a moment to prepare and it had been a while since she used it. Aiming her spade's point at the first unoccupied geist in her sight, she finished the reciting of the spell and screamed defiantly at the creature. A sudden and merciless beam of dull orange light shot from the shovel's tip and struck a geist on Saiya's flank. Ruthlessly, the energy pierced the zombie's body, making a somewhat explosive hole in his chest. The creature writhed and howled immediately, flailing as it began to wilt and stumble back. Although the spell was described as one that would repel a geist handily, it seemed more designed on destroying them violently. She fired again, her aim flawless, blasting another one's face apart, leaving a weird undefined mass of teeth and gurgling as it collapsed upon itself, slowly vanishing into nothingness. "Back to the grave with you! You won't have us!" she snapped at them, unleashing a third shot in quick succession.

She was not entirely aware, but as she continued to fire, she closed the spell book in her other hand subconsciously, as it grew unwieldy to hold open with the unbalancing lateral weight of the shovel in her other palm. Firing again and again, seeming no end to the amount of repelling beams she used against her enemies, she didn't notice a brief manifestation of the entity within her book appearing behind her. It was the very Mark of Chernobog, hovering as some giant ghostly black hand with a baleful green fish-like eye. It silently observed the proceedings, neither interfering or offering input. It vanished moments later, as mysterious and enigmatic as the static image in her spell book. Focused on her own task, Karolina continued to shoot beams, mainly focusing on the ones Saiya was holding at bay. While they hadn't planned a single thing, they seemed to know how to take advantage of the situation.

Meanwhile, Bali landed heel first, kicking in the back of a geist's head. It violently snapped downwards and was introduced to the creature's chest cavity. However, Bali had not even landed when her other leg raised in the blink of Karolina's eye, and was subsequently driven into the zombie's clavicle area. It fell to the ground gracelessly, making only pained suffering expressions. But by now, Bali had landed and planted her knee down on the creature's neck, ending it with a gasp.

Other geists closed in on her and she rose to her feet. But instead of swinging her limbs about or shooting some magical beams, she simply raised her guard and began to dance to some unheard tune. It wasn't obvious at first, nor did the creature's care about how she moved but as they reached for Bali, she smoothly side stepped each one. And when she didn't out maneuvar them as though it were part of her dance, she would unleash a devastating strike from her fists, elbows, or knees. There was no ambiguity about the force of these attacks... the creature's would stumble back or even jerk several inches into the air, depending on where they were struck. Many would ultimately collapse and melt in a single strike and none lasted beyond two, save for the heel kick Bali entered the fray with.

She seemed to fight very differently from Saiya, who lashed out with speed and large swathing movements, keeping her enemies at bay. Rather, Bali's movements looked to be trained. The swaying dancing motions were graceful and her strikes were certain. With each moment, she made the geists look clumsy, as she tore into them with every second of her choosing. No movement was wasted and there was no pattern to easily read. Whether she fought one or several, Bali beat the shadowy ghouls down in a way that seemed effortless. Here, there had been no fight. The geists, for all pretensive purposes, had been assassinated in real time by someone who knew what she was doing.