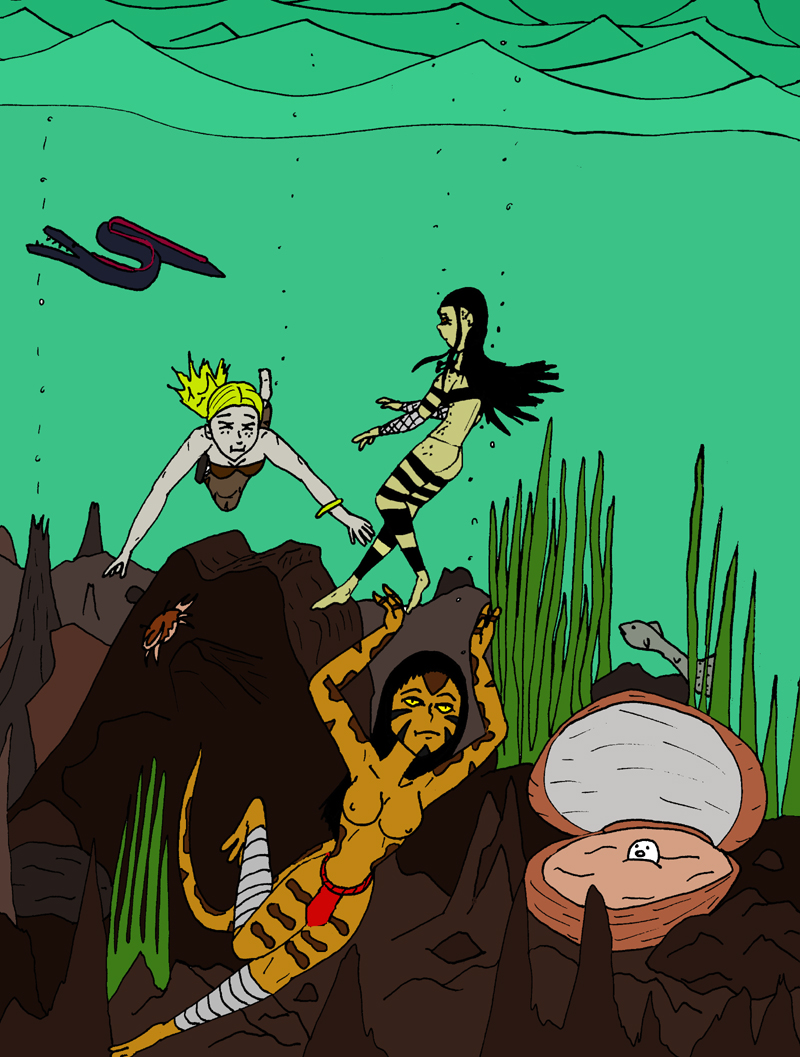 When the geists seemed to have melted away after almost a minute of being solidly thrashed by the three women, an uncomfortable silence filled the air, save for the sound of nearby churning water. Typically, geists seemed to come from nowhere, Karolina thought, although she was of the mind they surely rose from the ground or long standing corpses in general. "Are they all dead? Er, you know what I mean. Are they gone?" the witch asked, her eyes darting back and forth.

No one had a proper answer to share. Either they truly didn't know or they were still too on edge. Just because they managed to fight safely didn't mean it was worth dropping their guard over. Karolina assumed the former, but acted upon the latter. No doubt the Xibalbans had plenty of experience with these monsters. The witch, however, took a measure of pride as she stood on guard. She had not been the weak link at all, but held her own.

As their blood cooled, they were again reminded of the nearby water's sound and the importance of getting out of here. Was it light outside, with a usual orange Xibalban sky? Or a sullen sooty blackness? Recent sleep aside, Karolina didn't have a sense of what time of day it actually was. And despite the danger of swimming both underground and underwater as she was soon to do, she welcomed the idea of being above once more. The tunnels had been claustrophobic thus far.

"Let's make a break for it while they're down," Bali finally said. It didn't sound desperate or nervous, but she spoke with some authority. "I don't think they really swim, but just in case... remember Kara, stay close to us and take a deep breath before we do this. Saiya, take the lead and I'll watch our backs. I can hold my breath for a while and make sure Kara doesn't fall behind." It wasn't meant to belittle their human friend, but every implication was that Karolina would be the least powerful swimmer. She didn't take offense at it, as she knew it to be true, and was more focused on just leaving this place.

The three rushed into the deeper surf and jumped in, as Karolina temporarily abandoned her spade and secured her spellbook. Underwater, she squinted, observing the various small creatures that lived in these underground shoals. She remembered hearing from someone, although she wasn't certain from who, that many underground animals lost their pigments and were often stark white or blind. Yet, nothing here seemed to be. She took it as a good sign that this somehow led to a nearby exit point to the world above. Hopefully, it wasn't too far. Intent on staying calm and aided by the fact the cool water felt relaxing after a sudden fight from the geists, she followed the snakey motions of the orange toned Ophidian in front of her, who seemed to glide through the water. Up and down, side to side, the Xibalbans swayed, only occasionally using her feet or hands to propel her way forward. Like Bali-la on land, Saiya seemed very graceful down here. It looked like a pleasant way to swim.

In mere moments, she felt the suction of an underwater tunnel ahead and rose briefly to gulp one last deep breath before things might become difficult again. Glancing behind her, she found Bali nearby. But her attention didn't seem focused entirely on Karolina. Rather, she kept looking behind them, perhaps expecting the geists to be swimming in pursuit. Yet, there was nothing. She wasn't sure why, but Bali had seemed particularly aggressive or irritated at the geists when the fight occurred. Maybe it was simply the fact that she never witnessed Bali fight before, save for the scuffle with Siouxsie, but she seemed almost mad at the geists. No particular one was her target either- she simply had some apparent enmity with the things, more than their original conversation in Adelaide ever suggested. Maybe something had happened in the past? Perhaps it was nothing but her imagination, but Karolina could only wonder what the mindless cretins had done to sour the normally cheerful Death Clan's mood.