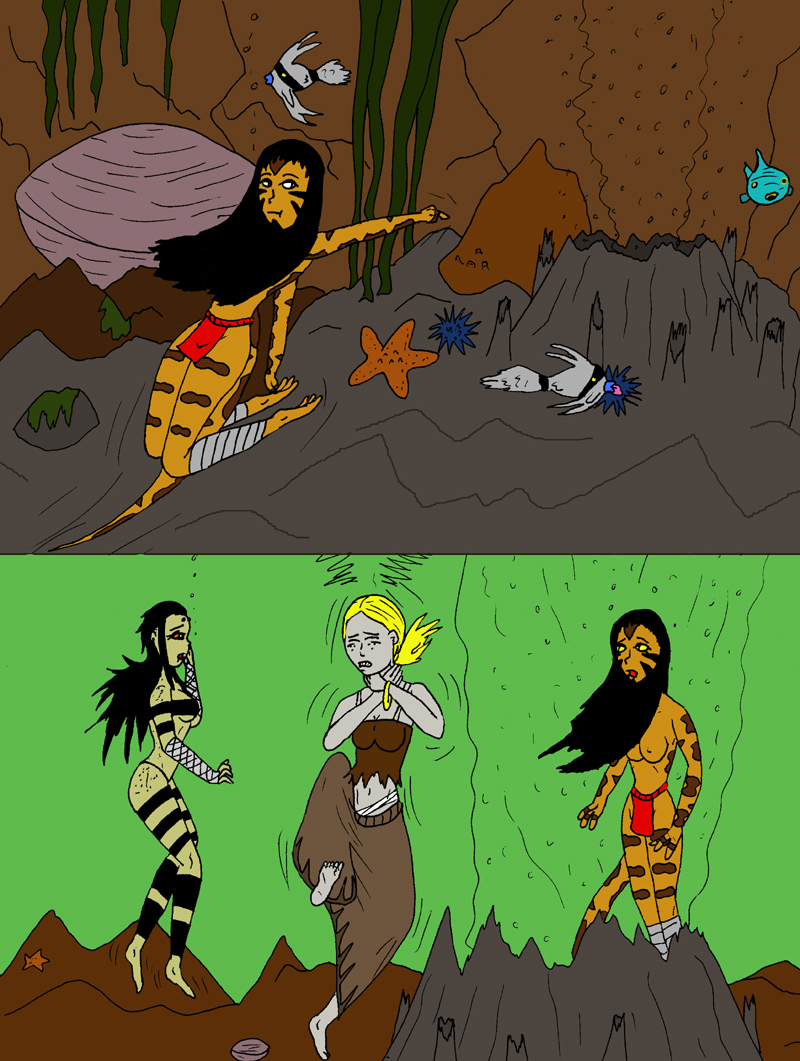 Fighting against the mercurial push and tug of the tunnel's currents, the three soon came upon a series of grey discolored stones, which failed to match their surroundings. These stones took the loose form of tubes emerging from the rocky bottom, from where they belched forth gas bubbles from within the Xibalban earth. Arriving first, Saiya could feel a warm and relaxing heat here to contrast the cooler waters. They were in the right spot.

The other two followed and noted that Saiya gestured towards the formations and then straight up, whereupon they saw an irregular tunnel leading into the ceiling above. This passage seemed particularly long and dark. Occasionally, cooler salt water flowed from above. Surely, this led to the surface. However, Saiya motioned they must wait a bit longer and pointed to the bubbling stone formation. The witch understood that less at first, until realizing how they would escape from here.

Waters flowing into the tunnel from above came cool and dominant, but it seemed it would be impossible to make the swim in time from what Saiya was implying. So supposedly, they were going to ride a blast or some kind of geyser that would emerge periodically from this collection of tubes. The witch could already see many smaller bubbles leaking up already, but it was nothing that would propel them yet.

However, before she could debate the value of such an improvised ride out of the watery tunnel, Karolina began to feel distinctly uncomfortable. Her air was running out. She couldn't speak, use any spell of note, or easily swim back the way she came. Like the tunnel above, it was probably too far. And she didn't want to be left alone down here if she doubled back for air. What if the geyser went off? How long did it take to fire off again? This was a hub area as Saiya said, but would she magically lose the others if they went ahead and she stayed behind?

Karolina did her best, but the burning in her lungs was growing excruciating. After two entire minutes of being submerged, she was reaching her limit, while the Xibalban girls seemed relatively unchallenged. How could they hold their breath for so long? She didn't know what to do, but if she opened her mouth, the flood of seawater would certainly drown her in a terrible fashion. So she waited, agonizingly. Any minute, that geyser would surely erupt and they would fast track to an air filled surface. She wanted nothing more at the moment, as the pressure closed around her.

The two Xibalbans were not ignorant of Karolina's plight. They immediately noticed Karolina holding her throat, and then her mouth and nose. She kicked, flailed, and began to turn colors. The suffering was obvious. Bali shot a worried look to Saiya and then to the tubes, but Saiya's gestures indicated she wasn't sure when it would go off beyond 'any second now'.

Bali searched around quickly, looking for some air pocket, but there was nothing of use. Growing very anxious, she knew something had to be done now and Saiya seemed no less lost. Even if they swam Karolina back to the air filled part of the tunnel, the movement alone might have broken Karolina's concentration to hold on, and there was no guarantee they could swim her back in time. She had swore to protect Karolina, but she had not counted on lesser human endurance when it came to holding one's air. It was a very bad oversight. And now, there seemed to be no options as Karolina struggled vainly not to breathe in watery death.