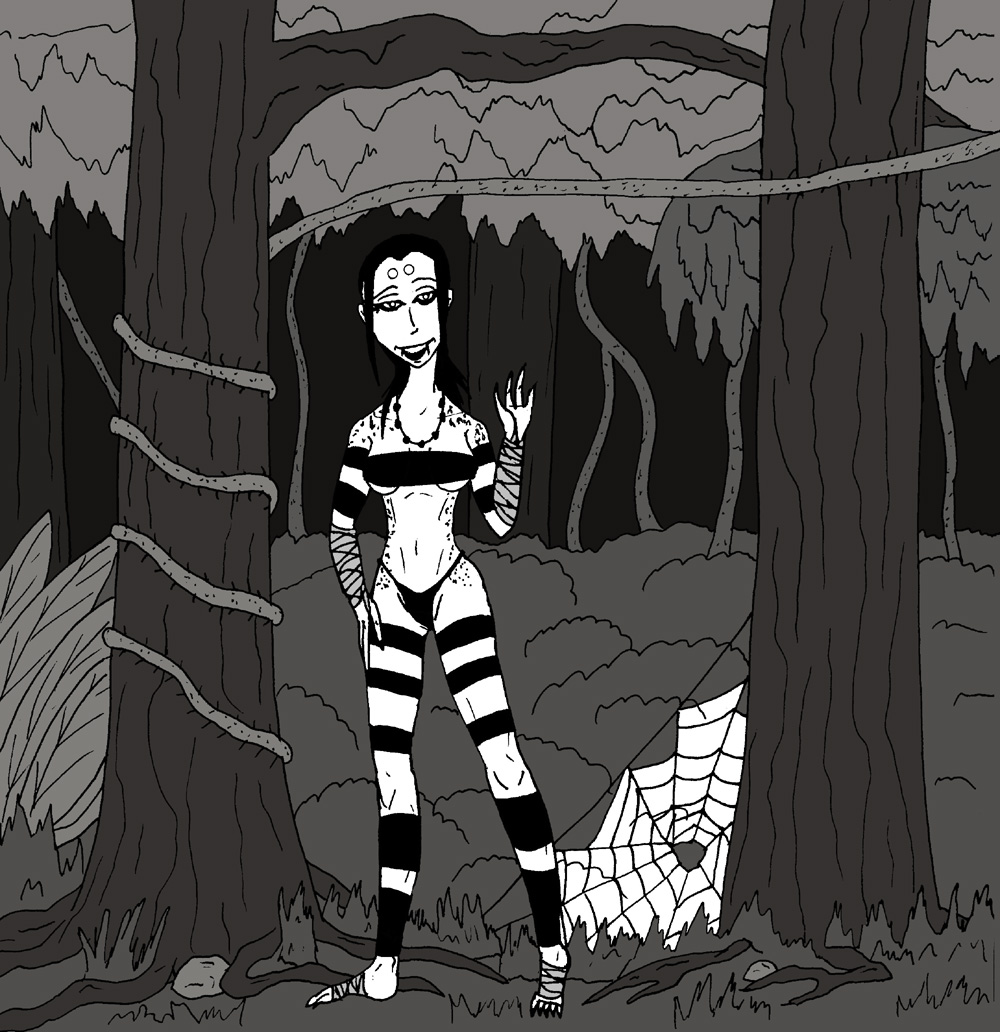 It embarrassed Karolina ever so slightly to consider it, but she had never actually seen a real Xibalban up close before. Her parents and the other villagers were human-only isolationists. Whenever someone (or something) unwelcome arrived to the village of Adelaide, the perimeter guards would attempt to drive them off and sequester away the more feeble or young members of town. After a while, however, it didn't matter how old Karolina was, for those who were born after the cataclysm and had not faced the rigors of the world as their parents had, would be eternally sheltered from the reality of the world beyond the borders of Adelaide. Such was the way of things. Her only true understanding of anything came from the many stories she was told, as well as whatever the hunters managed to bring back of captured fauna.

She had raised the point of her digging spade towards the approaching visitor, but her hands shook slightly. She had no real life experiences with these outsiders and had only been taught fear, bias, and rumors. Little of which told her what to do in this situation and now that she was all alone in the village, there was no one to stand between them. What was the singing about? What did this visitor want? Could the shovel witch even defend herself?

Most notably to herself was something she felt internally. Anxiety. She knew this day would come at some point and it had all been just a matter of time. But that stark stripping of numbness from her mind was almost painful, if not raw feeling.

She had blindly hoped her life in a now uninhabited town would have protected her from the outer world, but again, that was wishful sheep-like thinking and in some ways, she knew it. As for Adelaide, it was in the middle of nowhere, from what she understood. Her town was located along the edge of what was once the great Australian Outback, but it was named after a coastal city that once existed in the times before the Herald. And weirdly enough, it was now also adjacent to some swampy American state that was called Louisiana? She didn't understand it at all, and neither did the other villagers. The only guess put forth by the wisest of her neighbors, said that the world's once many countries and towns had been jumbled up after the many violent earthquakes that occurred during the Herald event, not unlike jigsaw puzzle pieces in a shaken box.

As Karolina trembled and lamented her dubious fortune, the visitor ceased singing and emerged into better view from the swampy foliage. It was definitely a real Xibalban, this one quite clearly a female. She was raven haired, with a wild mane running down the back of her head, as well as long pointed bangs framing her face. Her irises were vividly orange with a punctuated bright yellow pupil, in addition to two more glassy vacant lenses mounted just above her brow. Her skin was some curious shade of sun faded wax and sand, giving her an almost yellowy complexion. There were black body stripes on her limbs and equally black freckle spots running down along her clavicle area, to the sides of her waist and thigh. And true to some stories Karolina had heard, the visitor was dressed lewdly, as many of these barbarians seemed to do. The visitor was clad only in a dark leather bandeau and a matching thong-like loin piece, neither of which covered very much. She was also possessed of a necklace of onyx beads on a string as well as wraps of some kind on her forearms and the arches of her feet.

With black lips and small protruding fangs, the Xibalban smiled and waved at her from the forest's edge. Karolina tried only to steady herself, as she kept the shovel's point between the two of them. She didn't know if the perceived friendliness of the barbarian was genuine or not.

"Well, hello there," said the Xibalban, in a rich pleasant voice. "Don't be afraid, I'm not here to cause trouble."

The shovel witch grit her teeth, trying to remain rational. Not only was this all new for her, but she had not spoken to anyone but herself in a very long time. The basic nature of conversation was surprisingly alien to her senses at the moment.

"G-good. Because I'm not looking for problems either," blurted out the shovel witch rather awkwardly. "What do you want, Xibalban?"

The barbarian woman eased her outright friendly gestures a bit, and instead merely attempted to come off as polite or pleasant. "Ah. Well, I'm actually just a traveler. I was wondering if you perhaps had any lodging for someone like me. Um, I can bring you sand pears and tree nuts from beyond your border, in exchange."

Karolina winced subtly. Did this Xibalban actually just ask her for a stay in town? She wasn't sure she wanted this person anywhere within miles of her, thanks to all the stories she heard growing up.

"Oh... so you can jump me in the middle of the night? Or wait until I drop my guard? Is that it? No, I don't think so! In fact, I think you should just be moving along. I'm not looking to end up as dinner or your slave or whatever your kind do to humans."

The Xibalban woman looked shocked and raised her palms in a dissuading motion. "No, no! I'm not like that! You've got me all wrong, miss. I have no reason to cause you harm or malady. I'm really just looking for a safe place to stay the night. It's been a while since I've made camp outside of the wilderness. This is a village of some size, is it not? You don't even have to acknowledge me. Truly, I could stay in some outlier building or hut, far away on the other side of town from you. I am merely seeking safe respite. The wilds are always dangerous and I am by myself."

The shovel witch frowned and as a knee jerk reaction, wanted little else than to snap back at the Xibalban woman, telling her to simply leave and that nothing more would be heard of this.

But there was something else to this. Karolina couldn't explain it. She didn't consider herself any great judge of other people, but something about how the woman spoke said to her that she wasn't lying, let alone possessed of an interest to attack her. And part of her felt bad for shoving away someone back into the night, given all the rumors she heard of about what lurked in the Outback and the merged foreign swamp. And she had to admit... maybe it would be nice to have some different fresh food to eat, instead of half starving herself on roots, mushrooms, and wild strawberries.

And of course, there was the fact she hadn't actually heard of any other person speaking, in what seemed like forever. Even feeling a sense of anxiety around a stranger like this was better than her usual dreary numbness. And for her part, she knew that not all strangers were necessarily bad, as she side glanced to her witch's hat sitting upon a nearby erected gravestone.

The shovel witch made a troubled expression, before slowly lowering her spade's point. She sighed and looked back to the Xibalban. "Okay... maybe I overreacted a little," she said quietly, realizing she had sounded outright paranoid and hostile. "I'm sorry, I'm not used to visitors here... uh, let alone Xibalbans. I'll tell you what... I'll take you up on that offer of fresh fruit and what not. But I'm going to have to ask you not stay in just any building. Most of them are falling apart and to be frank, it's not completely safe to stay down here at night. I have a little place we can use. When you're ready, I'll show you."

The Xibalban beamed cheerily. "Thank you, miss. I promise I won't be in the way."

The shovel witch struggled with a cautious smile in return. "You're welcome. Ah... do you have a name?"

The Xibalban bowed slightly. "Of course. I am called Bali-la. It means 'Bell Flower'. But you can call me Bali for short."

I recognize her. It's my future wife!

Ha ha ha! She might be eligible. No ring on that finger.