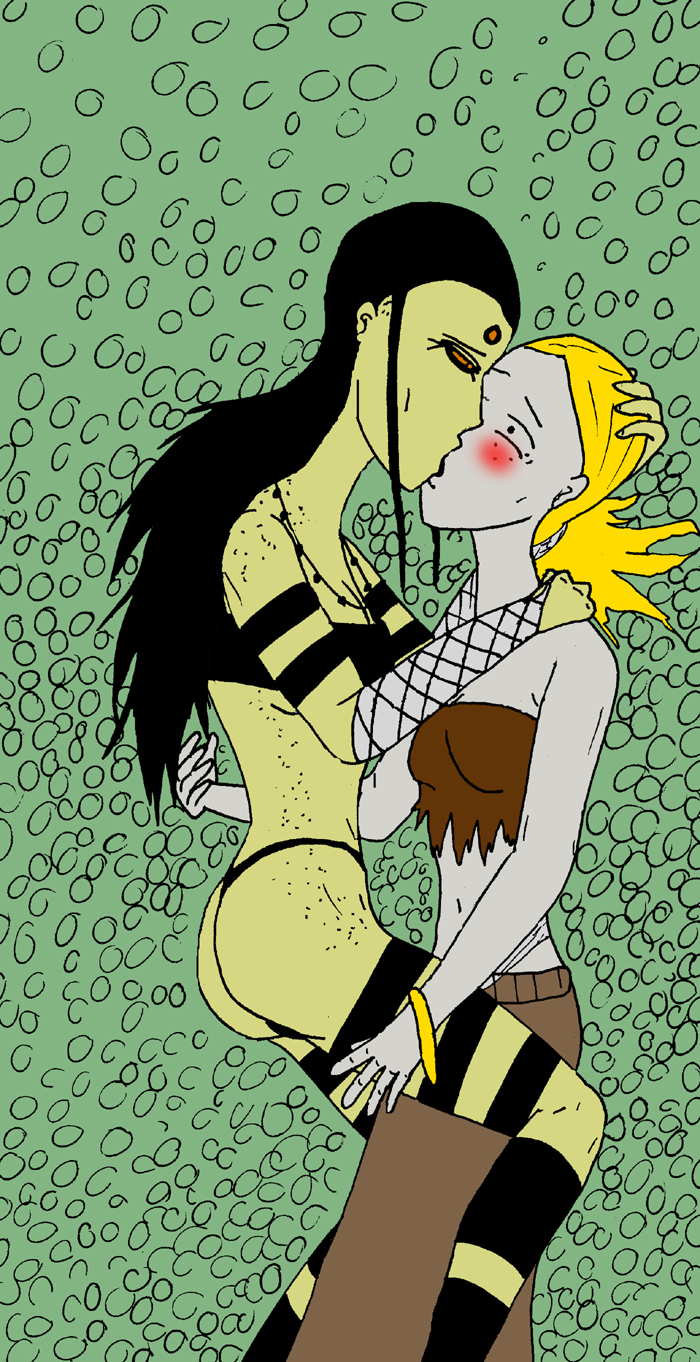 Perhaps it was some combination of her own fading oxygen meeting with the inner terror of drowning haplessly, but the shovel witch failed to notice Bali at point blank range, until she found herself being held by the Xibalban woman. Keeping Karolina as still as she could with a gentle touch, Bali-la cradled the back of Kara's blonde haired head and put another hand firmly on her shoulder. For a moment, Karolina felt some slight sense of reduced anxiety, noting the comforting touch of Bali as the spider woman had swum close before her. Bali was a reassuring presence, after all. But what came next left Karolina reeling, as if lost in a fever dream.

Bringing the human towards her, Bali put her ebony lips to Karolina's and kissed her deeply. The shovel witch's eyes went wide, first from abject shock and second from the unexpected gift of precious oxygen. Locked mouth to mouth, Bali intimately shared her remaining air with her companion.

Karolina blushed hard, taken aback. She froze, her hands hovering around Bali in the water, uncertain of what to do with them as bubbles surged up around them. In a moment, she went from approaching death to feeling incredibly alive, staggered by what Bali was doing. A girl? Kissed by another girl? What?

Bali looked back at her wordlessly as they shared a life saving kiss, her orange eyes slim but observant, studying Karolina. For her own sake, the human girl may as well have been paralyzed by a spider bite from Bali's black lips, but there was nothing so forceful and her prominent fangs were somehow sheathed. Her lips and kiss, were soft. Pleasant. Mellow. And brain melting.

From that moment on, she didn't perceive things very well, only staring with no idea of what to do or feel as she gazed upon the sandy toned spider woman, although for that one brief moment... Bali felt like her entire world and she hadn't known it. What was that feeling? Was that what Saiya meant by Bali being intoxicating?

Without warning, bubbles erupted around them from below in an angry cloud from the sunken floor. There was intense blast of force from the geyser they loomed over and then just as immediately, vertical movement into the dark shaft above them. Kara became rapidly disoriented, spinning head over heel repeatedly and crashing into Bali-la and Saiya in a confused tangle of limbs. There was no controlling their ascent. There was only chaos. Already loopy from a kiss like no other she'd known, Karolina barely processed what was happening.

Finally, the water splashed madly from them as they touched the hot air of Xibalban earth. It was not clear which way was up. Or where anyone else was.

And so, there was a dizzying re-introduction to the orange light. And then, an inexplicable aching darkness. Karolina faded away.