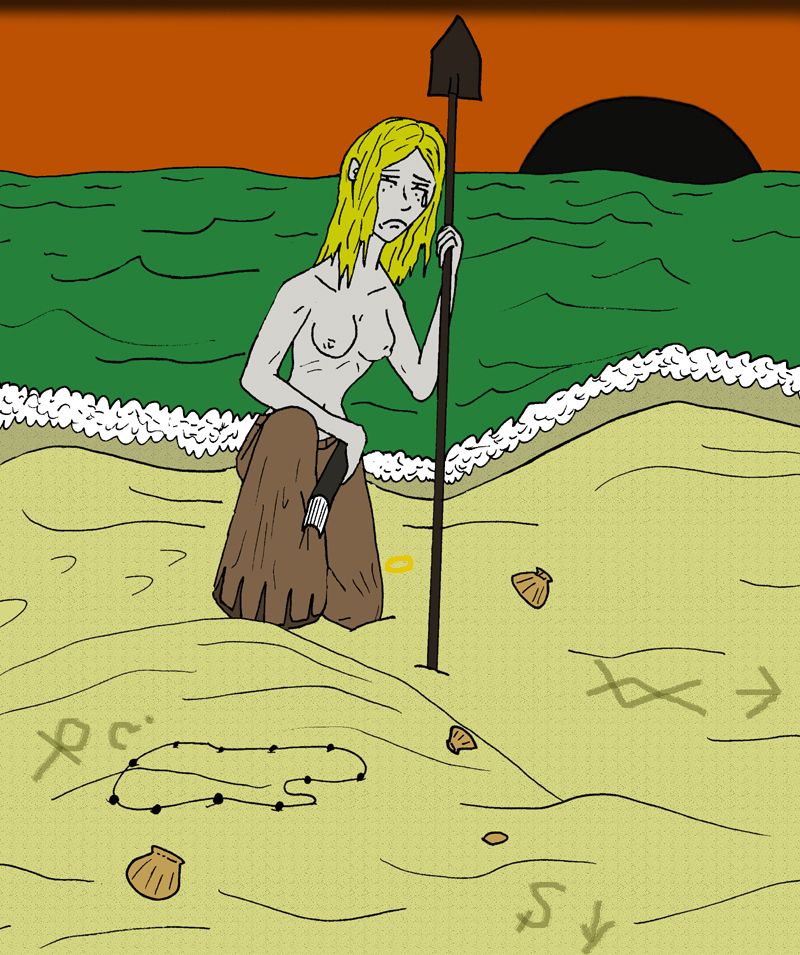 It was some time later when Karolina stirred and found herself under the pumpkin orange sky of Xibalba's surface. She found herself gazing groggily at the sand, feeling disoriented and thirsty. She tried to rise up reflexively, but her legs were as sluggish as her mind felt, leaving her only to cough out unpleasant particles of sand grains and briny splashes of salt water. "Ugh... my head... looks like we made it, eh? That was scary close..."

Only instead of someone responding, this time there was but silence. "Bali? Hello? Are you there?"

"Saiya?" she groaned, slowly raising her head. But as she looked around, there was no one here but her. Her spell book sat some several feet away in the sand, as if discarded. And further, the gift of the Longtooth made shirt that Rathalos had made for her was gone, too.

Getting her bearings, she dragged herself up, coughing up more sea water in the process. She was alone. No footprints, no signs of a struggle, nothing. Just her back to the green sea of Australia's coast, her knees pressed against unmarked sand, and dunes stretching for countless miles everywhere else.

"Where... where is everyone?" she wondered aloud. "BALI! SAIYA! I'm over here!" She waited and then repeated several more times, pausing each attempt. But there was no response, save for the distant whines of coastal gulls.

She looked behind her towards the sea. There was no one there either, save for a dusky black sun in the dim orange sky. Had she washed up here alone? How long was she out? It couldn't have been that long since she woke up earlier... could it?

The webbing on the spell book which rested like a holster around her hips had been ripped up. Similarly, the silken tie Bali gave her was also gone, leaving her hair a starchy mess. Feeling uneasy, she gathered up her book and summoned forth her shovel, treating the latter like some teddy bear.

She pieced together the last several moments she could recall. Swimming after the fight with the geists. Running out of air before a watery geyser. Bali sharing her air in a very pleasant and unexpected kiss... and then, bubbles and chaos. So, where was this in relation to where she was? How did she get here? And where was everyone else?

Troubled and scared, Karolina willed herself to move and began to comb the beach for her friends. She called aloud, heedless of anyone else who might possibly be listening. She checked the shoals, hoping to see someone washed up as she seemingly was. She peered around the many dunes. But there was nothing each time.

Despairing, it was only as the sun was truly beginning to set from evening (how long had it been since the cave?!) to night, that she found some vague clue. Several miles from where she first started, she came upon some markings etched into the sand by a cluster of dunes. The looked to be the signage of the Xibalban tribes. One was familiar, that of two crossed checks. It was the Longtooth's banner and there was an arrow next to it, pointing into the horizon away from the coastal shore. She looked into the distance, but saw no indication of any Longtooth or landmark she could recognize. Still, it seemed to indicate they were in that direction. How far, she didn't know.

Another sign was that of the English letter 'S', or so it appeared. There was a slight line drawn by the upper tip, giving it the appearance of a snake with two jaws or perhaps the tail of a kite, although the former seemed more likely. This too, had an arrow accompanying it. Karolina pondered this. She assumed the arrow pointed in the direction of the Ophidian's home, noting it was almost completely opposite of the Longtooth's indication.

The last sight, however, left her shaken. It was that of an upside down ankh and the sign of femininity. She didn't know what this one meant, only that there was a question mark next to it. The sign of the Death Clan, she presumed. However, it was all accompanied by Bali's black bead necklace. "Oh no... no no..."

She looked around, but there was no indication of why this was here or who made these marks. But to find Bali's prized beads here filled her with sadness. Whoever made these signs was certainly not Bali-la herself. Maybe someone, such as Saiya, found the beads and left these directions here. For the benefit of the shovel witch? Karolina looked on unhappily, despite the notion of help.

While she wondered if Saiya took Bali to her own serpentine village, the question mark with the inclusion of Bali's necklace seemed to say Saiya couldn't find the Death Clan woman, only what washed away from her. And surely, as her friend, Karolina would want to have such a trinket?

And these directions, they were for Karolina and Karolina alone. Even without Bali-la, she had an obligation to fulfill to Rathalos and Siouxsie. Or she could try to find the way to Saiya's home... for all the good it would do.

She stared, as a tear slinking down her tawny cheek. She was alone in the middle of nowhere, in presumably either empty or hostile country. She had no survival skills and no idea what to do, now that she didn't have Bali to guide her. Far away was Adelaide in all its static glory. But it seemed safe and controlled compared to this. And for a moment, she wished she was back there, secure in the light house tower where everything made sense and she felt nothing.

But she had to meet that Death Clan girl and ask to follow her, didn't she? It had been a dangerous journey and even Bali could only mitigate some of their problems along the way. Now, she didn't even have that. Just a shovel and a spell book she could barely comprehend.

Karolina picked up the beads and looked at them closely. She could faintly smell violets upon them. Bali had that fragrance about her, she thought. Looking further at the sand, it was nearly the color of Bali's sand toned skin. Wincing, she looked up... at an orange sky which reminded her of Bali's orange eyes, the mark of fairies she was told.

Choking back tears, she though of that Death Clan woman, who bravely led her away from a boring hell hole of a dead town, through danger, into excitement, and a world she didn't even fully realize existed. She thought of her black wild mane, smiling dark lips, and that showy striped body. And when Bali saved her one last time underwater, perhaps dooming herself by passing the the air to Karolina, she felt passion. For a brief moment, she knew the gift of life within her.

Karolina fell to her knees, letting tears run down her face as she shamefully tried to hide them. She choked out a cry and clutched the beads to herself. Her new friend... her inspiration, was gone. And maybe she had inadvertently died saving Karolina.

"Because I was the weak link..." the shovel witch murmured to herself. "I tried not to be, but I was... what if that's what happened? Maybe she blacked out and..." Rubbing her eyes, Karolina wearily donned the necklace of black onyx beads and held it to her throat.

She cried for several minutes, before calming down. The slow wind was beginning to erase the sigils, bit by bit, grain by grain. Easing her grip, she looked to the beads one more time.

"We have a job to do, don't we?" she sighed. "I can't let this all be for nothing. I have to go back to the Longtooths and get Siouxsie before it's too late." She looked to the golden torq still on her wrist.

Standing up, she stretched her shoulders, noting the oncoming night and the approach of the final day Rathalos allotted for them. But there was no time to sleep. She had to follow through. And so, off she marched alone into the dunes, following the general line the arrow gave her to proceed in. Her eyes were filled with sorrow and duty.

As she walked in the night, she knew this would end only one of two ways. Either she would walk out of there with Siouxsie in tow or she would kill Rathalos for putting her and Bali through all of this if he did not honor the deal. And then surely, she would also die, torn apart by dozens of maddened crocodiles. At this point, she could not compel herself to care. The sadness of the day's events had now given way to steely anger and determination, and there was no room for her anxiety anymore. And so she trudged, resolute to make it back to the Longtooth's area in time.