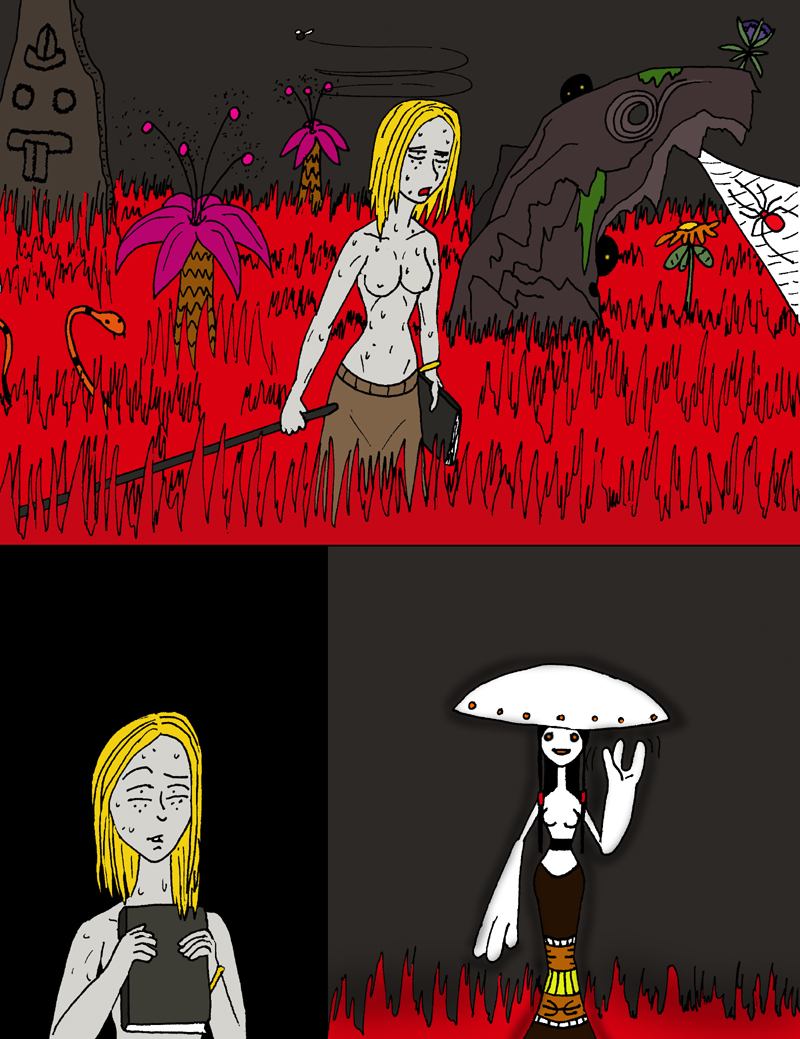 Planning and saying you'll do something is one thing. Most anyone, human or Xibalban, would tell you that the act of doing is where an idea becomes difficult. It's the great filter of the mind, body, and soul, which determines whether every day folk are weeded out of relevance by their own self inflicted apathy and weakness, or if they ascend through their ability to overcome and follow through. As a long time hard worker, Karolina could be absolutely stubborn to a fault when it came to getting a job done. That said, she had a certain advantage back in Adelaide. When it came to burying the dead of the town, she knew exactly how to get from Point A to Point C, whether it was a task or a location in town. Point B was just work or the set amount of time it took to reach a destination, but it was no mystery.

Wandering in the Xibalban night left her with no idea where she was going. Aside from the marking for the Longtooths at beach, she had zero idea where she was in relation to anything, let alone how far. Having traveled mainly underground so far, there were no landmarks or recognizable features she could navigate from. Since the start of her travel, she walked several hours, having left the beach some time ago, although the sad thoughts of what took place near there still followed. Feeling gloomy, it was hard not to think of Bali-la or what might have befallen her.

Eventually, she left the sandier grasses that bordered the beach as she spotted a vast field of red fescues that smelled faintly of spices and food. Believing she needed to cut through (and the fact she was quite hungry not withstanding on her decision), Karolina waded through the often thigh high blades of grass, enjoying the scent of the plants. It seemed perfectly safe and the color was inviting. But as she walked through, her dutiful pace began to grow weary. There was nothing wrong with the grass exactly, although she swore it seemed to attract heat about itself, which in turn further served to dehydrate her. Or was that from simply walking for so long? Or even the weather itself? It was much cooler in the sand cave. Even just wearing the Longtooth's skirt didn't seem to help much after a while, as she sweat profusely. Her shovel soon dragged lazily and her spell book was becoming quite a burden to carry. How she wished she still had her satchel from Adelaide! Or perhaps even just Bali-la to explain how to find safe food and water in the wilderness... yes, either would do right now, she thought.

Along the way, she passed by many colorful plants, small animal life, and even some lurid stone carvings made out of standing boulders. They often had leering faces or unsettling designs. Some were even made with holes that moaned eerily in the occasional breeze that broke up the stagnant hot air. What was this place? How did anyone function out here, she wondered? "Am I even on the right path?"

Dismally dragging herself along out of responsibility to everyone she now knew, she came upon a contrast in the great field of red grass. There, standing some four and half feet tall, stood a rather stark white figure that resembled a bipedal mushroom. Under the white cap-like hat ringed with orange spots, there was a small noseless face with two tiny eyes, which matched the color of the cap's spots. On a long neck, it grew from a small feminine body. She was shirtless, but her breasts lacked nipples and there was no navel visible. Her arms were stick-like at the bicep, and yet from the forearm, they were conical with three doughy fingers each. On her hips, she wore a long but low slung skirt of brown, tan, and yellow bars, with unrecognized folk style patterns. And despite the true lack of mammalian features, she had long black hair with two waist reaching braids marked with a red tube bead. She bore a friendly expression, more akin to a doll than a person.

Confused, Karolina reflexively raised her spell book to her chest, treating it like a shield, as she wasn't sure what to think. "Mushroom people? Oh good..." she stated sarcastically. "Now I know I must be hallucinating in all this heat."

The little mushroom person shook her head slightly. "Maybe so, but I didn't do it. So, hey... I was just going to head over for a drink. Would you care to join me? Beverages are better with company."

A drink? Maybe there was a creek nearby? She couldn't deny she was badly thirsty after all this warmth and sea salt on her tongue. "Well... er... sure?" Whoever this was didn't look too dangerous, although she was definitely much stranger looking than the Longtooths. Still, she had a funny appearance to her that offset the unfamiliarity, as if she were a living toy. And that trilling little voice had not quite evoked fear either.

"Karolina," the shovel witch said with a wary smile. A small certain detail had just reached her as she walked behind the little mushroom person. She had orange eyes. That seemed like a good sign from what Karolina knew so far.