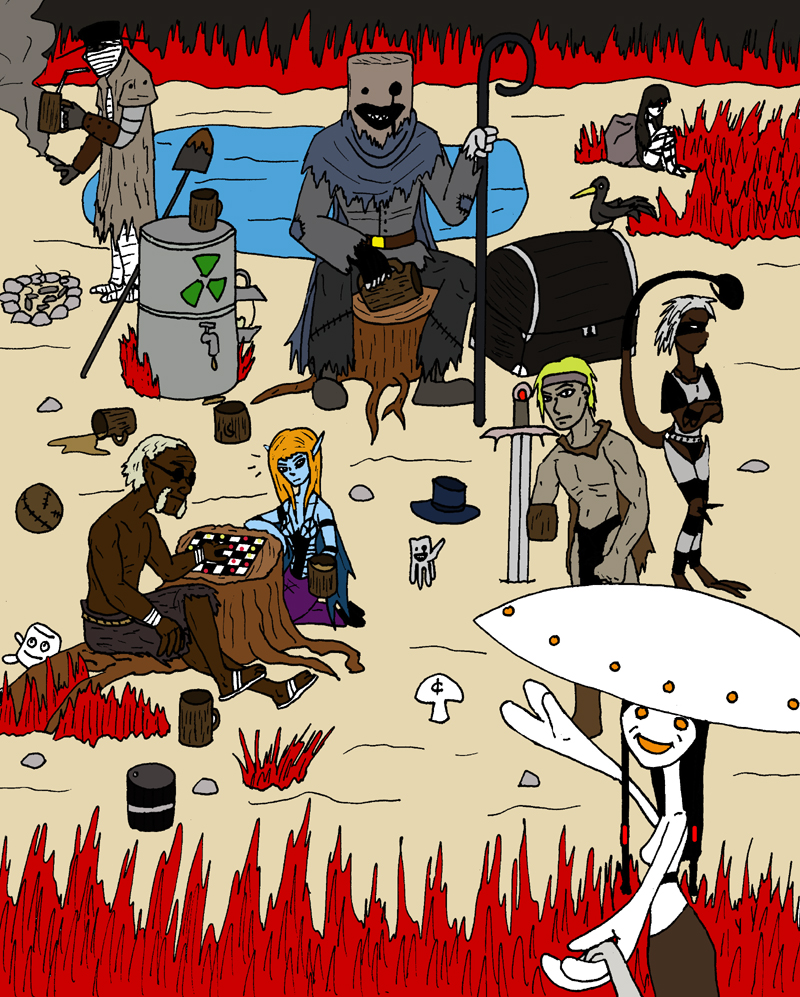 The little mushroom girl (or was she a grown woman?) led Karolina through the red balmy grasses to a clearing some ten minutes away. The shovel witch failed to notice the change up to this point. It was either from exhaustion or perhaps Rottkap could innately detect the direction, as per what she was told earlier. But if that was the case, how did anyone find anything at first? The rules of Xibalba were as murky as ever.

On arrival, she found several individuals. Some were humans, as an old aboriginal man descent played checkers with an unknown blue skinned woman with pointed ears, while another stood enjoying a mug with a great broadsword planted into the ground. One seemed to be a scorpion-like woman, which suggested she was as Xibalban as Bali and Saiya. And others still...? She wasn't sure what to make. It was a motley crew that milled about this scene, most of them savoring some kind of beverage in a tall wooden stein.

Most distinctly, however, appeared one rather ominous man with an old world paper bag on his head, upon which bore uneven eyes and large lurid black lips stretched into an ambivalent smile. He was dressed in shabby grey clothes covered in patches and crude stitching, as well as a ratty faded blue cape and cowl. He seemed to be the brewmaster around which the others orbited, as given his proximity to a large metal drum with a spigot and an odd green symbol, which Karolina failed to recognize as an old world bio-hazard warning. His eyes were black and vacant, which left her feeling uneasy gazing back at him as everything about him screamed maniac. Yet, the others didn't seem to care and even the cheerful looking Rottkap paid him no mind.

"Mister Brand," called out the mushroom girl. "I brought a guest. This is Karolina. Miss Karolina, this is Brand."

Feeling many eyes upon her, she blushed, and waved back nervously. "Ah... hello."

The guests eyed her for several moments before most returned to whatever else caught their interest. Brand, however, vaguely lifted his head and stared. He seemed to have been in contemplation until now, as if studying particles of dirt by his booted feet for some deeper meaning.

"Welcome to my tea party... Alice." His voice was a low, delivered in a smooth bass.

"She's awfully thirsty, I think," said Rottkap, advocating for the shovel witch. "Can she have a mug of Pepper Brew?"

"That depends, dear imp," he said, studying Karolina's face at a distance as he spoke to Rottkap. "But I suppose I'm curious of anyone who carries a shovel in one hand and a book of spells in the other. Tell me, Miss Karolina... where are you from?"

A few of the other guests seemed to eavesdrop suddenly and attention was diverted back to the newcomer.

"Adelaide. One of the last... and now fallen human settlements, in all of conjoined Australia and old Louisiana. How interesting. I thought the village was somehow wiped out entirely. And yet, you claim to come from there, hm?"

Karolina took a measure of exception to that. She WAS from Adelaide, it wasn't up for debate. Almost her entire framing of the world came from there. Who was this man to doubt that? "I am. And yes, everyone else is dead there. My family is there. My neighbors rest there. And I buried dozens of them myself," she stated with conviction.

He nodded slowly. "I see. Mmm... yes, Rottkap. Pour this one a tall mug of my finest domestic. I'd like to learn more about the sole survivor of Adelaide. Are you amenable to this, Miss Karolina? A story for a refreshing drink seems an awfully fair trade to me."

Karolina knew she couldn't linger long, but there was little chance of her getting the wind back in her lungs without a drink. Even if this was beer most likely, she had to do something. Nodding, the shovel witch approached and the patrons seemed at ease again, although they were more curious than judgemental in their gazes now. It appeared everyone knew about the catastrophe at Adelaide. How well known was her little hamlet to outsiders? For the most part, no one had ever visited from beyond the borders to the village proper, save for her mentor, but that was after the fact.

Won't you take me to...funkytown!

Fine, but you're chipping in for gas.