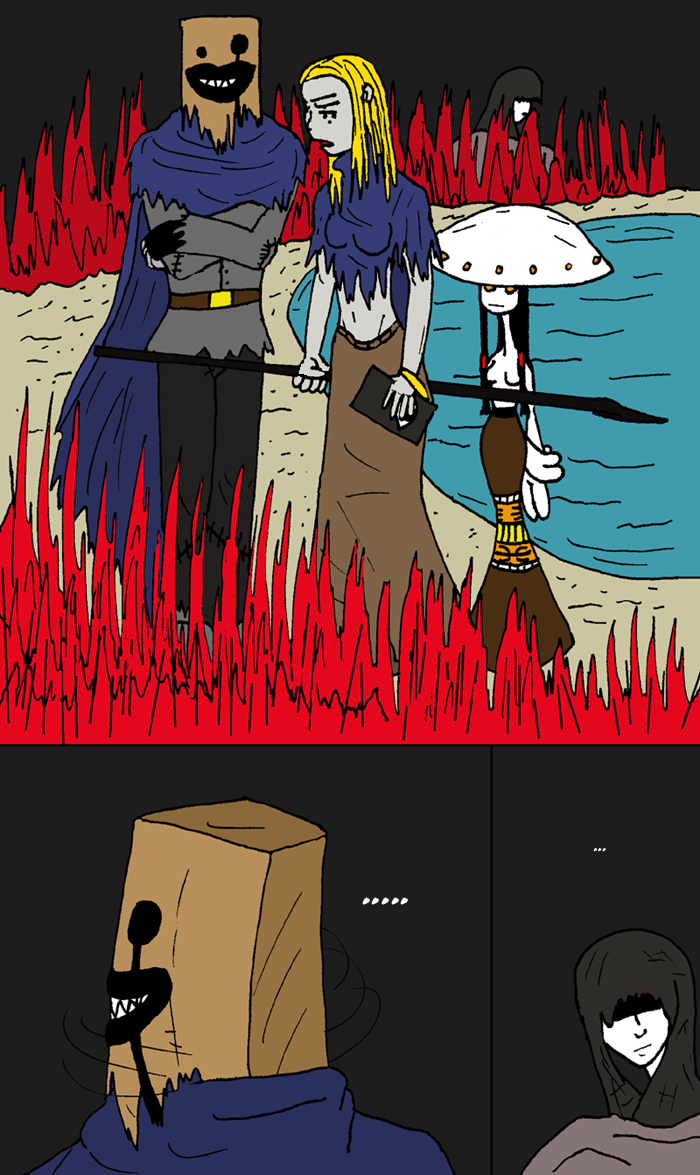 Karolina looked at the horizon. It was a smoky sky of gloom over the warm red grass surrounding Brand's oasis. She picked up her shovel. It felt reassuring to hold in her hand, like a child's favored doll. The story of what happened at Adelaide was not something she truly wanted to share. Not even with Bali-la, and she trusted her explicitly. Long ago, she once thought of what she might say if she were ever asked. "I don't remember" or "I don't quite know" was her planned response. And partly, that was true. She would come to believe this illusion she created. And now, everything was being betrayed. Because she was dehydrated. That's all it took. The shovel witch cringed. What was being traded here, but one misery for another?

Karolina sighed and whispered something to herself as she collected her thoughts. "What you will want most in the world is irrelevant. Because it will be replaced when you are set on fire. Then what you will want most is to stop burning." She couldn't remember who in her life spoke those words. But she felt them now.

"I beg your pardon?" came Brand, sitting behind her.

"Nothing. You want to know about my witchcraft? And Adelaide? Those stories run together, I suppose. But... I don't remember them perfectly anymore."

"Mm? Trauma, I would assume," bluntly stated Brand. "So, you were in Adelaide when it happened?" Rottkap glanced at him briefly and then back to Karolina.

Karolina neither spoke or turned to acknowledge his question. Her blond hair wafted gently in the sultry breeze of the field. He waited several moments.

"I believe we had an arrangement, Karolina," he reminded her.

For a few moments more, she still didn't acknowledge him. Her jaw and chest felt tight. She thought about digging holes in the ground. It was good mindless work. "I know..." She shook her head slightly. She was still not that strong.

"Darkness. I remember a great deal of darkness. One I couldn't see through, more empty than the bleakest of nights. I worked the cemetary at... some point before everyone died. There's a gap of memory in there... I can't really explain what happened, not even to my own liking. It was a normal day. Then, it wasn't..."

"I awoke at some point, feeling a great deal of pain. My vision was blurry, too. I was covered in debris. I uncovered myself and found my village destroyed. Everyone and everything was dead. People. Animals. Didn't matter. The buildings were half destroyed."

"What happened?" asked Brand. As he asked, he felt eyes at his back. Glancing around, it was one of his more silent visitors. A ghostly pale woman covered in a ragged grey shawl who kept to herself. No one else seemed to acknowledge her presence and for the life of him, he wasn't sure why she had been hanging around lately. She never ordered drinks or spoke, for one. In any event, he found herself sitting behind a rock as she often was, but her attention was faced on the conversation with Karolina. He made a note of that and looked to Karolina again.

"I'm not sure... there was blackness. It was everywhere, I think. Terror. Eyes. Hands. And teeth. But no source. I never found what or who attacked Adelaide. When I was able to walk, I began to doubt there was any external source. But I remember the feelings of it. Chaos. And screaming. To this day, I can't really explain it. And I think part of me really doesn't want to. That's basically it." The shovel witch looked on grimly. She really did not want to think about what happened that day.

"Interesting. But that's more vague than I'd prefer," considered Brand. He stood up and stepped closer. "Are you certain you aren't telling me all there is? Were there any identifying wounds, for example? Did you hear something or someone unusual speak?"

Karolina slowly shook her head, glaring at nothing. "I can't give you what I don't have. I don't know how I survived and I don't know what precisely happened. It's literally a blur of darkness, screaming, and terror. And it hurts to think about."

Brand sighed, disappointed. He felt the eyes of that silent guest at his back again. But this time, he didn't glance back at her.

"Very well... what of your witchcraft, as you put it? Is that also a glossed over account?"

Karolina looked at him with mild disdain. His tone was starting to annoy her now. "No. That one isn't like a dream whatsoever. I remember my mentor rather well, although... perhaps not all her teachings."

"Until I met... well... my teacher was the only other person I encountered after the disaster in Adelaide. She showed up around a year or two later."

"Did you ever meet her prior to that event? Was she perhaps from town?"

"No. My mentor was and is an absolute stranger to me. She was only around for a week at the most. And then she left." Karolina snapped her fingers. "Just like that."