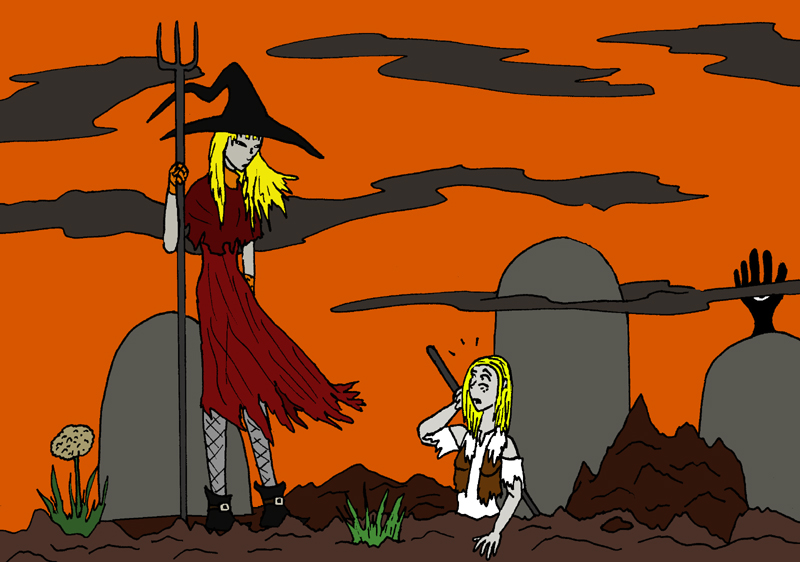 "I was digging a grave as I often did during the day when I felt someone watching me. I looked up and my heart skipped a few beats. Remember, this is the first person I saw in what felt like forever. Anyway, I thought she was a geist at first, if just out of reflex."

"She was a very thin woman, maybe a little taller than myself. Blonde hair, curved black booties... even nylons, somehow. But I'll always remember her crooked witch's cap and her raggedy brick colored dress. It had a cowl on it, like you do, Brand. And she... she had these weird chicken-like hands. And huge narrow eyes. Oh, and a pitchfork!"

"She was human?" asked Rottkap idly.

"As far as I could tell... I thought she just had strange looking gloves on, but if she did, she never took them off."

"So, she's just staring at me and before I could say anything, she asks, "Have you ever considered practicing magick? I was a bit gobsmacked at first. I wasn't even sure how to speak like I used to. Who was this person? What kind of weird question was that?"

"Well, she eventually told me her name was Ruukunda and that she was a witch. And that she was looking for me, in particular. She tells me that she thinks I'd have potential at using magick and that I could use it to make life easier for myself. I'm naturally suspicious, so I ask what's the catch and how do I know she's not just screwing around with me?"

"She points to a nearby sprout, mumbles something, and before my very eyes, it grows into a grown weed. Well, I never thought about magick before, but my little mind was blown."

"Over the next week, she came and went. We performed some kind of ceremony which gave me my spell book and told me I could I use my shovel as a 'wand'. She also gave me my own witch's hat to help me focus, but... I don't have it right now, let's just say. Anyway... she taught me some basics, like how to read the book, how rituals are done, and so on. I practiced for a bit and I came to learn three spells."

Karolina wrinkled her nose. How much was an average anyway? "Not... really. I'm not very good. Ruukunda told me to practice often, but I mainly focused on my work as a gravedigger... I felt kind of stupid making hand gestures and nonsensical chants to thin air. That said, two spells work with my shovel. The other is admittedly useful- I can drive off geists with it."

"Annnd... there's another spell. More of a ritual, really. But it's way above my understanding and... I played with life and death, if just with the best of intentions. In fact, I'm actually heading to the Longtooths after this... um, as part of that."

Brand nodded, relatively content. "I see. And this Ruukunda... just, gone? Did she ever explain why she was teaching you?"

"Yes and no. She just vanished one day and didn't come back. And she never explicitly said why she was taking the time. I got the impression that she wanted to teach for it's own sake, or spread witchcraft usage in the area? Dunno."

"Is that satisfactory, Brand?"

The bag headed man chuckled to himself and Rottkap seemed more interested suddenly. "Oh, absolutely. What a fine day this is, to hear of such things... and to learn you're heading to the Longtooths? Yesss... this will do, nicely."

"Er, what are you talking about?" Karolina asked.

"How do you feel about a bit of company?"

"Not quite. But sort of. How about another favor for you, if you agree to escort Miss Rottkap over there and... a bit of my influence?"

"Hmm. What kind of favor?" Karolina asked suspiciously. He was a fine brewer, but she wasn't sure how much she wanted to indulge him.

"I happen to know a smattering of magick, too," he told her. "I'm no wizard or witch, but... If you're interested... how would you like to learn some tips that your teacher might not have mentioned? I am, after all, an information broker..."