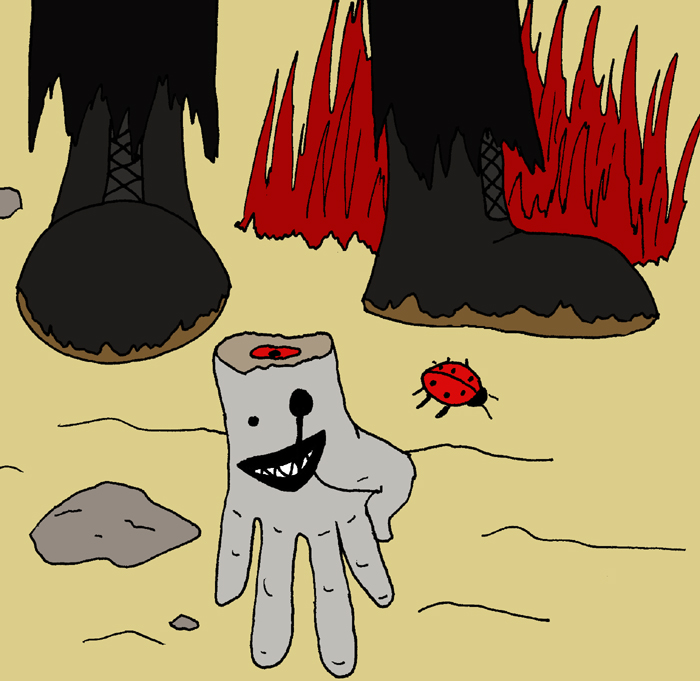 "Hrm..." Karolina pondered the offer. It might've been useful to learn a trick or two about magick, especially since Ruukunda wasn't visiting anymore. The art of the craft was still rather abstract. Still, taking the deal meant working more with Brand. She wasn't sure what to think of him. He was both helpful and a bit annoying, but she wasn't sure if he was more rude or useful. And what was Rottkap's involvement in this? Longtooth territory was dangerous and she seemed rather inoffensive for a little mushroom woman.

"Why do you want to go see Longtooths, if you don't mind me asking?" inquired Karolina.

Rottkap smiled. "At this time, I'm traveling on behalf Queen Zanza-Anzulu, sovereign of all worldly fungi. She bade me to deliver them a message. Other than I don't know the exact way there, that's all I can speak about it for now. It is also safer to travel in numbers- there are many creatures that wander that are far stronger than I, Miss Karolina."

"Queen of fungus, huh..." mulled Karolina. It sounded a little odd, but then again, everything outside of Adelaide had some aspect of weirdness to it so far.

"Similarly," began Brand, "I would like for you to take along my familiar to the territory of the alligator people. It would be useful to learn where they are exactly- I've not risked a visit yet, to be entirely honest."

"Hang on... what do you mean by 'familiar'? I've heard of something like that from Ruukunda..." said Karolina, turning her head to face him.

"Look down," he replied.

There, near his feet, stood a disembodied left hand with his grotesque leering face on it. It was a human hand, with the same color of Brand's skin.

"Guhhhh! What the heck!" Karolina practically jumped into the air and stumbled backwards, catching the glances of many distant onlookers. "That's a familiar?!"

"By definition, yes," said Brand, rather calmly. "His name is Tom... Tom Thumb. I made him some time ago using what magick I know. He's quite useful, I must admit."

Karolina cringed. Tom Thumb bowed before her, looking up at the witch. "I serve, Mr Brand in all ways. I take care of business when he is away, relay messages, and in this case... scout new terrain for him, so that he may remain safe here in the sea of red grass. I'm surprised you didn't see me before, Miss Karolina. I was waving at you when you first arrived."

Karolina paled a bit, trying to deal with a talking disembodied hand. "Er... um, how is accompanying me going to help Brand?"

"As a familiar, I share eyes and ears with Mr Brand often, so to speak," said Tom, his voice small but surprisingly polite in tone. "As you may know, when one visits a location of distinction, or a 'hub' if you prefer, it becomes easier and faster to find it again in the future, as the very land tends to... 'wander' when it is not being observed. Surely you know of Blood Sensing? You concentrate in your mind of a place you've been to and then start walking in the direction you feel it to be. Eventually, you will arrive upon it, even if the route taken is incoherent and different than from whence you came."

"Agh..." the witch sighed. "Okay, I get it. The thing is... I can't do that blood sensing thing you mentioned. I have only a vague direction given to me, based on a marking on the beach I came from. I mean, I've been there, but I don't have any special way to navigate there."

"Hmm... that's not good," noted Brand, tapping a region on his face where a chin would normally be. "Honestly, it's unheard of to be unable to do blood sensing in the current age. You never felt a specific pressure or a frequency in a place like that?"

The witch frowned, a bit embarrassed. "My friend... explained it to me. But it's not something I ever noticed." She closed her eyes and tried to focus on the Longtooths home, but she didn't feel anything distinctive, let alone a sensation that would point her in one direction versus another. "No, nothing..."

"A thought occurs, Miss Karolina," pondered Rottkap, folding her arms. "That town you come from... Adelaide, right? Was it well maintained? And you spent your whole life there, until recently from what I gather?"

"Eh? I suppose. I never really thought about it. I guess it was only dilapidated after the incident... and yes, I only left it the other day. Why?"

Rottkap cheerfully clapped her hands together in triumphant. "Well then! I think I see the problem. And I might be just the one to the help you help us." Brand and the witch stared curiously, neither following the envoy's conclusion. What did she have in mind?

I love how this comic explores the suburbs of insanity without sharing the same zip code.