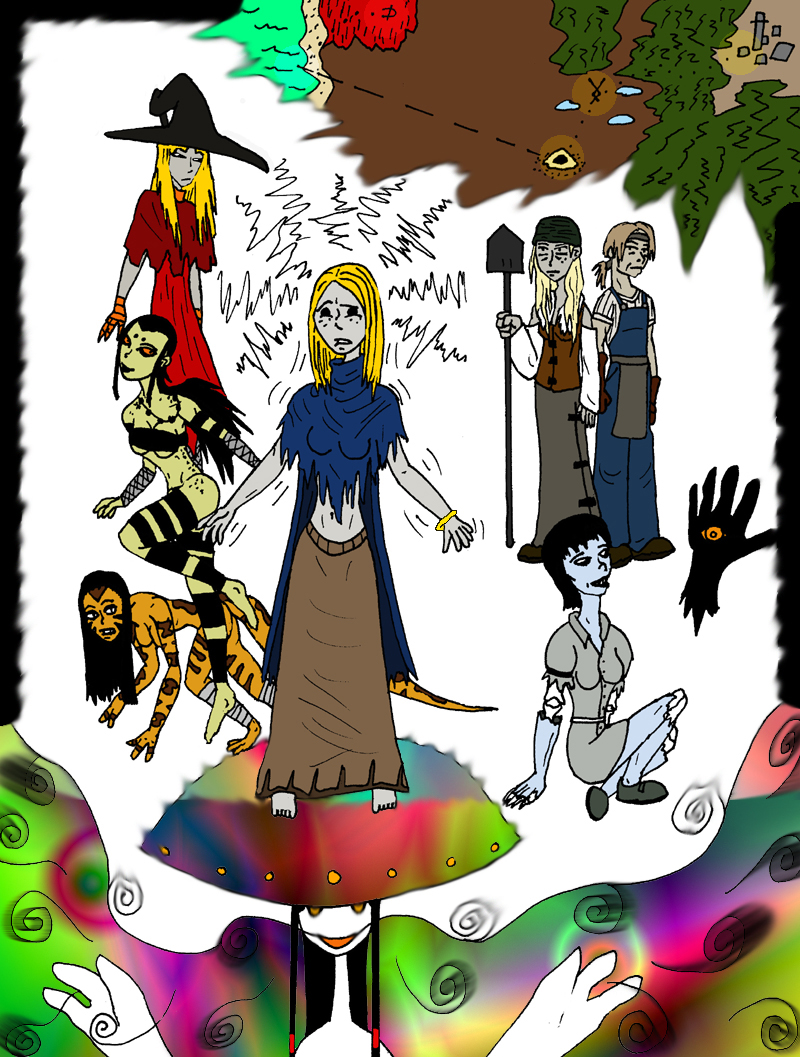 Rottkap moved to stand directly in front of Karolina and outstretched her lumpy thick fingered hands. "Now, I want you to keep in mind that I won't hurt you, okay? It may be a little scary or unsettling, but it's okay. I can help you."

"How so?" asked the shovel witch.

"You grew up in what sounds like a relatively sterile location, as far as it relates to Zanza-Anzulu's mushrooms. But you should know that fungus is an important part of Xibalba, from the land to the beings that walk upon and crawl within it. They have grown accustomed to Lady Zanza's gifts. What I can do is jumpstart that process within you... and it should allow you to use Blood Sensing as everyone else can. No one can last long in the wilderness without it. And because I need you to guide me to the Longtooths, I ask that you let me, as a representative of the queen of mushrooms, help you in this manner."

"Well..." Karolina pondered the matter. She had to admit that it would be a useful gift to mentally riddle out paths from one location to another. It even sounded like some kind of innate form of magick, which sounded a lot better than sluggishly reciting spell intonations. Maybe she could learn something useful from the process beyond Blood Sensing? "Okay... what do I have to do?"

"Just stand right there, face me... breathe in deeply and try not to close your eyes," stated the squeaky little mushroom woman. "Focus on my breathing. Ready?"

Rottkap began to concentrate on breathing in and out, taking deep breaths in the process. "Focus... on... me..." The words quickly started to become garbled.

Karolina watched intently as Rottkap's face began to stretch and contort, as she continued to breathe. The colors in the air- wait, when did those appear...? ...began to dance and sway. Karolina's vision began to swell and focus all at once, as she felt stranger than any time that she could recall. The scene around her darkened except for the fungus girl, who seemed to glow with a rainbow-like aura of shifting colors and patterns.

Then, the shovel witch began to see people she knew. Saiya, Bali-la, her late parents, Ruukunda, Siouxsie Q., and even the Mark of Invocation from her spell book... all looked upon her, muttering indistinct words as they seemed to have some kind of conversation with her, despite her inability to understand any of it.

Karolina's head felt like it was swelling and contracting, as if breathing from her brain. She stood, wobbling, as radio waves began to pour from her mind, pinging off of rocks, dragon flies, and memories. And of those old memories, she felt what sharp edges they once had, begin to file themselves down into a smoother less painful form. However, she still avoided that one specific memory that Brand asked her about... but she felt there was a path to it now if she wanted it.

As far as paths went, while she reflected on Adelaide, a crude papyrus map appeared in her mind, showing a vague topography of the many places she visited in the last several days. Marking it simplistically in her mind, she began to walk a series of dots and lines from Adelaide, to the wilderness beyond, then to the Longtooth's territory and the sand cave. From there, she crossed a great distance, only to appear at a beach, and thereafter visit the field of red peppery grass, where she was now. If she merely focused, she could see it now! It was all so easy!

But as she rejoiced, the pressure and chaos continued to build. The voices of those she knew grew louder, as they tried to impart something to her.

'Remember who you are and where you came from, Karolina,' said her mother Carol. Her father stood by in unity with his wife, nodding in agreement. 'Work hard at anything you do, for that is our best trait,' he stated plainly, as his voice often went. 'We will always love you.'

'I'm the mistaken responsibility you can't overlook,' said Siouxsie, with uncommon clarity. 'But I'll be the friend you never knew you needed if you let me. Please be patient with me. Good things can come from mistakes.'

'You're not on my level, or anyone else's,' Ruukunda told her bluntly. 'But there is more to you if you want it. I did not choose to teach you randomly, Karolina. Study, practice, and succeed. Opportunities do not knock twice.'

'Rejoice, for the world is wonderful and terrible all at once. You have a mind and you have a body. Together, you are a unique instrument which can perceive as much as you're willing to allow. Embrace life!' encouraged Bali-la with a musical tone in her throat. 'Love, lust, sing, dance, fight, and learn!'

'I am the sea, infinite, deep, and vast. You and I are not equals, but we are One,' silently came the presence of Chernobog, her Mark of Invoking. It continued to speak without speaking. 'Flow through me, as I flow through you. Darkness is the birth rite of Xibalba and especially witches, great and small.'

'Whether strong or weak, survive,' reminded Saiya. 'Be useful, be fair with others, and they may do the same with you. The world has much to teach even the experienced.'

Karolina trembled and could only grunt incoherently as she collapsed, seeing the heavily breathing image of Rottkap waver before her vision.