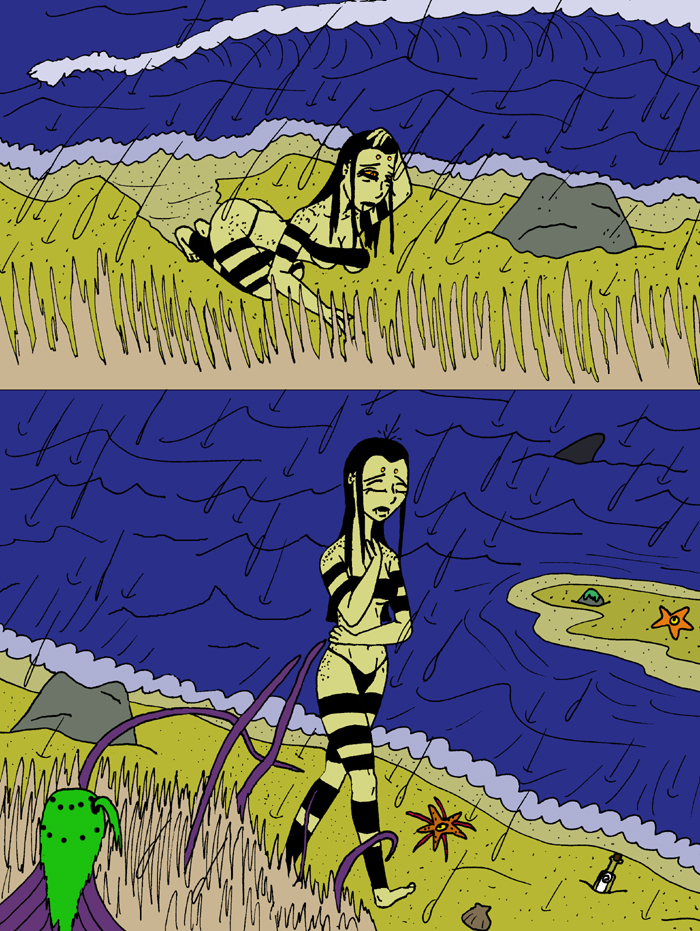 Elsewhere in space and time, Bali-la began to stir to the cool pitter patter of droplets at her back. Coughing out sea water, she sat up and tried to get her bearings. "Where... where is this?" She was laying face first on an unfamiliar beach, with the sea licking at her legs as it had been for a while now. Light was dim, suggesting the time was evening or early night, but a growing rainstorm overhead made it unclear.

Her mouth was dry and her head hurt amidst dizzy spells. No doubt, she had imbibed more sea water than could be said to be even a bad idea. How long was she out? Glancing about, she noticed she was alone and there was no trace of Karolina or Saiya. That was not good.

"Hello? Kara?" she choked out. "Saiya? Anyone-?" She waited, watching, but the only answer came from the wind, crashing surf, and rain.

Her last recollected thought consisted of giving some of her air to Karolina and then a blast of bubbles from beneath shooting them up an underground water filled stone column. They rose quickly and then there was a sudden sharp pain against the back of her head. "Ohhh... I see..." she muttered to herself. She felt a bump under the anterior side of hair which stung terribly.

Realizing she smacked her head blindly against stone within the geyser, she could only think of the luck that even allowed her to survive drowning unconscious at sea. As it was known by even young neophyte Xibalbans, the shadows that gave vitality to all beings that had the will to survive their ordeals... tended to be much less forgiving in circumstances of drowning. Yet another thought arrived to her. "What if it wasn't luck?" Could Saiya have dropped her off here? Maybe the seas didn't allow them back to the mainland? If that was the case, perhaps both the shovel witch and Ophidian were here in some capacity?

She attempted to use Blood Sensing to gather her proximity, but she was met only with painful static. Her head injury and weakened condition surely had everything to do with it. Sighing, she rose. The Death Clan wondered if she should stay here and wait, or search for the others.

Observing the rain, she sipped the fresh droplets. Normally, she enjoyed the rain quite a bit, but she knew she was off center with her injury and inability to sense her location to other places she had visited. All she knew was no one was immediately around her and she was lost for now. Perhaps the smartest thing to do now was to find shelter and try to recover. She could only hope the others were alright. At least, she wanted Karolina to be okay. It was quite likely that Saiya left her behind, owing Bali-la nothing at this point. The spider woman knew there was likely little chemistry between the two, as some Death Clan could tell during moments of intimate feeding as they had in the sand cave. Saiya likely wanted to get back to her clan to report in, if she was indeed of the scout caste as presumed.

Coughing more as she stood, she felt ill and enervated. She knew she lost some of her inner resources and stamina if she was floating at sea for any length. Rubbing her throat idly, she noticed she was missing her beloved black bead necklace. Anxiously, she scanned about her surroundings, but it was nowhere in sight.

Feeling glum and worn, she began to walk, hoping to stumble across it on the beach before long. The necklace meant much to her and held sentimental value. But the greatest possibility was the necklace fell into the water and rested anonymously in the great salt. She would never be able to find it, if that was the case.

Sad and off her game, she also failed to notice she was not alone, as muave toned tentacles slithered towards her from a nearby stretch of dune grass where danger had been lurking patiently all this time. A green haired head bearing a ring of black spots had listened to her earlier call for anyone. Unfortunately for Bali, the lurker was far more interested in capturing her than having a pleasant chat together.

Those black bands on her, are they part of her natural skin color or are they clothing?

First thought; Oh hey, she's not dead. Not that I'm not happy, but with how the first story liked to go at times I had thought her part was well and truly over.
Second thought; I wonder what the messige in the bottle says?
Third thought; "Time and space"? What, is she a Gallifreyan now?

I imagined the message in the bottle in an abstract way when I wrote it. Granted, we'll never know what it says, but I imagine it was floating around there since before the Herald Event, woefully unanswered. Even if Bali opened it and looked it, she wouldn't understand since she's admitted to being illiterate. It was sort of an obtuse symbol for hopelessness, in my mind.

Heh. As for the time space comment, it's mainly because I keep the time frames intentionally vague and how Xibalba's land mass randomly moves when no one notices. So it's definitely somewhere!