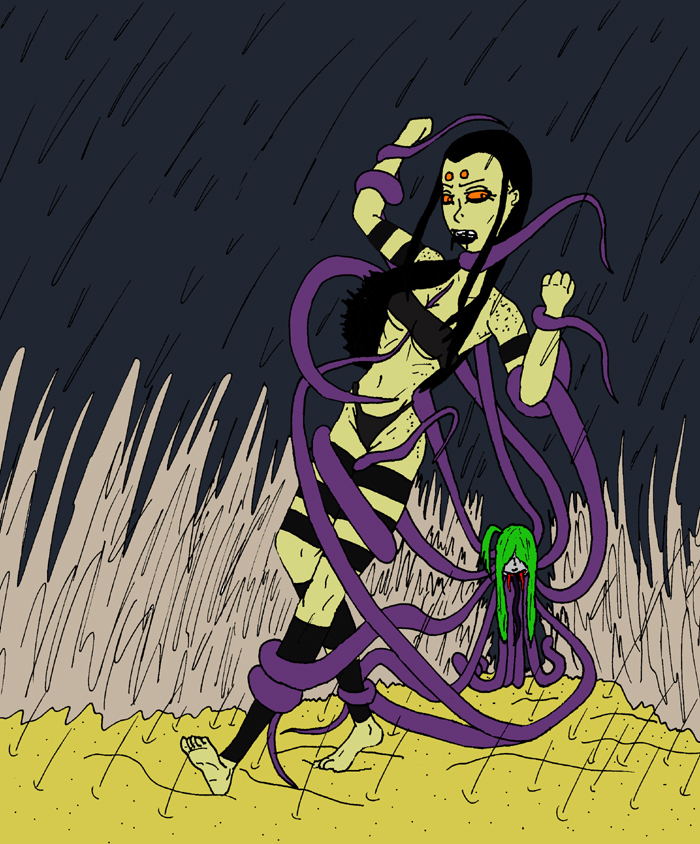 The green haired aggressor attacked suddenly, launching an ambush on Bali-la, as smooth muave toned tentacles lashed out like whips, encircling the Death Clan woman. Bali heard only a brief parting of dune grasses and reeds when she turned her head, only to find numerous tendrils grappling her from behind. Gripping tightly, they constricted and began to drag her backwards, as she stood with one foot in the air, mid-step.

Her heart rate shot up, realizing immediately something was attacking her. She was equally alarmed that she also failed to detect the danger. She quickly figured it was sitting in ambush, waiting for her or potentially any prey to walk by. Like with the Longtooths, Bali had trouble detecting hidden monsters and Xibalbans than didn't move at least a little. Her forehead eyes were keen to sound, but it wasn't enough today. Between being half drowned and emotionally distracted, she was at much at disadvantage now as she had been seconds ago.

Tentacles squeezed around her limbs, legs, and throat. They began to slither invasively, one even sliding between her bandeau. Was it happenstance of some creature grabbing whatever it could? Or a Xibalban using sexual sensations as a weapon? She knew both were quite believable. Amongst the barbarians, it was hardly uncommon with some to try such a tactic. And she was barely any better when she straddled Saiya in her web the other day. But then, there were no pretensions of innocence either.

Choking out a cough, she growled and resisted the pull backwards, but her footing was poor on the rain soaked wet sand and she was too drained to use her energy intensive dance fighting martial arts. "Guhh... what do you want...?" she strained out, trying to determine if her attacker was a monster or Xibalban barbarian.

"Just a bit of company maybe. And blood. A lot of your blood. Your compliance is hardly necessary, pretty pretty..." came a bemused high pitched cooing voice. "Didn't expect to see one of your ilk here, but I'm not about to waste the opportunity. Nyee heee heee heee!"

Bali mouthed out a silent curse. Xibalban of some kind, obviously. She couldn't get a look at her attacker without going off balance entirely, which seemed fatal. She reasoned the voice and tentacles could have belonged to one of the Fisher clan, an octopus-like people. They certainly drank blood. But they were strictly orange colored and universally poor shape shifters. Further, they only lived in arboreal settings or underground. This was neither. Purple colored tentacles? It didn't ring an obvious bells. Not that it mattered much now.

Bali squirmed and struggled, but between fatigue, the poor weather whipping at her face, and even more tentacles seizing her, she began to lose her stance and slide back on the sand towards her cruel sounding captor. Wrestling still, Bali refused to make it easy.

"Come closer, that's right, just like that... yes, you're a feisty one, pretty pretty. I'm going to suck you dry, dear thing. But fight back if you wish, it doesn't matter. I can break anyone, least of all you," taunted the voice, lustfully ringing with blood thirst and perversion.

As Bali found herself fighting a losing battle as she began to lose air from frantically struggling while being choked, she knew things were going to get a lot worse shortly.

I take it the majority of...critters roaming around this world tend to be carnivorous.

Often enough, yes. It's like Third Earth on Thundercats- everything wants to kill you or make use of you.

Basically, most sapient Xibalbans require blood, meat, or shadow essence to thrive and these come from other beings, be it animals or other Xibalbans. That said, some Xibalbans can survive for a while on fruits and mushrooms, but these don't give them the blood/shadow essence they need, so they'll eventually go feral, lose their special abilities, or suffer frequent blackout spells/lethargy if they don't get what they need.

Most Xibalban races are based on predator type creatures, so like how Bali shared apples with Karolina but eventually needed to prey on Saiya, they have to feed on living creatures every so often to keep going.