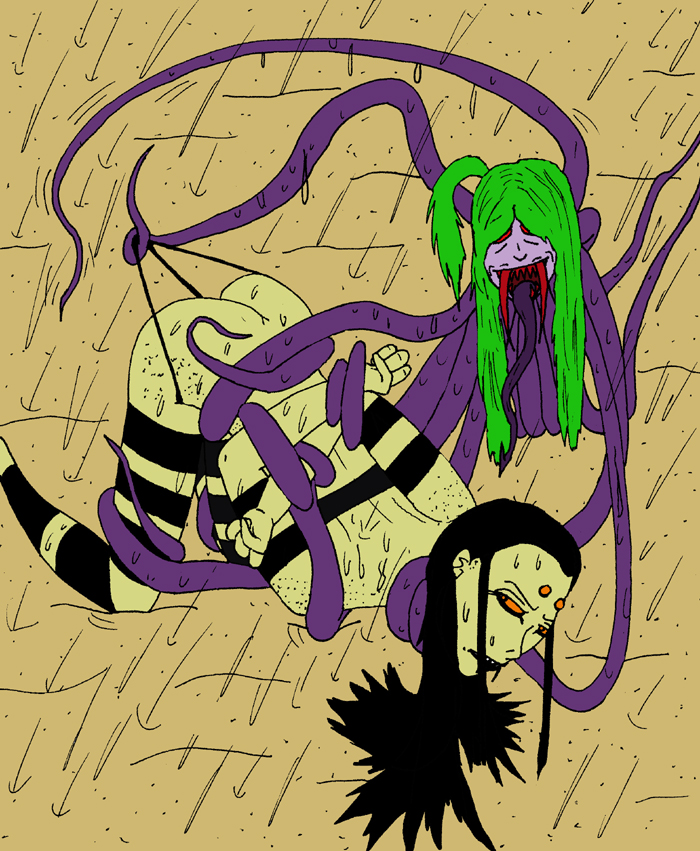 Bali and her aggressor wrestled, but it didn't take long before Bali found herself increasingly on the short end of the odds. At half strength and reflexes from her near drowning, she struck ineffectually at the creature when she could, but the monster never let its face near, instead always keeping Bali at a distance with rubbery tentacles. Solid punches and kicks did nothing to the appendages, leaving Bali exposed to being grappled after failing to achieve any beneficial result against them.

Soon, she was thrown to the wet sand and ruthlessly tangled, as the slippery tentacles curled around her, holding her face down on her knees, as she proved unable to remove the coiled tendril around her throat. She kicked and thrashed, but nothing seemed to work. And before long, she found herself heavily restrained. Tentacles wrapped around her, holding her arms behind her, knees spread, and her neck ever collared, slowly starved of a normal amount of air.

"Yes, yes, feisty indeed..." slurred the creature. She managed to get a look at the thing, but still couldn't place it to any origin. The face was almost hag-like, with vacant wide red eyes under bright green hair. Her mouth was wide with sharp teeth, including two impossibly oversized canines, like that of a saber-tooth cat. The creature's barbed purple tongue tasted the sweat and salt on Bali's skin, no doubt testing for a choice place to drink her blood.

"What even are you?" Bali snarled, as the creature forced her into an embarrassing position of submission. She strained again and again, but the monster merely laughed at her efforts, before tightening its grip almost painfully.

"Does it matter, pretty? But yes, I'll indulge- I go by Argilla, one of the Sandbar Peoples."

Despite her knowledge of the Xibalban world, she had no idea who they were. And as moments passed, it seemed to matter less and less.

"Fine... unf. You have me at a disadvantage," Bali conceded, still struggling almost out of habit. At this point, she knew she didn't have it in her to fight this thing off. Maybe she could parley with the tentacled head creature. "You want blood? If that's all, I'll offer it willingly."

"That's kind of you, dearie- but realistically, I don't need your pity or concessions," Argilla said, drawing closer to her flank. She then parted Bali's legs more. The Death Clan felt a tentacle brush against her womanhood, causing her to gasp slightly.

"Heeey, wait, wait..." Bali finally saw where this was heading. It was perfectly within the many grotesque Xibalban customs concerning winners and losers to be 'taken' by the victor. One could be made an indentured servant, if not enslaved. Used for food and/or sex. Almost anything. The victor could typically enforce a sense of dominance over whoever was beaten and they would be inclined to obey. What Bali did with Saiya was not outside of that quality. The idea was it prevented the loser from being slain so they could live to fight another day. That was the trade off.

When it came to sexual desire, coercion was typically used and the loser typically went along with it. It was a custom that humans hated in Xibalbans due to its connotations. And for this, Bali was at least somewhat glad Karolina wasn't here to see her like this. The poor girl was quite innocent in some ways and even what happened in the sand cave seemed to blow her mind entirely.

Again, Bali felt herself being touched between her legs, and she grunted. She gritted her fangs irritably. Although rare, it was not the first time she had been on the losing end of an inter-species battle. But in her heart, she was not certain she wanted to concede to this barbarian. "Aren't you being presumptuous?" Bali hissed. "I'm not bending my knee to you that easily." Something about Argilla's approach particularly annoyed Bali. She couldn't explain it immediately, but her instincts told her that Argilla hadn't really earned the right to feed or play with her. The Sandbar woman creature was acting too fast, too greedily.

"I think I already have, no?" Argilla crudely teased. A tentacle then slid under the T of Bali's thong and began to pull up and away on it, stretching the panty, exposing Bali. This time, Bali was rubbed skin against skin, making her yelp. "It's very simple, barbarian. I will take my fill of you, have my way, and then kill you and let the fish pick at your bones."

Bali bucked, but it was useless. "Wait, why do you want to kill me? I'm no threat to you. Is this your territory?"

"Nope. Threat or not, there's no reason, honestly," sighed the cruel creature. "I just like to see others suffer. To listen to the screams of the dying while I take everything from them? Blood, dignity, joy... If you think you can talk your way out of this, I'm sorry. That's about as effective as your wimpy little punches and kicks. Now, I'm going to drill a hole in your... let's see... clavicle, I think, and drink you to bones. And I think I'll delve a hole or two down below to keep your blood pumping as fast as it can... I don't like to work for it, dearie."

Bali then realized what her instincts were trying to tell her. In Xibalban society, there were all manner of warriors, raiders, and assassins... but even for those who existed on the fringe of tribal rule, there were codes to be observed. Some Xibalbans were little else than uncontrolled beasts, exiled from their clans. Many Xibalbans were cruel and debauched, but they weren't mindlessly so. They didn't kill without reason, typically. But there was no reason here. It seemed only that boredom compelled Argilla, if her arrogant tone was any indication. For many exiled Xibalbans who went aggressively against tribal laws of conduct, their caste was forever ignored and they were simply titled 'Killers'. A Killer was the equivalent of a serial killer in humanity society... these individuals lived alone when they weren't executed sooner, preying upon anything that would amuse them. No plan, no reason, no loyalty to anyone else.

Once more, Bali felt herself being rubbed against her will. She hissed, noting that the pressure was much stronger and it wasn't sensuous even by their own standards. Everything about the situation felt wrong. There was no way she was going to concede anything to this monster now.

"You're pretty brave hiding over there," Bali taunted. "Figures you don't have an ounce of brave blood within you to actually face me when you do this. Are all your people cowards... or just you?"

Argilla paused for a moment. "Pretty, pretty, those are bold words for one in your position. I'm going to do terrible things to you. Hmm, do you think I'll let you bite me if I meet you face to face? I control your body right now, you'll never be close enough, you know."

"I'm not going to bite you," Bali sneered. "Your too pathetic. I wouldn't waste the venom on you. Go on, hide back there, cowering even from a victim who can't fight back. I'm sure the spirits will sing your praises, hm?"

"Cheeky little pest... fine. You wish for me to tell you, to your very face that you're going to die begging for mercy? No one calls me a coward, little wench," gurgled the gross monster, slinking to meet Bali's face.

Bali closed her eyes for a moment. She had taken the bait. Now, it was time for a desperate play.

Apparently Audrey there doesn't realize playing with your food isn't the best idea, especially if it can fight back.